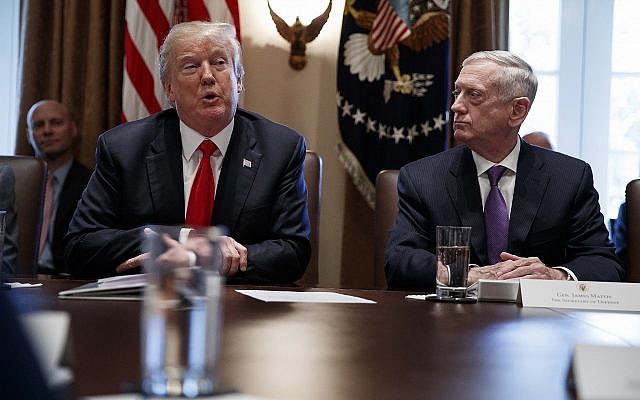 President Trump’s surprise announcement of a complete US withdrawal of American troops from Syria resulted in concern from US officials across the political spectrum and allies across the world. More surprising is how this move stands in stark contrast to Trump’s most outspoken foreign policy positions throughout his presidency.

Three themes that have characterized the president’s foreign policy, even while he pursued his America First agenda, were combatting terrorism, containing Iran, and protecting the security of the State of Israel. America’s withdrawal from Syria threatens all three.

Let’s be clear: when we talk about Syria, a humanitarian and strategic disaster, there is plenty of blame to go around beyond the Trump administration. In particular, the Obama administration, from the beginning of the revolt of Syrians against the brutal Assad dictatorship, failed to show leadership and misread the strategic situation. It was not only a matter of Obama’s not living up to his promise of military action against Assad if he used chemical weapons. A year earlier, when more moderate elements were leading the revolt, the administration stood back when American assistance was needed and could have helped create a different reality in Syria. And later, when the Russians entered the fray to rescue Assad, the president stood by, his major reaction being, the Russians will regret their entry into Syria.

Having said that, the current American withdrawal can only exacerbate the large challenges emerging from Syria.

The president claims we have defeated ISIS as a justification for pulling out. Whether that is true is a matter of debate. But ISIS is surely not the only terrorist challenge in Syria, considering the role that Hezbollah, the Iranian proxy, has played in the battle for Syria. At a time when Hezbollah is building tunnels threatening northern Israel with terrorist attacks and when it still has a significant presence in Syria and can use that presence to open up a second terrorist front against Israel, the American withdrawal sends exactly the wrong message in the battle against terrorism.

Alongside the fight against terrorism, the effort to contain Iran has correctly been a major theme of the Trump administration. Identifying Iran as the greatest challenge to American interests in the region, not only because of its nuclear potential but because of its expansionist activities, has been a consistent Trump theme. While Iran’s role in Iraq and Yemen are part of this expansionism, its entry into Syria and its efforts to set up a permanent military presence there are the most egregious instances of Iran’s expansionist agenda. Instead of developing a strategy to limit and eventually eliminate that presence, consistent with other administration steps to isolate and pressure the Islamic regime, the administration has, in effect, given Iran a free pass in Syria. This undermines the credibility of other efforts to contain Iran and ensures that Syria will remain a strategic menace to the West for years to come.

Connected to this is the subject of Israel’s security. The Trump administration has properly earned the plaudits of the Israeli government and supporters of Israel for moving the US Embassy to Jerusalem and for its overall posture in defending Israel in the international community, whether at the UN or beyond. Less talked about, but in the long run maybe more significant, is the impact of reduced American leadership and reputation in the world and how this will ultimately affect US ability to be of assistance to Israel.

The withdrawal announcement is a concrete example of that intersection. Trump’s desire to have no footprint in Syria potentially leaves Israel having to deal with the deeply threatening Iranian presence close to its border, its greatest strategic challenge, by itself.

This does not mean that Israel cannot defend itself. It does mean, however, that it will not be able to turn to America as a stabilizing force in Syria, and it undoubtedly will intensify Israeli concerns about the multiplicity of challenges it will face, coming from Syria, the Assad regime, Iran, Russia, Iran and Hezbollah.

Only time will tell how this US decision will affect Israeli decision-making about its security and the reliability of the United States as Israel’s long-time strategic partner.

Bottom line: US withdrawal from Syria heightens tensions in the region and continues the evisceration of American leadership in the world.  As we move into 2019, these dynamics will have an enormous impact on the region and the world.