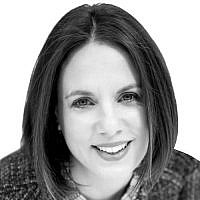 The Blogs
Rivka Kidron
Apply for a Blog
Advertisement
Please note that the posts on The Blogs are contributed by third parties. The opinions, facts and any media content in them are presented solely by the authors, and neither The Times of Israel nor its partners assume any responsibility for them. Please contact us in case of abuse. In case of abuse,
Report this post.

Reportedly, in the weeks leading up to U.S. President Donald Trump’s decision to recognize Jerusalem as the capital of Israel, countless Evangelical Christian leaders had been heavily involved in lobbying the president and his senior advisors to make this long overdue decision.

“I have no doubt that evangelicals played a meaningful role in this decision,” said Johnnie Moore, a California pastor who serves as a spokesman for a council of leading evangelicals that advises the White House. “I don’t believe it would have happened without them.”

It is clear that this is just a latest example of the role that Evangelical Christians play in pro-Israel decisions in the U.S., to the point that this community is arguably the Jewish State’s strongest strategic asset in the U.S.

However, a recent poll demonstrates what some have known for a while, that Evangelical support for Israel is waning among younger demographics.

According to a recent study conducted by Christian group LifeWay Research, over three-quarters of Evangelicals aged 65 and older hold a “positive” view of Israel. That number steadily drops among younger age groups before bottoming out at 58 percent among Evangelicals between the ages of 18 and 34.

Most worryingly, for many younger Evangelicals, Israel is not a burning issue and some simply don’t care. Over 40 percent of those polled between the ages of 18 to 34 answered that they have no strong views about Israel.

This translates into a worrying scenario whereby the kind of Evangelical support and lobbying on pro-Israel issues that we see today will be much harder if not highly unlikely in future generations.

However, all is not lost and we dare not give up on our most important allies.

We need to actively invest in the next generation of Christian leaders to provide them with the tools to better understand the intersection between their faith, its foundations in the Holy Land and support for the modern State of Israel.

As surveys and studies conducted by Birthright demonstrate, a visit to Israel to witness its beauty, creativity, archeological history, religious vibrancy and technological prowess ensure an enduring attachment and understanding of the challenges the Jewish State faces.

With this in mind, Passages was created, in partnership with the Museum of the Bible, which just opened a unprecedented museum in Washington D.C. to document the narrative, history and impact of the Bible, and the Philos Project, a New York-based non-profit promoting “positive Christian engagement in the Middle East.”

The Passages trip to Israel is offering to Christian college students with leadership potential a fresh and innovative approach to experiencing the Holy Land. Our participants encounter the roots of their Biblical faith first-hand and come face to face with the modern-day miracle that is Israel. Upon their return, participants have opportunities to build upon their trip experiences by engaging in further leadership training, with an end goal of being an informed voice for both their Christian faith and for Israel.

This year, Passages has already bought 2,000 students to Israel and will bring even more next year, and is already beginning to make a difference.

We hear from our participants things like: “this trip has placed Israel at the center of my mind”, “more than anything, this trip challenged me to be more vocal about Israel back on campus and in the United States in general”, and “I have a responsibility to tell Israel’s story––and to tell it well. When I think of Israel, I am now able to picture a young, thriving, resilient, loving, and hopeful nation-state that needs our support.”

This trip has become simply a life-defining event for young Christians and all are changed by what they see in Israel when they walk its land, meet its people and grapple with its complexities and challenges.

Moreover, we do not leave the students when their planes return to the U.S. With Passages NOW, the alumni engagement program of Passages, our goal is to turn the trip experience into a vibrant post-trip alumni community that is committed to spreading the spiritual and moral message of Israel on campus and beyond. We want participants to stay engaged, and we are committed to helping them tell their story however it makes sense for them.

This program offers Passages alumni a wide variety of initiatives and assistance like offering help and support to create groups on campuses, writing for local and national publications and other ways to spread their experience to others. We also offer leadership programs and courses, scholarships and internships to create a wide and deep network of support among American Christian youth for Israel across the nation.

Passages is dedicated to building a strong network of engaged future Christian leaders to push against an increasing apathy and indifference towards Israel among their peers.

We believe that not only can we overcome this with our programs, we can even enhance and strengthen support among this community in the years to come, ensuring that the American political leadership remains strongly supportive of the Jewish State.

About the Author
Rivka Kidron is the Co-founder of Passages and a member of its Board of Directors. Rivka’s inspiration and passion for establishing Passages was born out of her role as Advisor for Diaspora and Christian Affairs to Prime Minister Netanyahu, where she managed key relationships with global Jewish and Christian leaders. Passages is the only program of its kind that brings thousands of young Christian leaders to Israel every year to discover the deep roots of their faith, engage with modern-day Israel and develop the leadership skills necessary to make a meaningful impact on their campuses and communities. To learn more visit passagesisrael.org
Related Topics
Related Posts
Comments