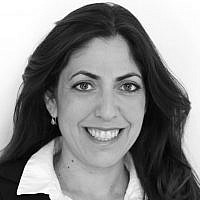 The Blogs
Sarit Zehavi
Apply for a Blog
Advertisement
Please note that the posts on The Blogs are contributed by third parties. The opinions, facts and any media content in them are presented solely by the authors, and neither The Times of Israel nor its partners assume any responsibility for them. Please contact us in case of abuse. In case of abuse,
Report this post.

Following the establishment of a new government in Lebanon last month, which includes Hezbollah’s three ministers, and the fact that both the UK and the US will now put more emphasis is sanctioning Hezbollah or implement existing sanctions – we offer a fresh perspective on restraining Hezbollah’s power in South Lebanon.

In a video published on Al-Jadeed’s website on August 12, 2018, a man from the town of Bint Jbeil (in South Lebanon) addressed the Hezbollah MP Hassan Fadel-Allah at a conference held there. He accused Hezbollah of neglecting the people of Southern Lebanon and declared that residents of this area were dissatisfied with how it was representing them in the Lebanese government. Among other complaints, he cited Southern Lebanon’s poor education and expensive health services, saying: “You need to mortgage your house to be able to afford hospital treatment.”

Watching this video, it is possible to understand how Hezbollah will profit from controlling the Ministry of Health in Lebanon’s newly formed government. Contrary to reports, the story here is not just Hezbollah being free to launder money or provide medical aid to its wounded operatives in Syria, even though it might do both. Nevertheless, the scope of profit is much broader than that. First, Hezbollah’s influence in the government will, and already is, strengthening the Lebanese relationship with Iran. Hezbollah’s “employer”, Iran, aims on opening new dimensions of influence in Lebanon, highlighted by the recent visit of the Iranian Foreign Affairs Minister to Lebanon, soon after the establishment of the government.

Second, for Hezbollah to turn Lebanese residents into human shields, it must earn their widespread and permanent support in the southern region. It has already established this base of support by providing civilians with a wide range of services including education, welfare, health, community activities and others. In fact, for residents of the south, Hezbollah is present in every aspect of their lives.

But its role in the Lebanese government in recent years has left Hezbollah in a problematic place with its base of support. As presented in the aforementioned video, Hezbollah now has both authority and responsibility. It cannot promise its supporters anything that the Lebanese government will not provide – for Hezbollah is very much a part of that government. Yet it must fight for the rights of Southern Lebanon’s residents. Controlling the Ministry of Health will enable Hezbollah to improve health services for all southern residents, and since most of them are Shia, any improvements in the south will help consolidate and strengthen support for the terrorist group — even as a member of the government.

With the situation so complicated, what can be Done?

Hezbollah now controls the Ministry of Health, with the fourth largest budget in the Lebanese government; which could provide an opportunity to impose sanctions on the commercial connections between the Lebanese Health system and the American companies. An excellent article in The New York Times, “As Hezbollah Rises in Lebanon’s Government, Fears About U.S. Response Follow,” skillfully analyzed the election results. But the United States is behaving oddly. On one hand, it considers all of Hezbollah — civilian and militant — a terrorist organization and places it under sanctions. On the other hand, it recognizes Hezbollah as a member of the Lebanese government.

Moreover – will the US really increase its pressure on Hezbollah now that it controls the Ministry of Health? Or will it become increasingly difficult to impose sanctions on Lebanon’s health system because its minister, Nasrallah’s personal physician, is not an official member of Hezbollah?

Furthermore, the Lebanese public may view sanctions against the Ministry of Health to be immoral, thus driving them to support Hezbollah even more fervently, as a challenger to Israel and the United States.

Not enough attention has been paid to the fact that a member of Hezbollah has been the Minister of Sports and Youth for two terms in a row. Football, or soccer, is known for banding people together and is immensely popular in the Arab world – specifically in Lebanon. Hezbollah has its own soccer team and its own youth movement. Both require permits to operate and perhaps receive some level of funding from the Ministry of Sports and Youth. Moreover, Hezbollah has an organization called “Sports Recruitment” that coordinates all sports activities on behalf of the organization.

Hezbollah benefits from this investment in sports in several ways. First, sports can serve as an important tool for ideological indoctrination of hate to Israel, spreading messages, and introducing current and potential supporters to the values ​​​​of Hezbollah, the Shia, and the Islamic Revolution of Iran. In addition, sports provide income for the organization, especially ever since the member of Hezbollah was appointed minister in December 2016. Finally, the organization uses sports to approach the country on a general level. This includes, for instance, presenting an annual marathon for Lebanese Independence Day and hosting sporting events for the Christian communities on Christmas Day and New Year’s Eve.

It’s worth examining how sanctions are enforced in this area, which would harm Hezbollah’s public support without harming the welfare of the Lebanese residents or the country’s economy – something the US and the UK highly values.

Hezbollah has essentially increased its power in Lebanon’s new government. It now has three votes in the government, granting it the power to veto governmental actions with the strength of its bloc, so long as it includes the ministers in Michel Aoun’s party that support Hezbollah and the independent minister who cannot vote against Aoun – in line with internal agreements. Contrary to many assessments, Hezbollah as a member of the government has not moderated and is highly unlikely to moderate its positions against Israel and the United States. It will not surrender the weapons of ‘Resistance’ (i.e. Hezbollah), and being part of the Lebanese government can assist in assimilating the formula: the People, the Army, and the Resistance. In effect, turning the ‘Resistance’ into another legitimate militia alongside the Lebanese army without being responsible to the Lebanese government.

All of this means more money flowing through the Lebanese system to Hezbollah. It will be wise to monitor and respond to these activities with sophistication. We must aim to not only prevent the money from funding terrorism but also takes steps toward addressing the roots of terror.