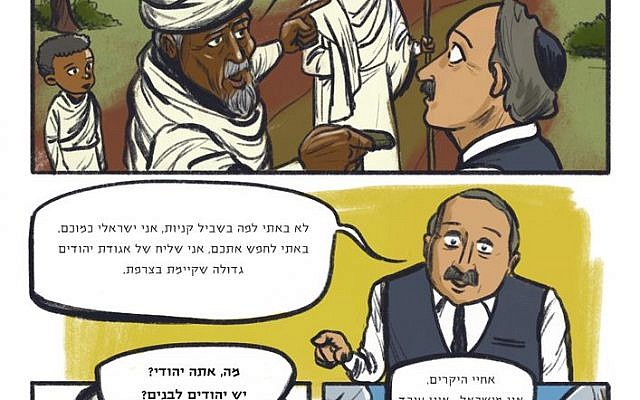 This past week I came across the impressive and poignant project of Yossi and Ruti Turetsky, who together with their families and supporters strive to bring the inspiring story of Ethiopian Jewry’s history, culture, and eventual Aliyah to its rightful place at the forefront of Israeli and Jewish consciousness. Four years ago, the powerful musical clip “A Godly Miracle” was disseminated across social media, featuring Yossi — the child of immigrants from England – and his wife Ruti, who immigrated to Israel from Ethiopia at age 6 during Operation Solomon. It’s an ode to the collective return of the Jewish people to the Land of Israel, and like Yossi and Ruti themselves, the message is truly inspiring.

Since the release of the video they have lectured, held workshops and staged theatrical performances across Israel with one goal in mind: to connect the Jewish public in general, and Jewish children in specific, to the legends of Ethiopian Jewry. To that end, they have developed a comic book geared for children from 1st – 8th Grades designed to spark interest and generate awareness about the unique customs and culture of Ethiopian Jewry, combat stigmas, and to educate about this important chapter of the modern-day Exodus of the Jewish people.

Their efforts have been steadily gaining traction, and their positive campaign has been the subject of national news coverage in Israel. However, their story has not yet reached the English-speaking news outlets, and therefore the Anglo Jewish world has yet had the opportunity to partner in this important project.

The stories we tell our children are an integral and lasting part of their personal identities. Whether told by parents or teachers, at home or in school, they serve to shape the way our youngsters view themselves, their community, and the world at large. And certainly within Jewish tradition, the collective storytelling of our people’s history – our triumphs, our tragedies, and our national yearnings – are at the forefront of many an educational encounter.  The telling of this important story must succeed, so that it may combat ignorance, stigmas, and stereotypes of the Ethiopian Jewish community too pervasive in today’s culture. And Yossi and Ruti need your help. They have embarked on a fundraising campaign on “HeadStart” to garner the funds needed to create the educational comic book that can have an immeasurable positive impact. There are only 14 more days left for the Turetsky’s to reach their goal, please visit the link below and give generously as able. Your contribution will go a long way in creating greater Jewish unity and appreciation for Ethiopian Jewry.