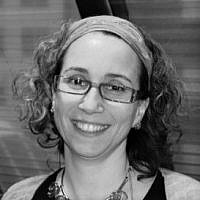 The Blogs
Claudia Kreiman
Apply for a Blog
Advertisement
Please note that the posts on The Blogs are contributed by third parties. The opinions, facts and any media content in them are presented solely by the authors, and neither The Times of Israel nor its partners assume any responsibility for them. Please contact us in case of abuse. In case of abuse,
Report this post.

July 18th commemorates 23 years since a bomb was detonated in a van parked in front of the AMIA building, the Jewish Community Center in Buenos Aires. Twenty-three years since 85 people —  including my mother, Susy Wolynski Kreiman–  were killed, and hundreds more were injured.

Every year, in commemorating this date, the Jewish Community in Argentina focuses on the importance of memory and the importance of fighting for  justice. This year artists, actors, writers and celebrities all  participated in a very moving video, called Libro de la Memoria (“The Book of Memory”),which compiled quotes from artists on the topic of memory and dedicated to the victims of the bombing. A statement by Argentinian poet Silvina Ocampo, caught my attention: “La mentira origina miedo y el miedo origina la mentira”. Lying causes fear and fear leads to lies. Or, as I understand it: The lack of justice, the lack of truth, creates fear — and it is fear that also makes us lie and accept dishonesty. Ocampo, and all the artists whose work is quoted in the film remind us of the dangers of forgetting, and of giving up our fight for justice. When there is no memory, there is no justice, and the lack of justice is an affront to our memory.

I heartbrokenly confess that at this point I have little confidence that Argentina will ever pursue justice against the perpetrators off this horrendous attack. Part of me has given up hope that, one day, justice will be served.

But in my daily life and in my commitments to the world, I have not given up. 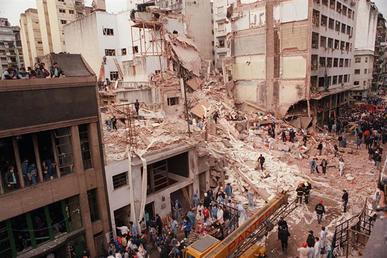 This year, in response to the election of  President Trump, I have become more involved in speaking up for immigrants, refugees, and minorities who have come under attack as this administration tries to instill fear of those who are different from us, creating policies that are racist, xenophobic, and Islamophobic.

I have participated in rallies and protests against the Muslim Ban in NYC and in Boston.  I have spoken at rallies supporting immigrants and advocating for the Safe Community Act in Massachusetts. The congregation that I lead, Temple Beth Zion, in Brookline, MA, is actively involved with other faith communities in taking responsibility for the care of  two families seeking asylum in Brookline. Our congregation has joined the Sanctuary movement and is prepared to care for undocumented immigrants in danger of deportation.  I have rallied and prayed with Muslim brothers  and sisters and supported the local Boston Muslim community, creating bonds of friendship and trust.

A few months ago, someone who knew my mother saw  that I was getting involved in these causes, especially against the movement against the Muslim Ban, and asked how I could do this.  She spoke about Muslims and immigrants as dangerous.  She tried (as others have tried) to appeal to the fact that my mother was killed by terrorists. For her, as for many others, the presence of “the other” among us evokes an urge to create walls and bans and to close our doors.

I know she is not motivated by hatred — she is motivated only by the desire to protect those she loves from terrorism. But I believe that alongside doing what is necessary for our physical protection, terrorism must be fought with love.

I fight terrorism by building communities of love and respect. By taking care of those in need and those who are wandering the world with no place to call home; those who are in danger and who are scared.  I fight terrorism by getting to know the other, the one who is different from me, by hearing their stories and fears and by sharing mine. I fight terrorism by maintaining hope in humankind even when it is difficult to do so, educating new generations about goodness in the world and about our responsibility to fix the brokenness we encounter.

The immigration policies that the current administration advocates are policies of fear. Fear begets fear.  Fear undermines truth and cultivates hatred. And hatred can not be fought with more hatred.

The Rabbis teach us in the Talmud:

“If a human being sees that suffering is imposed upon him/her, he/she has to check his/her action”. (Brachot 5a)

As it is often understood, this teaching can be very challenging. It seems to propose self-blame for any evil happening to a person, or victim-blaming when directed towards another.

However, I interpret this text to mean that when confronted with suffering we should check our actions and see what influence we may have in shaping the future. I have seen darkness and hatred and suffering. I have been a victim of terrorism. What forms of power has that put into my hands that might enable transforming darkness into light?  When encountering brokenness, hatred, and violence in the world, we are reminded that no person exists, or acts, in a vacuum. We are all part of a global community, and in this world of vast interconnection, no one is without responsibility; it is upon each of us to check our actions and see how can we shape a better future for all. This must be done with great care and awareness, for even actions done in the spirit of love may have unanticipated effects. 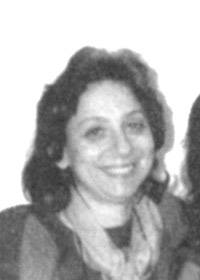 My mother, Julia Susana Wolynski Kreiman (Susy),  was a devoted mother, wife, friend, and social worker. She ran the employment office at the AMIA, where she spent her days trying to find jobs for people who sought her help. She loved her work and was committed to helping those in need, in every way she could. She, together with my father, taught me to celebrate Shabbat, to open my home, and to live a life of meaning, with commitment to our tradition, to those in need, and to a path of justice.

I continue to stand today in trust that we can create a new reality; that we must, for there is no other alternative.

I continue to stand today and ask for justice, because not to do so means giving up the possibility of a world where these atrocities no longer happen. And even if justice itself never comes, so long as there are people willing to speak up, to stand up, who refuse to accept a world of numbness to death, violence, and killing, there will be hope and possibility for a better tomorrow. Life and hope reside in the continuing struggle and in the commitment to working for justice. I ask for justice, because I want a brighter world for my daughters.

Nothing will bring back my mother and the other victims, but our commitment to a life of meaning and the pursuit of justice will uphold their memory and ensure a brighter world for our children. To honor my mother and all that she stood for, I will never give up.

We remember today 85 victims. We say PRESENTE (they are present, they are here with us today), as is customary in commemorations of the AMIA bombing, after each name:

About the Author
Rabbi Claudia Kreiman is a rabbi at Temple Beth Zion in Brookline, MA. She grew up in Santiago, Chile. In 1994, Rav Claudia’s mother, Susy Wolynski Kreiman, was killed in the Asociación Mutual Israelita Argentina (AMIA) bombing in Buenos Aires. Rav Claudia moved to Israel in 1996, received smicha, and has since energized TBZ’s prayer through the addition of song and music, drawing members and visitors alike to Jewish prayer. Rav Claudia is married to Rabbi Ebn Leader, who is on the faculty of the Rabbinical School of Hebrew College. They have two daughters, Alma and Ariel.
Related Topics
Related Posts
Comments