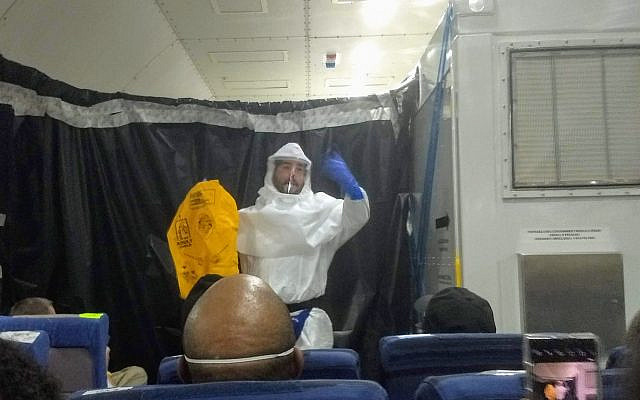 “Our townsfolk were not more to blame than others; they forgot to be modest, that was all, and thought that everything still was possible for them; which presupposed that pestilences were impossible. They went on doing business, arranged for journeys, and formed views. How should they have given a thought to anything like plague, which rules out any future, cancels journeys, silences the exchange of views. They fancied themselves free, and no one will ever be free so long as there are pestilences.”

We were packed and ready to go. The instructions were to arrive at the US Embassy in Dakar by 1:00 PM with our passports and all our luggage. In total we had packed seven suitcases, a stroller, four carry-on bags and enough food to last us and the boys for a few days of travel. Our landlord had come over to take the keys when, at 11:30 I checked my email “IMPORTANT CHANGE IN FLIGHT SCHEDULE” our flight was delayed until tomorrow.

The hardest part about the past few weeks for us was the sense of a lack of agency. We are used to being in control. When we want to go somewhere, we do it. When we need something, we get it. Once we decided to leave Dakar, we lost a large part of the control over our lives. There were no plane tickets to purchase, rather we had to hope that the U.S. Embassy would accept us on their emergency flight, despite the daily emails reminding us that “Due to large demand, not everyone who responded will get a seat on this flight.” Even once we received confirmation that we were on the flight, we were informed that “although we have confirmed your reservation for Thursday’s flight, you are not guaranteed a seat at this time.” Living with this high level of uncertainty is incredibly unnerving. Bina and I tried very hard to remain calm and composed during this period, nevertheless the uncertainty and lack of clarity was challenging for ourselves and our children. Especially for our four-year-old, for whom having a schedule provides a sense of security and safety. And now, after telling him and ourselves throughout the week that we would be flying on Thursday, apparently the flight was now changed to Friday morning.

In addition to the fears for health and livelihood, I think that one of the most challenging parts of this entire experience is the realization that we are not in control. Around the world people are stuck in their homes or on their blocks. They no longer have the freedom of movement, the freedom to assemble, the freedom to go anywhere or do anything – daily activities we take so much for granted. But more than that, the entire world is confronting a deeper, scarier truth – that we are not in control of our own health and our own lives. No amount of money or privilege can save you from this virus. While it disproportionally impacts poorer communities and neighborhoods, plenty of affluent people have gotten sick and died as well.

We spent most of Thursday in a daze thinking about what else we may need to pack, or if there are any last-minute details that we should think about before we leave. On Thursday evening we put the children to sleep and sat down to try to relax. I looked at my phone and saw a new email titled: “Clarification on weight allowance for April 3 flight.” ‘Uh Oh’ I thought to myself. I opened the email and learned that while the previous emails implied that every person was allowed two 23 kilo bags, actually, every person was allowed only one bag on this flight. It was 8:00 PM. Our taxi was coming to pick us up in twelve hours, and now we had to get rid of half of our belongings and leave them behind in Senegal. I wanted to cry.

We called up good friends of ours who work for the UN, and are helping manage the budding crisis in West Africa, and asked them if they could keep our bags. We then began to triage our belongings. What did we need and what was excess? What could we live without for a few weeks, months, or perhaps never see again? We only brought with us our most essential and personal items that reminded us of home. Yet half of it had to go.

My wife was reminded of an assignment she had in the Israeli army years ago. Her unit was told that they should go home for the weekend and return with all their warm clothing for a long week spent camping out in the cold. Everyone came back with a suitcase filled with winter clothing. When they arrived at their base on Sunday they were told that the entire unit could only bring one suitcase and that they only had fifteen minutes to downsize. In the end, everyone brought with them a pair of socks, long underwear and a jacket. Everything else was left behind.

The process of quickly repacking our bags and saying goodbye to half of our stuff was probably the hardest part of this entire process for me. Yet, at the same time there was something liberating about this experience. It helped remind me how many things we own that we really don’t need. What do we really need after all? Warm clothing, food, a safe place to sleep and family. As we went through our belongings, we reminded ourselves how lucky we were to have these basic things, even if we were leaving behind so many other items we cherished. Even as so much of our life felt completely out of control, we began to feel a deeper appreciation for what we had.

With all of this in mind we couldn’t help but think about the upcoming Passover holiday. The holiday of freedom. I began to realize some deep ironies about Pesach which I had not thought of before. The Jewish people were freed specifically at a moment when it was impossible for them to leave their houses. God had commanded Moses to tell the Jewish people to stay at home and close their doors. In order to be free, they first had to be confined to their homes, only then could they leave. Like us, the Jewish people left in a great hurry and had to leave behind much of their belongings. Why were these necessary components of freedom? Why did the Jews need to be stuck at home in order to be freed?

On our flight from Dakar to America I started listening to Albert Camus’ book “The Plague” which describes a plague that falls upon a town in Algeria. “They fancied themselves free, and no one will ever be free so long as there are pestilences.” Can there really be no freedom when there is a plague and suffering? In many ways, everyone’s lives right now seem to be the farthest thing from free. We are scared and confined to our homes. However, the freedom Camus describes is the freedom to travel, the freedom to go to coffee shops. These are not real freedoms, but rather pleasantries. Passover, I have come to appreciate, teaches us about a much deeper, personal, inner freedom. We can be free even if we are confined to our homes. In fact, the Jewish people only became free when they could not leave their homes! The freedom of Passover is a freedom of spirit, the freedom to be content where we are and with what we have. It is the ability to cultivate an inner freedom, one which is based upon realizing that we have what we need and do not need more. In the past week my family has left our home, left behind many of our favorite belongings and have moved to a temporary home in America, unsure of what our next steps will be. This has been a tumultuous and challenging week for us, but there has also been something truly freeing and redemptive in this process. We have a deeper appreciation for our health, family, and community than we have ever had before, and we have hope for a better future.

About the Author
Ariel Fisher is an American rabbi who recently moved to Jerusalem after living in Dakar, Senegal for a year and working as a campus rabbi at Princeton University for four years before that. He uses this platform to reflect on his unique life experiences and connect them with Judaism and the Torah. He is always happy to hear feedback from his readers!
Related Topics
Related Posts
Ariel Fisher
Comments