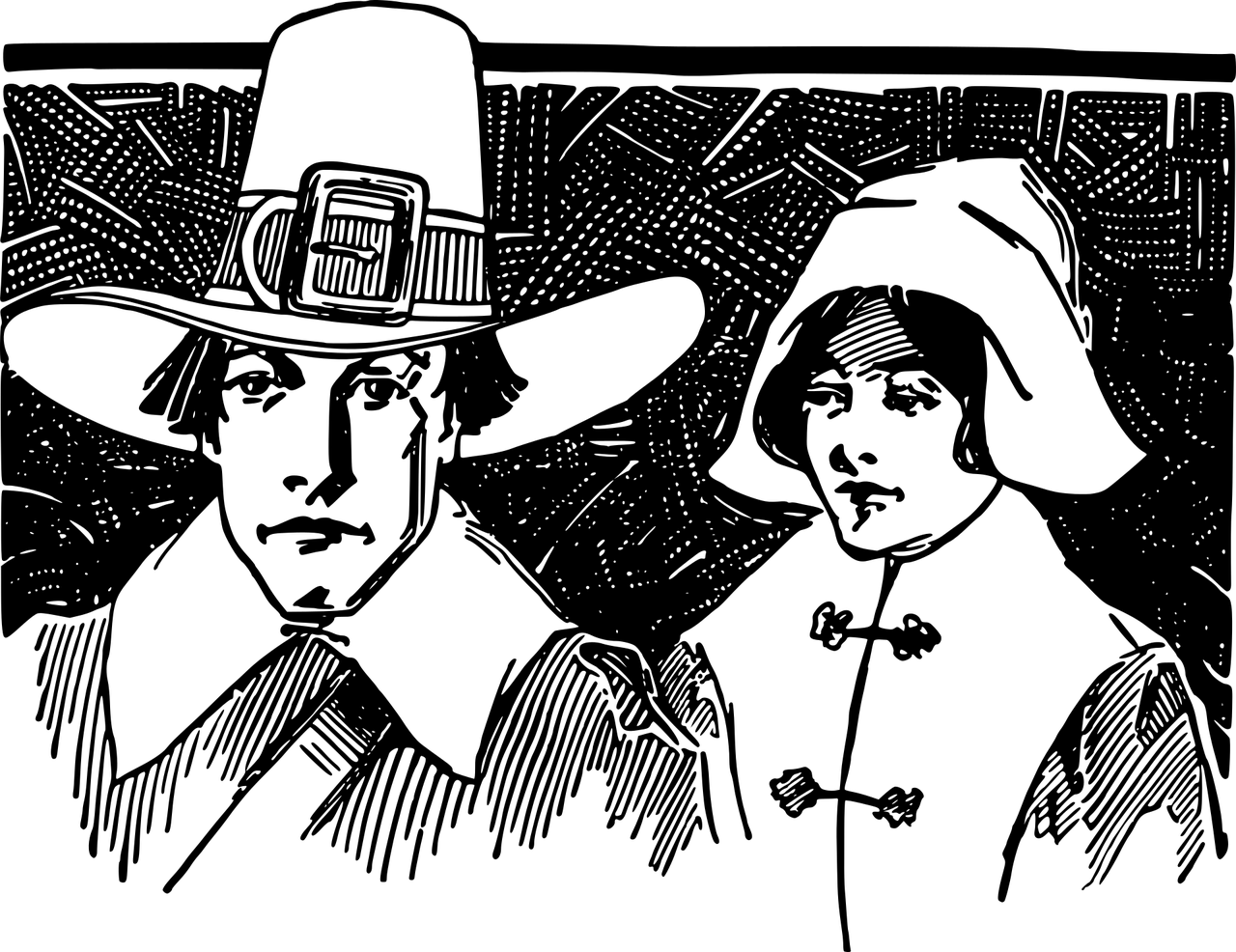 When was the first Thanksgiving? Most tellings of the story place the first Thanksgiving at 1621, a year after the Pilgrims first arrived in North America, once they had managed to put down some roots, and to successfully survive their first year in a new place. However, a ceremony of gratitude actually took place a year earlier, in 1620, shortly after their arrival, when William Bradford gathered the group and recited some words of devotional thanksgiving, words that he quoted from Psalm 107. At that point, the Pilgrims were in bad shape. They did not know how to cultivate the land, they were still living on the Mayflower, as they did for several months while they built houses, and in fact, in the following few months half of their number would die. And yet, as they arrived at their new home, they paused to give thanks. It wasn’t a big meal– they were running out of food. It wasn’t a big celebration. It was an expression of relief at having made it alive through their trans-Atlantic voyage. 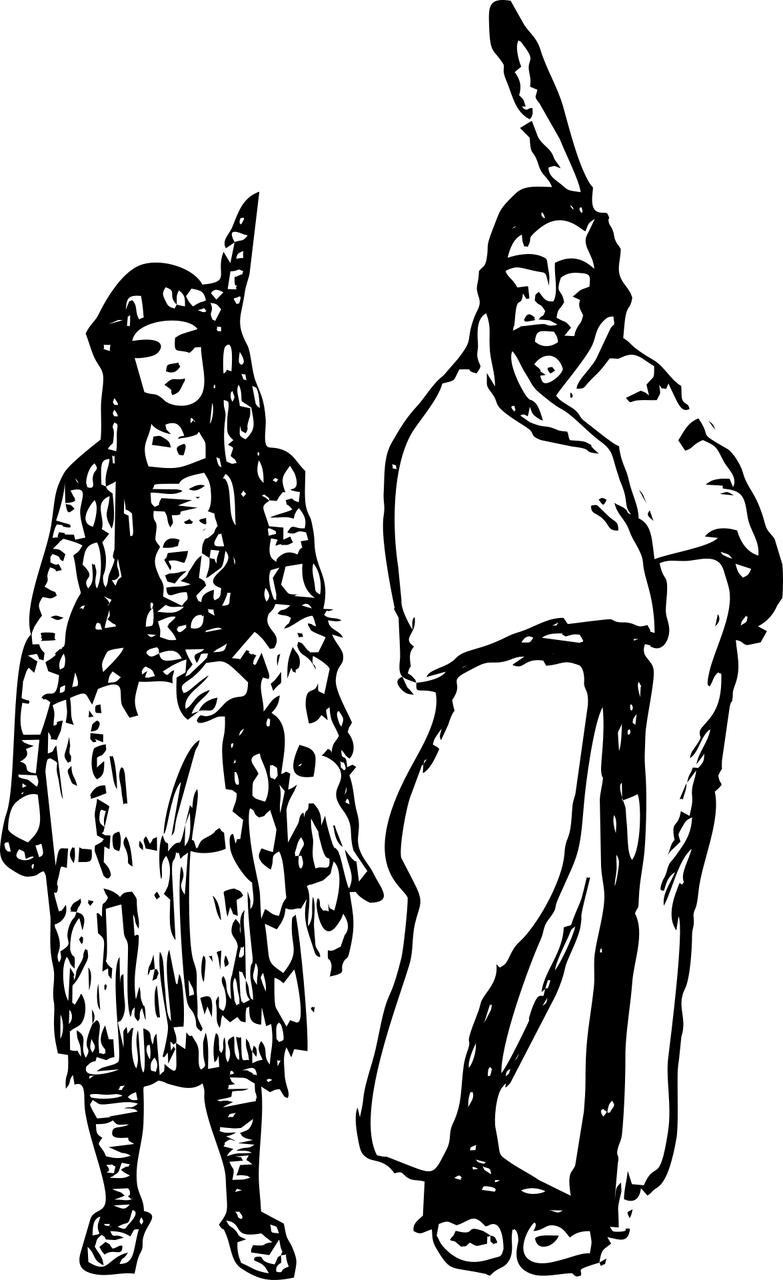 Of course, there were people for whom the arrival of the Pilgrims was far from a cause for celebration, and it has taken far too long to call attention to the experience of the indigenous people who lived here before Europeans arrived. At the same time, this story highlights the fact that there is something about moments of distress, moments of anxiety, moments of fear that can, somewhat paradoxically, make us very aware and grateful for that which we do have.

In this week’s Parashah, Jacob starts out in a low place. He has fled his home in fear of his life. He doesn’t know where he is going to end up, or how he will protect and sustain himself. And yet, he has a dream that first night where God speaks to him, and gives him assurance that he will never be alone. That message is all he needs to shift his perspective, and to offer appreciation for the closeness to God that he has been able to experience. “How awesome is this place! This is none other than the abode of God, and that is the gateway to heaven.” (Genesis 28:17)

Jacob goes through a reversal of fortune, transforming over the next 21 years into a wealthy man with many family members. And yet, throughout his life, the times when he gives thanks are the times when he is most vulnerable. Next week, we will read about the gratitude he expresses as he anxiously awaits his reunion with Esau, who he fears may try to kill him. He tells God, “I am unworthy of all the kindness that You have so steadfastly shown Your servant!” Once again, his fear makes him realize how fortunate he is to have what he does have. 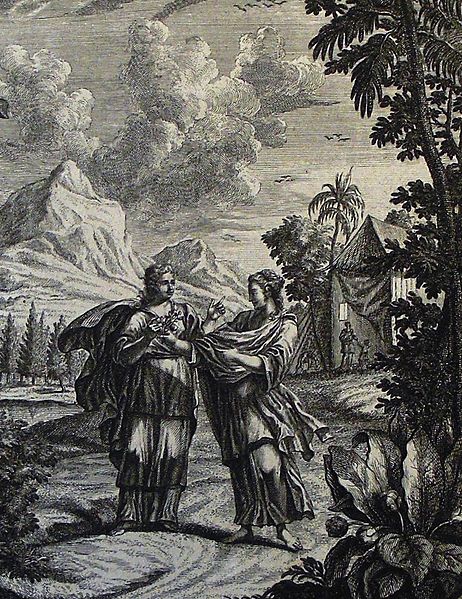 Another character expresses gratitude in this parashah, and this character has far less control over her life than Jacob does over his. Treated as a pawn by her father, to be gotten rid of in exchange for monetary gain, Leah marries Jacob disguised as her sister, knowing that she is being forced to enter into a marriage with a man who doesn’t want her. She then spends much of her marriage desperately trying, unsuccessfully, to get her husband to love her. The prayers she offers as she names each of her three children reflect her desperation. When her first child, Reuven, is born, “She declared, “It means: ‘God has seen my affliction’; it also means: ‘Now my husband will love me.’” (Genesis 29:32) At the birth of her second child, she says ““This is because God heard that I was unloved and has given me this one also.” (Genesis 29:33) And at the birth of the third, she says ““This time my husband will become attached to me, for I have borne him three sons.” (Genesis 29:34) It’s heartbreaking! The only control Leah has in her life seems to be over the names of her children, and as she names them, we see what she cares about most– and what she will never have. Leah pins all of her hopes to gain her husband’s love on her fertility, something she also has no control over, and yet Jacob does not seem to notice.

When Leah’s fourth child is born, we still hear nothing from Jacob, but shockingly, Leah suddenly changes her tune. She names him Yehudah, Judah, saying, הַפַּ֙עַם֙ אוֹדֶ֣ה אֶת־יְהוָ֔ה “This time, I will praise God” (Genesis 29:35). And then, abruptly, she temporarily stops having children.

What has changed? A midrash in Genesis Rabbah offers an explanation: Leah knows that she has now had more children than the “average” amount for each of Jacob’s wives. Jacob will end up having 12 sons, and Leah has now given birth to 4. Now that Leah has had more than her “fair share,” she gives thanks to God.

I’d like to look at another possible explanation for Leah’s gratitude at Judah’s birth, this one offered by the 19th Century commentator known as the Netziv. He suggests that Leah had a prophetic vision. She has learned that her fourth child would be intelligent and brave, and thus worthy of praise, leading her to give him a name that means gratitude. Judah’s name is the one that we all go by– we are Jews, Yehudim. So maybe she is grateful for the specific child that she has given birth to, so special, that he will become the namesake of the entire Jewish people.

Or, perhaps, maybe Leah has undergone a more radical shift. It may be only her own internal perspective, but just maybe, she has now managed to find comfort, and joy, in her children, apart from the status and from her husband’s attention that she had hoped they would give her. As the rabbis say in Pirkei Avot, Ethics of the Fathers, “איזהו עשיר? השמח בחלקו.”  “Who is wealthy? One who is happy with their lot” (Avot 4:1). Perhaps, Leah has, at least temporarily, become happy with her lot.

Now by the way, it isn’t easy to stay in the place of gratitude, and Leah does continue to struggle to stay content.  When she stops giving birth, she sends her handmaid Zilpah to have two children with Jacob, and then she herself eventually has three more as well, and each time, as she names them, she continues to express gratitude, but it is mixed with her old sense of longing. For example “God has given me a choice gift; this time my husband will exalt me, for I have borne him six sons” (Genesis 30:20). It’s not surprising– Leah’s pain is real! She is still marginalized, still unloved by her spouse, and still lacking in real control over her life. Of course she wishes for her life to change! The fact that she reaches out to God at her moment of pain is touching, but it doesn’t change the reality of the difficult life she leads.

It can be a challenge to separate being grateful for what we have from the idea that if we had more, we might be even more grateful. But for both Jacob and Leah, having more — in Jacob’s case, more wealth and a large family, in Leah’s case, more children than her sister did– didn’t necessarily mean more happiness. Their stories remind us that gratitude does not always track with how much we have. 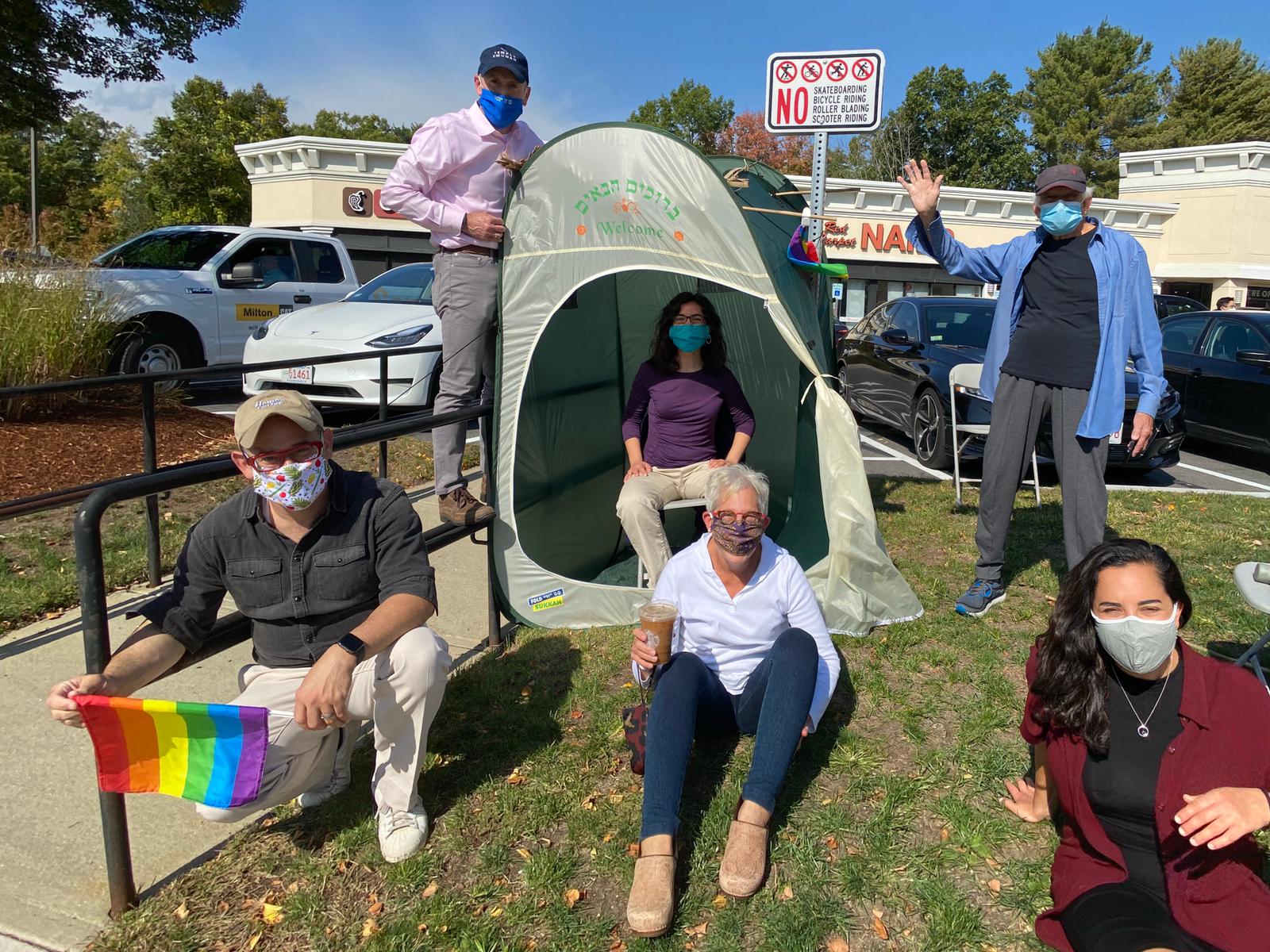 Two and half weeks ago, the Temple Emunah religious committee had its annual High Holy Day review, when community members were invited to share their reflections on the High Holy Days. It’s a chance to identify what went well and should be replicated, and what we might want to do differently next year. This year, of course, the High Holy Days were different from any year before. Many of us approached them with trepidation and with disappointment. And yet, many people that we heard from shared that this year was the most meaningful High Holy Day experience they have ever had! Based on the volume of such feedback we received, I would guess that a number of us here today had a similar reaction, to one aspect or another of the High Holy Day season. Being able to find meaning where we feared only loss and disconnection was, in itself, so powerful that for some, it exceeded the meaning we remembered finding in years when we were able to celebrate as we were accustomed. 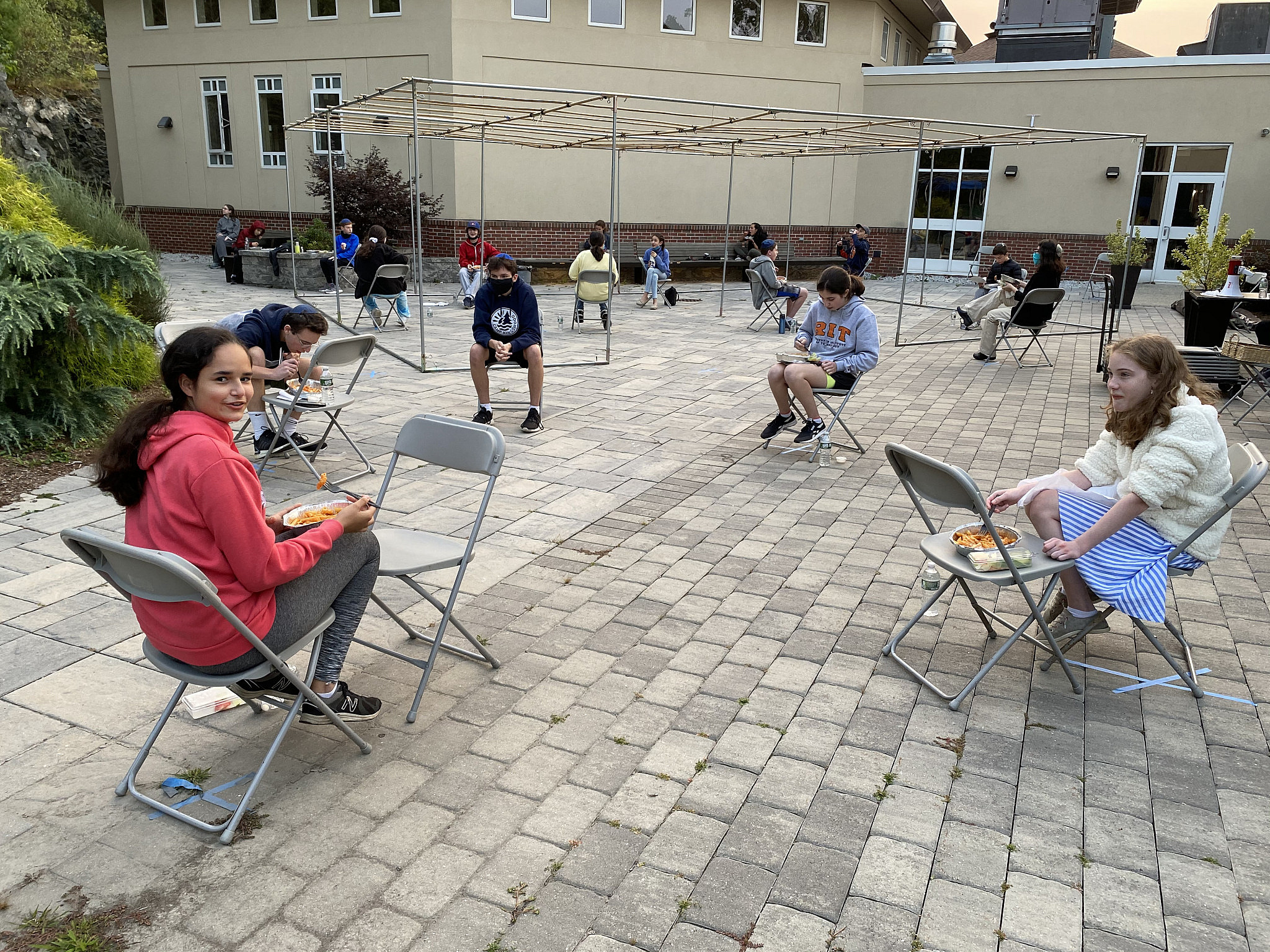 As we continue to endure this pandemic, and as we enter what looks to be a challenging winter, I hope that Jacob’s and Leah’s example can continue to offer a path forward for us. Gratitude won’t fix our problems. It won’t eliminate the Covid fatigue, and it won’t erase the pain of loss, the distress caused by illness, the loneliness of being physically separated from family, friends, and community, the financial stability for some, and the many other challenges that this winter has in store. No matter the Covid fatigue and the other challenges ahead, instead of ruing (or focusing on) what we have lost, instead of dwelling on what we can’t do during this time, may we all be blessed to find something in our lives that bring us joy, and to have the fortune to find gratitude for that which we have.