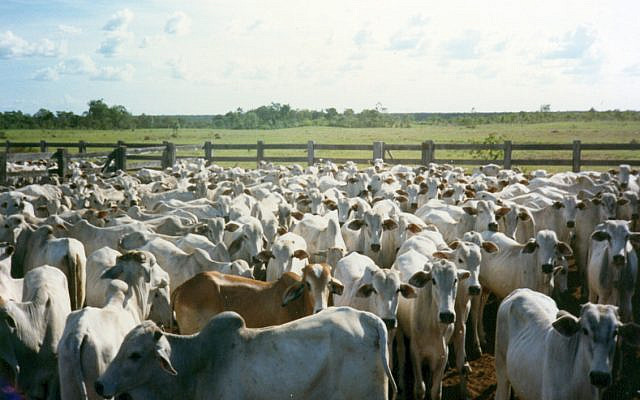 Few people have issues slaughtering a cow, beating the hide into leather straps, creating black boxes, and then wrapping them around our arms and head. And yet, they struggle when they open up the section in the Torah dealing with animal sacrifice…

I was once participating in a rabbinic seminar when the presenter suddenly asked all the rabbis to rise. He then challenged us, “After reading the first two Books of the Torah replete with stories and flowing narrative, we open up the Book of Vayikra and encounter minute details about various sacrifices offered in the Temple in ancient times. Whoever struggles with delivering a meaningful sermon during Vayikra, stand on this side of the room. Whoever is just as comfortable in Vayikra as they are in Shemot, stand on the opposite side.”

I took the latter side while my friend took the former.

“You’re lying,” he alleged, pointing his finger at me, while smirking as a friend does. “You can’t possibly find Vayikra as straightforward as the previous two books. Be honest with yourself and come over to this side of the room.”

“Actually, I find it no different,” I responded. “My style and sources, admittedly, change a little, but there’s always ample material to work with.”

“What do you mean?” he inquired curiously. “Which commentators do you switch to?”

“I often turn to the Chasidic masters,” I explained. “They tend to offer esoteric elucidations of the sacrificial service, revealing the meaning behind all the little details.”

“Oh, please!” he replied. “You know you’re cheating! Basically, you’re saying that you don’t really talk about the Torah text, but lofty homiletic ideas transposed onto the text, simply because we can’t relate to those ancient rituals. I don’t have a problem with you doing that but be honest with yourself: you’re not really talking about the sacrificial service. You’re just reimagining the parsha to find meaning beyond the text!”

“Actually,” I said to my friend, “we don’t even need to go to Chasidic thought to appreciate that there’s more to the sacrifices than meets the eye. It’s already in the Gemara . . .”

In Temple times, the prophets divided the people into twenty-four groups called mishmarot. Each week, a different set of Kohanim and Leviim would go up to Jerusalem, accompanied by a number of Yisraelim, to offer the sacrifices and serve on behalf of the entire nation. The remaining Yisraelim would gather in their various town squares for the week, engaged in communal prayer, called the maamad. The maamad service consisted of fasting, praying, and reading the creation story from the Torah. The Talmud in Tractate Chagigah describes the spiritual power of the maamadot:

Rabbi Yaakov bar Acha quoted Rav Asi: Were it not for the maamadot, heaven and earth would not continue to exist, as it is stated: “And he (Avraham) said: Hashem God, by what shall I know that I shall inherit it (the Promised Land)?” Avraham said: “Master of the Universe, perhaps the Jews will sin before You. Will You treat them as You did the generation of the flood and the generation of the dispersion (and reject them)?” He said to him: “No.” He said before Him: “Master of the Universe, tell me, with what shall I inherit it?” He said to him: “Take for Me a three-year-old heifer, and a three-year-old goat…” (Hashem instructed Avraham to bring a sacrifice, indicating that the sacrifices would ensure his descendants will not be rejected by God.) He said before Him: “Master of the Universe, this works out well when the Temple is standing, but when the Temple is not standing, what will become of them?” He said to him: “I have already enacted for them the order of korbanot. When they read them before Me, I will ascribe them as though they had sacrificed them before Me and I will pardon them for all their transgressions.”[1]

Every day, in the introductory section of Shacharit, we read the portions about the sacrifices, the korbanot. It’s often quipped that coming late to shul means that your korbanot are sacrificed. But if we only appreciated the power of the korbanot recital, we would prioritize that section above all other parts of the davening. As a result of Avraham’s negotiation with the Almighty, reciting the korbanot grants us a pardon for all our sins. That should offer more than sufficient motivation for ensuring we never skip our korbanot!

Of course, it’s not just about mumbling away the words thoughtlessly. Time and again, our holy prophets of yore remonstrated against soulless sacrificial gestures. Just like it was meaningless to offer a sacrifice without the appropriate intent, one must concentrate when reciting the korbanos section of davening. What should our focus be? The Divrei Yoel teaches that the daily recitation is our opportunity to commit to mesirut nefesh — self-sacrifice, for Hashem throughout the day.[2] With each step we take, will it be one that seeks our personal comfort, or will we overcome our own needs and wants and ask what Heaven wants of us?

In a similar fashion, the Ramban offers a suggestion that watching the sacrificial service in the Beit Hamikdash would evoke within the individual feelings of intense teshuvah. As one observed each part of the animal being offered upon the holy altar, a different element of the person’s behavior is acknowledged. He writes:

Since man’s deeds are accomplished through thought, speech, and action, God commanded that when man sins and brings an offering, he should lay his hands upon it, corresponding to his actions. He should confess his sin verbally, corresponding to his speech, and he should burn the innards and the kidneys in fire, for they are the instruments of thought and desire; and, the legs correspond to the hands and feet of a person, which do all his activity. He should sprinkle the blood upon the altar, corresponding to the blood in his body. All these acts are performed in order that when they are done, a person should realize that he has sinned against his God with his body and his soul.[3]

When we read the korbanot section, we need to picture ourselves standing before the holy altar and feeling the emotions that we would have experienced as our animal is being offered before Hashem. By maintaining such vivid thoughts in our mind, it’s no wonder that our sins are forgiven. And it goes without saying, that having imagined our sacrifice being brought upon the altar, our approach to the day will also be vastly different than had we simply skipped over that section of davening.

Let’s try another non-Chasidic idea: The Torah states, “For all leaven and all honey you shall not sacrifice from it for a burnt offering for Hashem.”[4]  The Kli Yakar explains that the sweetness of honey represents physical pleasure. Leavened products, such as bread and cake, rise and they represent haughtiness.  Sometimes we’re motivated to serve God because it makes us feel good or high and mighty.  But that’s not the kind of offering He desires. We should be serving Heaven because Hashem has instructed us to keep His mitzvos, whether or not they feel good. That’s not easy to achieve. And so, it’s OK, says the Kli Yakar, to serve Hashem initially out of a sense of ‘what’s in it for me.’  Eventually, however, your goal should be to serve Hashem because He asked you to serve Him.  Otherwise, you’ll always end up taking the easy spiritual path in life and never take on any new divine challenges.

Why do most people struggle to find meaning in the Book of Vayikra? Because they read the verses and assume that the text should be instructive on a literal level. However, it’s only with the assistance of the Gemara and the commentaries throughout the ages, that we are able to appreciate that there was always a deeper significance to the sacrifices than meets the eye.

Paradoxically, very few people have issues slaughtering a cow, beating the hide into leather straps, creating black boxes, and then wrapping them around our arms and head. And yet, they struggle when they open up the section in the Torah that speaks of the relationship that we forge with God when we bring Him an animal gift. Why does one bother them while the other does not?

The only difference is that we do tefillin every day, while sacrifices feel so distant from our practical Judaism. But if we would take a few moments each day to ponder and learn about the meaning behind the sacrifices they would also stop feeling so strange to us. It should be abundantly clear to us that God does not need our sacrifices. Each detail of the service – now, as back then – is overflowing with life-transformational meaning and importance. Some of the meanings have been revealed to us through the wisdom of our Sages in the Talmud and beyond. And at the same time, we believe that certain elements of the sacrificial service remain hidden – along with the reasons underlying all the mitzvos that transcend our comprehension, from the kosher laws to circumcision, and everything in between.

That doesn’t stop us practicing those mitzvos. It doesn’t cause us to belittle or dismiss those mitzvos. We simply turn our eyes heavenward and thank our Father in Heaven for giving us the tools to serve Him in the very best way possible. The only difference between the sacrifices and other mitzvos is that it’s the sole mitzvah that we’re told that the mere recitation of the text achieves automatic atonement. Now that’s worth sacrificing your second cup of coffee for in the morning to get to shul on time!