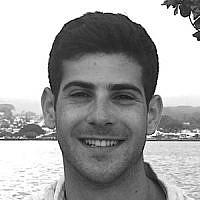 The Blogs
Roee Landesman
Apply for a Blog
Please note that the posts on The Blogs are contributed by third parties. The opinions, facts and any media content in them are presented solely by the authors, and neither The Times of Israel nor its partners assume any responsibility for them. Please contact us in case of abuse. In case of abuse,
Report this post.

How do you explain terror to a 3-year old and why he isn’t allowed to take the bus with Grandpa anymore? Now try explaining to him that his best friends unexpectedly packed up and left his town. These were questions that had put my parents in a tough and uncomfortable position, as they had to be answered, and with care. One of the earliest childhood memories that I share with my older sister (who went on to serve as an officer in the Israeli Defense Forces), is of my — incredibly brave — parents responding to the destruction around us by having us decorate the storage boxes of our gas masks with our favorite stickers. Quite understandably, they simplified the conflict and hid the truth from us — ignorance is bliss.

In the year 2000, during the deadly wave of Palestinian violence known as the second-intifada, I was an innocent toddler. While I was infatuated with Legos and automobiles in preschool, individuals were being stabbed in pizza parlors and entire buses were blown to pieces by suicide terrorists armed with homemade explosive belts. At home, my mom prepared salad for dinner while my father prepared the bomb shelter in case of a missile attack.

Meanwhile, the Israeli government was facing the exact same problem that had been forced onto my parents, but on a grander scale. The wave of terrorism, above all else, was meant to strike fear into the hearts of Israelis; and children were the most vulnerable targets.

A collective decision was made by artists, political officials, and psychologists to employ the same tactic my parents had decided to use. Over the course of many months, children’s shows and songs were bombarded with new content, which not only calmed Israeli children, but also took a step further to educate them about the situation through the lens of peace. I vividly recall hearing these songs, and until this day, there has been one that has stuck with me: Tnu Ligdol (Let us grow [in peace]) by Gidi Gov.

The song, which was originally written in 1985 but repeatedly broadcasted as part of this national campaign, is about two unlikely heroes– A carrot and a pea. As the two were sitting in a refrigerator one day, the light had gone out and so they began to get cold together. The chorus then introduces the main motif of this lyrical masterpiece: “Let us live in peace in our little village, where the sun will rise again, tomorrow again…Let us live in peace, without freezing from the cold”. As a timid 3-year old, the notion of peace was ironically forced into my entertainment, and therefore my early education.

Now let’s switch perspectives. While I was praying for peace during Shabbat and building magnificent Lego structures, Palestinian children — no more than 50 miles south of me — were exposed to an opposite reality. Popular shows broadcasted on the Gaza Strip’s national TV channel include propaganda pieces such as “Children’s Club” which features horrifying lessons. The children are encouraged to direct their anger towards Israelis through violence, and in one song children ranging from the ages of 4-10 are shown singing calls for ““Jihad! Holy war to the end against the Zionist enemy”. Quite different from the image of carrots yearning from peace.

Unfortunately, the Second Intifada was not an isolated case of Palestinian incitement. Through media, hate crimes, and a skewed education system, the fire of hatred in the Gaza Strip — and on the national TV channels of the Palestinian Authority — has been fueled ever since the territory was founded. Today, as parents tune into their favorite Gazan radio channels, popular hosts continue to spread violence-tuned media. In October of 2015, YouTube videos shared on popular social-media platforms such as Facebook and Instagram show “martrys” parading through Gaza city while singing “Stab the Zionist and say God is great”. In yet another example of incitement, a recent video was released showing small children in Hamas military uniforms putting on a play at their school in which they are shown harassing ultra-orthodox Jews with the butts of their toy rifles. New York Times contributor and current Minister of National Infrastructure, Energy, and Water resources Yuval Steinitz summarized the situation perfectly:

“Instead of being schooled in the ‘culture of peace,’ the next generation of Palestinians is being relentlessly fed a rhetorical diet that includes the idolization of terrorists, the demonization of Jews and the conviction that sooner or later Israel should cease to exist.”

The Israeli-Palestinian conflict is undoubtedly a complex and multi-faceted beast; It includes intense debates of history, culture, and law. However, there is another aspect of the conflict which is often overlooked, and that is ego; Why should a Palestinian family just “forget” about their home that was destroyed in 48,  and why should an Israeli family “forgive” the terrorists who murdered their child while on the bus to school. Because of decades of boiling hatred, violence and destruction, both sides have built themselves a coping mechanism in which they refuse to see the other side. There is no doubt that both sides of the conflict are ultimately driven to find peace, however, this anger has become embedded through generations of families and has blurred this quest.  And yet the key to breaking this vicious cycle is the same as any other; start with the future. Education, particularly in children’s early years, has the potential to be used positively as an incredibly powerful political tool. Rather than encouraging children to become martyrs and perpetrators of violence, inspire them to help others, attain a college degree, and become functioning members of society. It’s quite simple really: progress towards a lasting peace will happen when both sides begin to make a significant effort to educate the future generations to love and accept.

For decades, the Israeli populace and government have been making an active effort to reverse the damage done by educating its younger generations to live in harmony. If the Palestinian people are serious about a lasting peace, it’s time for them to step up to the plate and take ownership by properly educating their own. Begin to promote peace as a cornerstone of education in future generations, and peace will follow shortly; Real progress will only come when the carrot and pea can live together in harmony.

About the Author
Roee Landesman was born in Jerusalem, Israel and moved to Northern California at the age of 5. He attends Cal Poly- San Luis Obispo and is currently studying towards a bachelors degree in Computer Engineering. He is a passionate Israel Advocate that is proud to serve as a CAMERA fellow and the Vice President of Mustangs United For Israel.
Related Topics
Related Posts
Comments
Advertisement