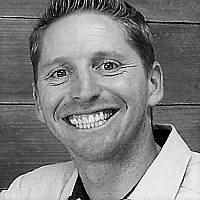 The Blogs
Jordan Fruchtman
Apply for a Blog
Please note that the posts on The Blogs are contributed by third parties. The opinions, facts and any media content in them are presented solely by the authors, and neither The Times of Israel nor its partners assume any responsibility for them. Please contact us in case of abuse. In case of abuse,
Report this post.

Anyone who says the month of January was easy is lying, or not paying attention. A usually predictable event — the peaceful succession of power from one president to the next — was anything but predictable as our country, still raw from the bitter election cycle of 2016, prepared for the giant question of “What comes next?”

As an organization with lots of politically and civically active participants, including many in the San Francisco Bay Area, Moishe House staff have been working every day to figure out how to best respond to and act on recent events. How do we support our residents as they try to process the turmoil around them and try to come out on the other side and how do we represent them when they themselves represent so many different voices?

In the Bay Area, these questions and efforts came to a crest at an art gallery in San Francisco on the night of January 20. Across the country, protesters marched and rallies were held, but at this event, entitled a “Unity Shabbat,” there were no protesters or marchers or shouting or fighting. There were 60 young adults from the five Bay Area Moishe Houses, the Federation’s YAD, the Shalom Hartman Institute and Reboot tackling critical social topics head-on through a Seder full of prayer, discussion, song and reflection.

And it was, by all accounts, amazing.

One participant said of the Seder, “The room was a powder keg of raw emotion. Instead of an explosion, Unity Shabbat was able to channel the present energy into a thoughtful conversation on how we stumbled into such divisive times and steps we can take to move forward.”

Rabbi Adina Allen, of the Jewish Studio Project, and Joel Stanley, Moishe House’s Senior Director of House Programs, facilitated the evening, while Moishe House residents and community partners led small-group discussions, addressing relevant quotes from Jewish and secular sources, and looking at themes such as working with divergent opinions and how to be effective allies with vulnerable groups.

Rabbi Allen spoke on the parshah, comparing current societal and communal roles to those of the midwives in Egypt, who acted with resilience to effect positive change. The evening ended with song and poetry, from “Olam Chesed Yibaneh” (“the world will be built with love”) to the lyrics of Leonard Cohen (“there is a crack in everything; that’s how the light gets in”) to “We Shall Overcome.”

Asher Kaye, a Moishe House resident in Palo Alto, said “The environment of the Shabbat table, gathering with the tranquility and comradery of the Day of Rest and messages on respectful disagreement, set the atmosphere for serious and engaging conversation.”

This evening wouldn’t have been possible without the Jim Joseph Foundation and the Charles and Lynn Schusterman Family Foundation, and we felt incredibly proud to be part of this group who made it possible for these young adults, these young leaders, to come together, support each other, and think about shared values and a deeper purpose.

The Unity Shabbat took place in January, yet it seems as if the fractures that appeared during the election and leading to the inauguration are deepening, rather than closing. If we could each act in the same manner as the young leaders at the Unity Shabbat — acting and speaking from a place of healing and a desire to reach common ground — I think we could find  that our ability to repair the things that divide us are just as strong as the things that seek to tear us apart.

About the Author
Jordan Fruchtman is the Chief Program Officer (CPO) of Moishe House, which has 95 houses in 22 countries and has engaged more than 43,000 post-college-age Jews in its first decade. He develops the global organization's program team and supports the house residents' community building efforts. Prior to Moishe House, Jordan served as the Executive Director of Hillel in Orange County, CA. He resides in the San Diego area.
Related Topics
Related Posts
Comments