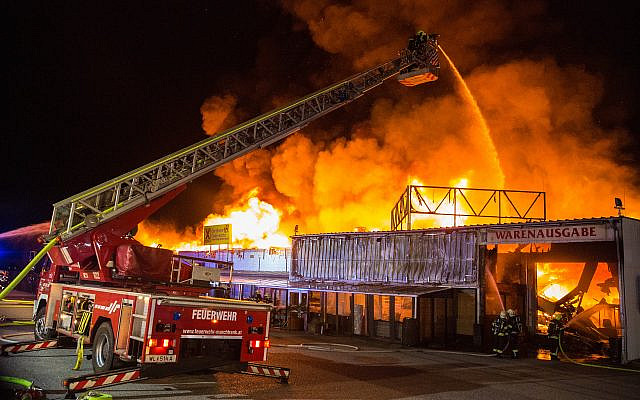 I had the privilege the other night to be at a vigil in the Bronx held opposite the building where the recent terrible tragedy occurred, the raging fire that claimed the lives of 19 souls, many of whom were children. What was remarkable that evening was how many of the speakers referenced God: “God is with us,” “God loves us,” “God loves the children.” Particularly striking were the words of the first speaker: “The Lord,” he said, “who showed the Children of Israel the way through the darkness with the pillar of fire, will show us through this darkness.” These words were shocking to hear: the tragedy itself had been a pillar of fire! Yet for this speaker, the image of fire, even at that moment, could serve to represent God’s presence. Yes, there was a terrible fire, yes, there is darkness. God, with God’s pillar of fire, will lead us and show us the way.

This made me realize how often these two things come together. How a sense of Divine abandonment can, at the same time, be intertwined with a hope and belief that God is ultimately there, God will show us the way.

So it was when B’nai Yisrael left Egypt. God led them – as the opening verses of the parsha tell us – in a roundabout way. Then, a few days later, God tells them to turn around and head back towards Egypt (Ex. 14:2). We can only imagine what they were thinking: “What is happening? We’re going back? Is God truly leading us to freedom?”

And what happens next? They turn around and see the Egyptians marching against them in full force. “Are there not enough graves in Egypt, that you brought us out here to die?!” (Ex. 14:1). “We thought we were free! This isn’t salvation! Is God handing us over to our oppressors?”

At that moment, with the Egyptians at their back and the uncrossable Red Sea in front of them, the people were pining for salvation, for a signal that God was with them. What did they then see? The angel and the cloud that traveled before the people to show them the way suddenly departed, moving from the front of the camp to behind it (Ex. 14:19). What was this if not a sign that God had stopped leading them and was abandoning them to their fate?

In fact, though, everything that looked like abandonment was ultimately part of the salvation. A roundabout path was necessary to prevent immediate engagement in a war. Turning back in the direction of Egypt was needed to lure the Egyptians to follow them.

So it was with the cloud. The cloud moving behind the people and standing between them and the Egyptians was what actually brought about the final salvation at the Red Sea. As Ramban notes, without the darkness of the cloud, the Egyptians would have had to have been insane to follow a people into a sea that their God had just split for them! But because of the cloud’s darkness that encloaked them, the Egyptians could see nothing. They moved forward, following the sound of the Israelite’s movement, only to look up when the cloud departed and suddenly realize that they were standing in the middle of a split sea! And then, still in shock and realization, the waters came crashing down on them, bringing about the salvation of the people.

None of this could have been known by B’nai Yisrael beforehand. Until this moment, the people were in abject despair: “Vayitzaku B’nai Yisrael, and the Children of Israel cried out to God” (Ex. 14:10). The verb here, tzeaka, calling out, does not mean prayer. It is rather a wailing of pain. At the beginning of the story of the exodus, the Torah tells us that the people moaned from the burden and oppression, “vayizaku, and they cried out” (Ex. 2:23). It was a tormented cry, tragic and void of any hope, that rose up to Heaven and led God to intervene. When the Egyptians were smote with the Plague of the Firstborn, they cried out with similar anguish. “And there was tzeaka gedola, a great wailing, in Egypt” (Ex. 12:30). Pure, undiluted, pain.

This time, however, it was different. Yes, there was tzeakah, wailing, despair, even a sense of abandonment and hopelessness. But there was something else as well. For they did not just wail: “Va’yitzaku B’nei Yisrael el Hashem.” They cried out to God. Intermingled with their hopelessness and sense of abandonment was hope and a belief that God had never left them. In their wailing, they strived to grasp on a trace of hope. God might be – God is – still there for us.

This is our challenge at times of despair. There may be times in our lives when we have suffered great loss, when we are feeling despair, when it seems that God is nowhere to be found. Our challenge at such times, amid all the signs that we see that might be telling us that God has abandoned us, is to strive to see the small flicker that shows us that God is still there. To believe that God will show us the way with the pillar of fire through this darkness.