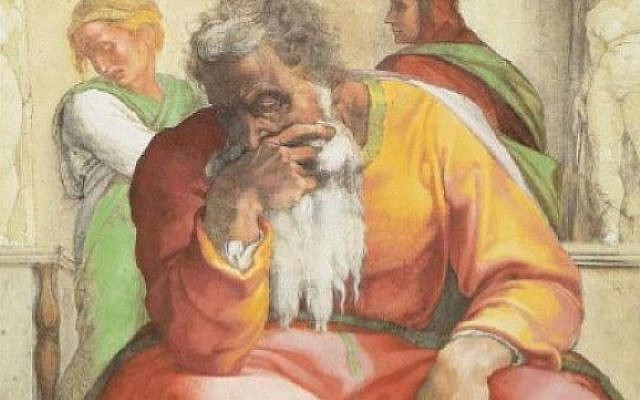 From 'The Prophet Jeremiah,' by Michelangelo.

There are good reasons why the rabbinic idea that senseless hatred caused the destruction of the Second Temple is the runaway favorite of most of the Tisha B’Av sermons, lectures, classes and articles you’ve ever come across. It makes sense historically, and it feels eternally relevant. It’s not hard to see how our in-fighting can bring us to the brink of self-destruction. It’s a fact of life that leads the headlines and fills our feeds.

But while all this is true, what we ignore at our peril are the reasons that the rabbis give for the First Temple’s destruction. Admittedly, they seem much less relevant or pressing: idol worship, bloodshed, forbidden sexual relations. A quick self-inspection confirms that I get a much better grade on not killing, not worshipping idols, and not engaging in forbidden sexual relations than I do on not hating other Jews, and I imagine most people share similar results. But when understood properly, in a national context, these three transgressions relate to the most central test of the Jewish people’s existence in Israel, and it is a test that, once again, we are failing.

When Isaiah criticizes idol worship, he speaks of how “their land is filled with idols, they worship the work of their own hands, that which their fingers have made” (Isaiah 2:8). The sin and error of idol worship is the claim that ultimate power, that the locus of control lies in our own hands, rather than beyond us. This conception makes power an end, rather than a means, and creates a world that is defined by the constant struggle for power, a world of the “be’alim,” a war of lords. The ultimate expressions of this struggle are to be found in sex (just ask Freud), and in bloodshed.

Since the abuse of power is the root of the evil criticized by the prophets, it should come as no surprise that their criticism is most often directed at those who hold the most power — the kings, the priests, and the leaders. Immediately preceding his description of the land filling with idols, Isaiah describes the relentless pursuit of power by the king. “And his land filled with gold and silver, and there is no limit to his treasures, and his land filled with horses, there is no limit to his chariots” (Isaiah 2:7). The verse echoes the restrictions on the king prescribed in Deuteronomy (17:14-20). From its very first formulation of the idea of a human king, the Torah demonstrated a keen awareness of the dangers of absolute power, and set strict limits on the king’s ability to amass power, wealth and women. Kings would have the extra “advantage” of trying to claim that their pursuit of power was not personal, but rather a matter of national interest, or even of national survival. This is precisely the failure of the test of power that the prophets constantly railed against, the notion that power is an end that can justify all means.

In a world in which the king will justify even immoral policies based on the political need for power, the same argument will be found at every level of society. From political leaders and religious officials who “hold fast to Torah” (Jeremiah 2:8), and down to the simple farmer who refuses to release his slaves or to refrain from work on the Sabbatical year or day — the need for power and control override what are meant to be higher religious and moral principles.

These are First Temple problems, and when we look around at our society, we can see them at every turn. The corruption investigations of countless politicians and religious leaders provide new examples daily. The recent, horrifying scandal relating to female prison guards being used to appease prisoners is but one example of how power as an end is used to justify committing sexual abuse. And, in my opinion, the most egregious failure of this test of power that exacts the most awful toll in terms of human suffering- the ongoing horror of Israeli weapons sales to murderous regimes, justified in the name of Israeli security, diplomatic, and economic interests.

During the First Temple, disunity was not the problem that most concerned the prophets, even though it was acute, and unity was not the solution. They were concerned with the challenges that come with sovereignty and prosperity, and in our 75th year of renewed sovereignty, in times of unprecedented prosperity, we need to start paying more attention to them. Tisha B’Av is the perfect time to start.

About the Author
Avidan Freedman is one of the founders of Yanshoof (www.yanshoof.org), an organization dedicated to stopping Israeli arms sales to human rights violators, and an educator at the Shalom Hartman Institute's high school and post-high school programs. He lives in Efrat with his wife Devorah and their 5 children.
Related Topics
Related Posts