The Blogs
Frimet Roth
Apply for a Blog
Advertisement
Please note that the posts on The Blogs are contributed by third parties. The opinions, facts and any media content in them are presented solely by the authors, and neither The Times of Israel nor its partners assume any responsibility for them. Please contact us in case of abuse. In case of abuse,
Report this post.
Once again, Jordan’s King Abdullah II has cast his spell on yet another world leader. Whether it is his glibness, the impressive English, his seamless melding of East and West, it really hardly matters. He always gets what he is after.

Last week it was Israel’s Foreign Minister Yair Lapid who met with him. The public was told that the encounter was intended to reduce the likelihood of violence during the impending holiday season.

It was the second meeting the two had since the new Israeli government was formed last June. And since Jordan deigned to publicize this one – after keeping the first a secret – it was hailed by Israel’s media as a great success.

“We agreed that we must work together to calm tensions and promote understanding, particularly in the lead-up to the month of Ramadan and Passover,” Lapid said in a statement after the meeting at the Al Husseiniya Palace. “Our special relationship with the Kingdom of Jordan ensures a better future for our children, and the peace between us isn’t just good neighborliness but is also our moral responsibility to both our peoples.”

Mr. Lapid, I am both heartbroken and infuriated by your meeting last week with Jordan’s ruler. If moral responsibility is really your concern, why did you not mention to your “good neighbor” his immoral conduct towards my child’s murderer?

Why did you, and do you, consistently ignore how this leader with whom you boast of a “special relationship” refuses to abide by the kingdom’s extradition treaty with the US?

That he steadfastly rejects the U.S. demand to extradite the self-confessed mass-murderer who is one of the 25 most wanted terrorists in the world?

Our child’s blood, along with that of the fourteen other innocent victims of Tamimi’s treacherous attack on Israeli soil cries out for justice.

But you, Mr. Lapid, see fit to sing kumbaya with the one man who can hand Tamimi into the hands of the U.S. Department of Justice.

Five years ago today, on my birthday as it happens, officials of that same arm of the U.S. government met with my husband and me along with the parents of another U.S. citizen murdered by Tamimi to disclose that criminal charges against her were about to be unsealed.

They came to share this with us before the public announcement at a press conference scheduled for several hours later. I shed tears of relief then in the naive belief that the move signaled an end to Tamimi’s years of frolic since she was freed in the Shalit Deal five and a half years earlier: an end to Tamimi’s celebration of murder and to her incitement of others to emulate what she did.

The conduct of leaders both in the U.S. and Israel since that day has taught me that my belief in their sense of “moral responsibility”, to quote Mr. Lapid, was entirely unfounded. Realpolitik and personal advancement are what motivate them.

And so, my dear Malki, I am sorry but one more year has passed with your murderer still free, still protected, still unrestrained. 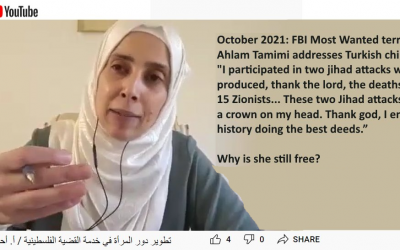 Sbarro bomber Ahlam Tamimi continues to incite terror under Jordanian protection [Image: Frimet and Arnold Roth’s blog, This Ongoing War]
About the Author
A Jerusalem-based freelance writer, law graduate and commentator on the challenges facing people with special needs, Frimet Roth together with her husband Arnold co-founded The Malki Foundation (www.kerenmalki.org) in 2001. It provides concrete support for Israeli families of all faiths who care at home for a special-needs child. The Roths' daughter Malki was murdered at the age of 15 in the terrorist bombing of the Sbarro pizzeria. Her personal blog, under the title "The Good, The Bad, The Ugly", is at http://frimetgbu.blogspot.com The views expressed here are personal.
Related Topics
Related Posts
Comments