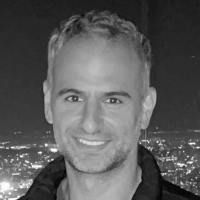 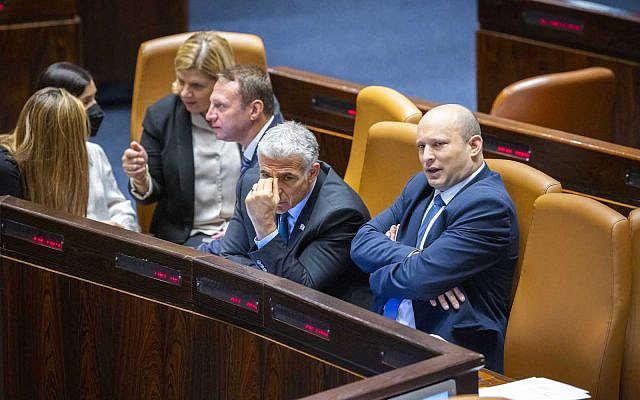 A discussion and a vote on a bill to dissolve the Knesset, at the assembly hall of the Israeli parliament, in Jerusalem, on June 30, 2022. (Olivier Fitoussi/Flash90)

Once again, Israelis will head to the polls this fall with no guarantee that its political deadlock will be resolved. Culminating years of political dysfunction, Israel is poised to swear in its third prime minister in just over a year as its coalition spanning the political and religious spectrum dissolves itself. While outgoing Prime Minister Naftali Bennett’s government certainly achieved a certain level of success by passing a budget for the first time in three years, signing a free trade agreement with the UAE, deterring Hamas from attacking Israel’s border with Gaza, and discreetly lobbying the U.S. administration to prevent the renewal of the JCPOA without triggering a diplomatic crisis with the American president, among other successes, its razor thin majority in the Knesset left far too much power in the hands of any one MK.

Although the recent wave of elections has been a referendum on whether Benjamin Netanyahu should be prime minister, Israel’s political crisis goes beyond Netanyahu’s fitness to serve as prime minister. The Israeli political structure has gradually gone from an electorate that chooses between two large parties or one of several small niche parties to an electorate that must decide between any number of personalities all vying for as much as they can get. The slow transition from voting for a party representing an ideology that happens to be led by an individual to voting for an individual who happens to lead a party has exposed a significant flaw in the Israeli political system.

Furthermore, this problem will only be exacerbated once Netanyahu leaves the political arena. Netanyahu might be Israel’s most hated politician, but he’s also its most popular. His Likud party consistently polls as Israel’s largest party by far and it took eight parties with widely differing ideologies to scrape together 61 MKs to unseat him. However, a Netanyahu-less Likud party can be expected to receive far fewer seats in the Knesset than it currently has which will leave the entire Knesset with an array of small and mid-sized parties fighting over the premiership potentially making the coalition-building process even less clear cut than it currently is. To establish a governing coalition that keeps all its members happy in the future, governments may have to rotate prime ministers on an annual basis and are likely to be paralyzed either by the polarization of the ideological spectrum of parties in the coalition or the ambitions of the parties’ respective leaders which will significantly diminish any such government’s ability to govern.

As it stands, a governing coalition must emerge from the legislature and must retain its support for the duration of its term. This means that in addition to running the country, every government as well as the opposition must consider petty politics and alliances which often puts politics before country. If the executive branch cannot keep its legislative supporters happy (as is usually the case at some point in every government), the government cannot function and eventually falls. This allows political parties to promise their voters the world and then blame coalition politics for breaking their promises. Doing away with the need for a coalition will create a legislative landscape more conducive to advancing the agenda that sent the legislators to the Knesset instead of focusing on placating political allies and targeting political foes.

Additionally, this would free up more time for the prime minister and the rest of the cabinet to focus on running the country instead of playing politics. It’s considered perfectly normal for a prime minister to go from a meeting with the president of the United States or the “Pit” (Israel’s version of the Situation Room) to a meeting with local politicians to calm a storm that could cause unwanted waves in the coalition or keep the party’s base from a political mutiny. At best, the system in place promotes dysfunction and, at worst, it cannot function at all.

Therefore, the only real way to prevent an endless electoral crisis and maintain a stable, functioning government is for Israel to drastically change the way it elects its leaders. Israel must separate its legislative branch of government from its executive branch and elect its prime minister separately from the Knesset. A popularly elected prime minister would appoint his or her own ministers based on their suitability for the position instead of their politics and the cabinet could be capped at 18 ministers once the need for an ever-expanding cabinet necessary to please the numerous MKs fighting over cabinet posts is obviated. Like cabinet secretaries in the U.S., ministers would need to be confirmed by the Knesset, but once confirmed, the prime minister, the cabinet and the Knesset would serve for four years free from the political constraints brought about by coalition politics.

Because the prime minister will no longer need the ongoing support of the Knesset, electoral representation can be maximized by reducing the electoral threshold to entering the Knesset from four seats (3.25% of the vote) to even a single seat (0.83%). With coalition politics out of the way, Knesset members will be freer to focus on legislating the interests of their respective voters. While a measure of political horse-trading can certainly be expected in such a scenario, the absence of the need to support or oppose a coalition purely on political grounds will no longer be an obstacle to much-needed legislation. This would put an end to the absurd situation in which right-wing parties in the opposition oppose renewing laws such as the Citizenship Law (preventing Palestinian spouses of Israelis from gaining Israeli citizenship) and imposing Israeli law in the Israeli settlements (laws that have much of their support from the Israeli Right) while left-wing parties and even some Arab MKs support or abstain from voting on these laws merely because they are members of the coalition.

An environment in which politicians vote against the interests of their constituents just to “stick it” to the other side is not a good recipe for progress. The outgoing Knesset’s inability to renew the Citizenship Law, renew the law imposing Israeli law in Israeli settlements in the West Bank, raise the minimum wage, pass the Metro Law (expediting construction of an underground metro system in the Tel Aviv area), and come to an agreement on legislation necessary to become part of the U.S. visa waiver program does not help the voters whose representatives are opposing these measures just to spite the other side. What is telling, however, is that despite all these failures, the coalition and opposition did manage to come to an agreement to increase public funding for their upcoming election campaigns.

From 1996-2001 Israel tinkered with its electoral process. In 1996, 1999 and 2001, Israel directly elected its prime minister separately from the Knesset. However, this experiment was doomed from the onset because it still required the prime minister to maintain a coalition of 61 MKs supporting its government. Moreover, because Israelis were free to elect the prime minister of their choice and a party most ideologically aligned with their politics, Israel had more smaller parties all of whom had to be managed and mollified by a prime minister struggling to keep his coalition afloat. By completely separating the legislative branch from the executive branch, this problem is precluded. This will also allow for the orderly transfer of power between administrations which is something sorely lacking in Israel’s current system in which a coalition is immediately sworn in upon formation.

Another benefit of such a separation is a larger measure of checks and balances on each branch of government. Separating the power of the legislative branch from the executive branch will also allow for a more orderly reform of Israel’s judicial branch. The judiciary has long been criticized by the Israeli Right, who currently represent a majority of the electorate, for being a mouthpiece for Israel’s liberal, secular, Ashkenazi elite and shutting out what is now a majority of Israelis. While reforms to the judicial selection process in 2008 have led to a more ideologically diverse supreme court, many on the right still criticize the selection process by the nine-member judicial selection committee as not being representative enough of the Israeli people. Recently, a law was proposed by which the government would nominate a Supreme Court member and the Knesset would confirm it. However, in the current makeup, where there is no separation between the legislative branch and the executive branch, the governing coalition almost always has enough MKs to simply rubberstamp any nomination made by the government leaving no room for inter government checks and balances on the proposed judicial selection process. Fully separating the legislative branch from the executive branch would allow for such a reform, and such a change could go a long way towards legitimizing the Supreme Court’s exercise of judicial review of legislation in the eyes of the voters.

Also, such a reform would also allow Israel to combine the offices of the Prime Minister with that of the President. The president’s most important job of its largely ceremonial post is to charge an MK with the position of forming a government at the conclusion of an election cycle. Changing the electoral system would eliminate the need for this role. The Israeli government would save billions of shekels in unnecessary salaries, security costs, campaigns, and elections by obviating the need for a coalition, limiting the number of cabinet posts to 18 ministers, and eliminating the office of the President.

Finally, even before 2019, governments had a habit of changing the rules of the political game to benefit the players on the team in charge or to target a potential political threat. Like the ever-expanding cabinet, these “personal laws” have been largely proposed for political considerations. The game has become less about the people and more about the players. Changing the electoral system must also set forth clear rules limiting the ability of politicians in office to change the rules merely for their own benefit. Every effort must be made to create less of an incentive for legislation motivated by politics and more for legislation fueled by the needs of the country.

So long as Israel doesn’t change its system of government, this crisis will only worsen regardless of whether Netanyahu is in the picture. Restructuring the government will lead to more stability, a Knesset that can focus more on legislating the interests of their voters instead of political considerations, and an executive branch that can operate more professionally instead of politically. Making these requisite changes to Israel’s Basic Laws is essential to Israel’s political stability and its future. Hopefully, those with the power to make this change will put Israel’s national interests ahead of politics and work towards making the changes needed to better Israel’s political stability.

About the Author
Born and raised in Chicago. Lived in Israel and worked as a foreign law clerk for the deputy Chief Justice of the Supreme Court of Israel. Now an attorney based in Chicago and New York.
Related Topics
Related Posts