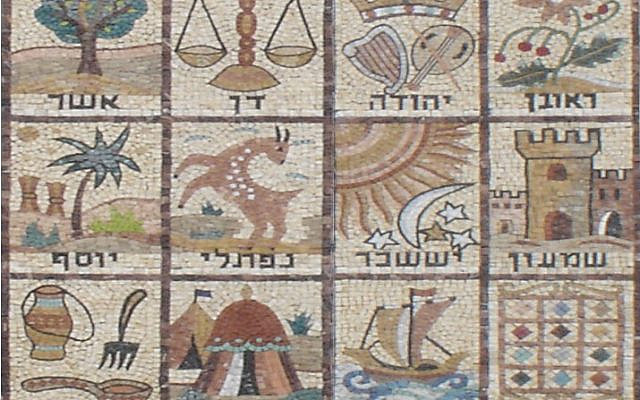 Illustrative. A mosaic of the flags of the tribes of ancient Israel. (The Blog of the National Library of Israel, (https://blog.nli.org.il/en/lost_ten_tribes/)

Is burning the national flag legal? How does one reconcile the principle of freedom of speech with national loyalty and patriotism? In Israel, the “law of the flag” makes it illegal to defame the flag in any way with a penalty of up to one year imprisonment or a fine. That is because of what the flag represents: national identity, statute, loyalty, independence, and uniqueness.  What rousing pride Jews felt when first seeing the picture of the Israeli flag billowing over the Kotel in Jerusalem’s Old City.

Parshat Bamidbar describes the formation of the Israelite nation in the desert, with each tribe having its own unique flag with distinct colors and symbols. The tribes were organized into a square, with three tribes forming a unit on each side. Besides the individual flag, each grouping had its own banner. These units encircled the Mishkan, the Tabernacle, which was positioned in the center.

This arrangement provided an identity value for each tribe, and also helped organize the movements of such a large multitude in the desert. The flags’ colors and symbols reflected each tribe’s diverse nature and its unique responsibility in the world. It allowed those who were lost to find their place both physically and spiritually. Rabbi Shmuel David Luzzatto, Shadal, points out that this orderly process also prevented the fleeing nation from appearing as a loose band of disorganized, runaway slaves.

The grouping of Judah was joined by Issachar and Zevulun and camped in the east. Their flag contained a picture of a lion, for that was the image attributed to Judah by Jacob.

The unit of Reuben, joined by Simeon and Gad, were in the south-their flag featured a figure of a man, symbolizing the deeper meaning of the “duda’im,” the mandrake flowers brought by Reuben to his mother Leah, and the roots of which were human-shaped.

Ephraim, with Menashe and Benjamin, were in the west. His flag bore the image of an ox, since he was the “eldest of an ox,” the ox being the representation attributed to his father Joseph, by his own father, Jacob.

The group of Dan, with Asher and Naphtali, camped in the north. Dan’s flag was decorated with the image of an eagle. Thus, the four camps surrounding the Mishkan were represented by the figures of a lion, a man, an ox and an eagle.

The prophet Ezekiel experienced a prophetic vision of the Divine chariot. Ezekiel’s detailed description of the divine chariot included four animals with four faces, “wheels” beneath them and a firmament above. The heavenly throne was positioned above the firmament. He describes the chariot as being carried by four figures: a lion, a man, an ox and an eagle.

The corollary between the flags and the faces of the creatures in the chariot of God is so complete that the Ibn Ezra views the camp of God as a divine chariot. The desert encampment represents the spiritual chariot in heaven that also has four faces. The four-flag configuration of the Jewish camp symbolizes the divine throne to which God drew near.

The Jewish people made two other unsuccessful attempts to anthropomorphically create the divine throne, beckoning God’s presence. At the sin of the golden calf, an ox was formed — not to take the place of God, but to serve as a chariot to host God’s immanence. The prophet describes the idolatrous Jeroboam as having built two oxen for the Jews to worship. The Jews were fully aware that the ox is part of God’s chariot and Yerovam merely widened the space between them.

The Midrash describes that it was actually the Israelites who requested this camp formation of God when they witnessed the revelation at Sinai. At Sinai, the Jews saw angels bearing flags encamped around the heavenly throne. When God saw that the Jewish people desired to have a similar formation for their own camp, He instituted a system which corresponded to the ministering angels camped around the divine chariot using the same images of man, lion, ox and eagle. The formation of the angels into “camps” is apparently a reference to the celestial beings encircling the four “faces” of the divine chariot that the Jews observed at Sinai.

The four images represent nature as we are exposed to it, the lion represents wild animals; the ox, the domesticated ones; the eagle, the bird kingdom; and man, the pinnacle of all life forms. As Rambam points out, it is through the contemplation of God’s creation that man can develop a relationship with God that facilitates imbibing the world with God’s presence. The “chariot” of God symbolizes mobility, and Ezekiel actually sees God’s presence on the move. The “Divine Chariot of God,” then, is a metaphor for that vehicle which expresses God’s glory and power to mankind.

The Israelites asked of God to permit them to mimic the angels and expressed their desire to be His messengers and standard bearers in the world. He commands them to encamp with the flags and then acquiesces to the Israeli nation’s request to become the humankind’s conduit for God’s immanence.

When we read this week’s Torah portion and encounter the detailed description of the Jews’ encampment it may seem to be superfluous. One might think that the flags were nothing more than a symbol of national pride and identity. It is then fitting to consider the question as to the propriety of a nation permitting the destruction of the very item which reflects its own values. The courts need to determine how to balance democratic principles and nationalism.

On further inspection what emerges from this week’s Torah reading however, is well beyond a narrow legal dilemma. It represents an eternal message that underscores the deep desire of the Jewish nation to comprehend what our broader mission is about and implement these values into a world that is moving forward at a dizzying pace. Today, on Yom Yerushalayim, when we pay tribute to God for having returned the exiled nation to the Jewish state with a Jewish government whose seat is located in the ancient capital city of Jerusalem, we are reminded that the special task Jews are charged with can best be accomplished when the Jewish nation is sovereign in its own land.