In honor of the controversial protests against the rule of Binyamin Netanyahu, here is to the memory of a more peaceful protest that took place all over the country in the summer of 2011: 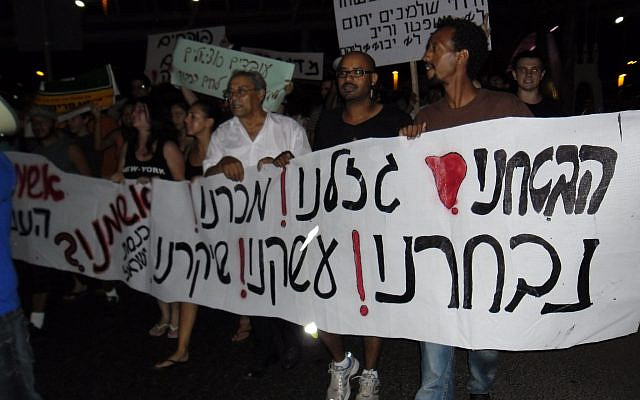 “Israel is not for the rich only,” said Efrat, 30, Saturday night in Petah Tikva.

A month into the widespread student-led demonstrations demanding social justice in Israel, the spotlight this week of the now traditional Saturday night protest was on the country’s periphery. With Haifa and Beersheva as epicenters, activists abandoned Tel Aviv and Jerusalem and moved the struggle to other cities, including Afula, Beit She’an, Dimona, Eilat, Hod Hasharon, Modi’in, Netanya, Petah Tikva and Ramat Hasharon, with a combined reported 70,000 in attendance.

“We want better education. We are not looking for money, we are looking for justice,” said Irit,32, who marched alongside Efrat. “People work all day and still have no financial security.” 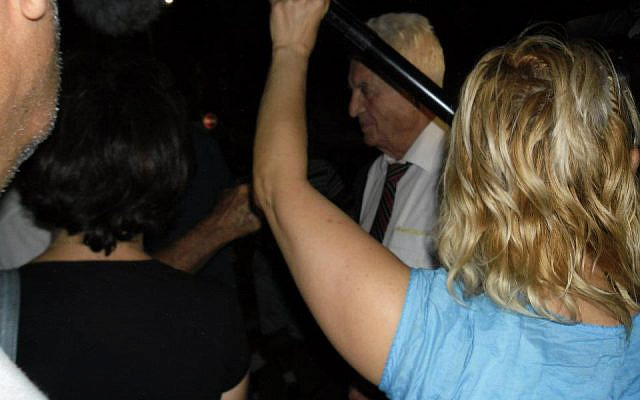 The protest’s organizers, decked out in yellow sequence shirts and megaphones, led the mob in a march snaking through central Petah Tikva, culminating at a stage set up in a park near the city’s main shopping district, next to the Calatrava Bridge which connects Petah Tikva to the haredi city of Bnei Brak.

“We are creating a revolution. Israel is 63 years old. All this time [the government] is taking our money. We can’t afford our rent. We want to buy a house, but it is impossible in Israel,” said Ornit 36. “We went to the army, we served our country and the government spits on us. There is no help with health and education. The country is wealthy; the people are poor.”

Whereas the tent cities in Tel Aviv, Haifa and Jerusalem are mainly about lowering housing costs, namely for students, the protests in the periphery are fueled by social injustices ranging from local, to larger national issues. In Petah Tikva, protesters demonstrated against schools refusing to enroll Ethiopians children and the price of taxes on fuel and electricity in the country. Wage increases for doctors and social workers, and better benefits for Holocaust survivors were also demanded.

The main grievances from students, however, were housing prices and average salary rates. Itay Einav, 30, an education major at the Open University, said his part time job pays a monthly NIS 500. Since his salary doesn’t cover the expense of his apartment, he cannot even think of buying a car. Likewise, Mor Zorsky a 26-year old student at Ridman College, said she has no help from the government to assist with moving into an apartment and out of her parent’s house.

However, 28-year-old student Tzion Sofer from the Academic College of Jaffa, was more concerned about national workers’ rights. “I quit my job. I worked for a multinational corporation that trades on the international stock market. I tried to create a workers union, but no one took it seriously. People have no rights. Now [the company] is laying off 50% of their workers, because of the stock market.”

As the crowd marched from the city center to the stage, the mob chanted, “Bibi boker tov, Petah Tikva barehov” (good morning Bibi, Petah Tikva is in the street). Echoing the statements of many there, said Omri, “Why must we work with no end?” 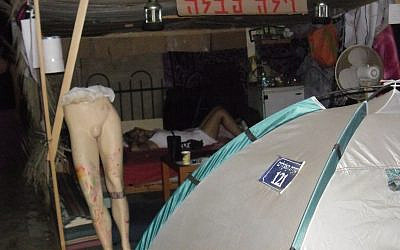 An old man in a blue shirt approaches a young woman stirring two pots of food. “How much does it cost?” he asks.
“It’s free and will be ready in ten minutes,” she answers.
Nicole has been volunteering by cooking spicy shakshuka for the past week in Tel Aviv’s now legendary tent city. Pointing to the man who owns the makeshift kitchen, she says, “I met Yaron and was very excited about what he’s doing here. I am very happy to cook for everyone.”
Yaron, an economics student, first pitched a tent on Rothschild on July 17 and has spent every night since, only returning home to prepare more food for the masses. 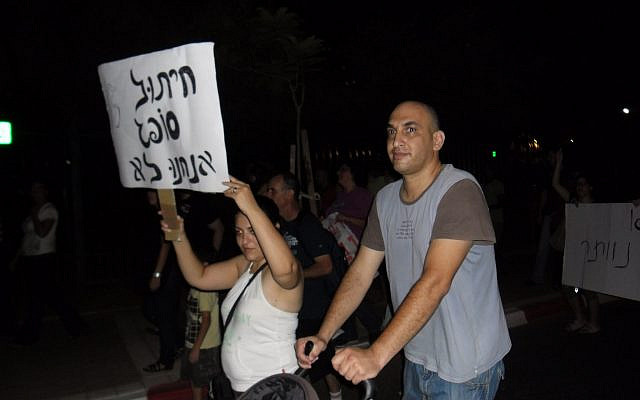 More than a month since students began setting up camp along Rothschild Boulevard, the street is still lined with tents, carpets and mattresses, and its trees are festooned with signs proclaiming protesters’ various demands for social justice and reform from the Israeli democracy.

Among the multi-faceted demonstrations in tent city are protesters who seek rights for divorced fathers, for Palestinians in East Jerusalem, for Beduins in the Negev, social workers, doctors, and, most central to the protest, are against the high cost of living.

A parade of bicyclists chant “tsu me hamerpeset ha medina koeset” (get down from your balconies, the nation is angry), suggesting frustration among Israel’s middle with a perceived concentration of wealth and power in the higher classes, lowering the quality of life for the majority of Israel’s citizens.

Lior, who works as a graphic designer at the daily newspaper Haaretz, voices additional consensus concerns. “Civil rights are not just about material things. Social justice means peace and equality.

“I think the whole social justice thing is not just about economics. Everything is related: the military budget is too large, we should be working on peace. Solving our security issues deducts from the budget of doctors, teachers and the lower classes.”

Though perhaps currently overshadowed by the massive protests against the high cost of living, medical students and doctors have been protesting and striking since early April. Now they too are found at tent city. One of their main complaints is that although both medicine and psychology are two of the hardest academic programs in the country, there is real incentive to study these fields since the starting salaries are nowhere near competitive.

Eyal, a 33-year-old physician-in-training says he and his colleagues have protesting for a month about the public healthcare system. “We work for shifts that last for 24 hours, sometimes 30.

“My last shift started at 9 am on Saturday,” he says with an exhausted look in his face. “I came home at 1 pm on Sunday, and now I am here protesting.”
“We are raising awareness about what it is like to be a doctor here in Israel. Salary is just an example of a situation where the medical industry is on the decline. An intern works between six and 12 shifts per month, of more than 24 hours each.”
He says that more than 1000 medical interns have handed in their letters of resignation because working in these conditions is impossible. “In three weeks, more than 1300 interns will resign their jobs. I already got my letter approved,” he says proudly.

“We [doctors] don’t want to get rich, we just want to create a proper situation in which we can give the best medical care to our patient while trying to maintain somewhat normal lives.”

“Right now,” she continues, “the waiting list is so long that children are not getting the diagnoses they need and are forced to seek outside help, which costs thousands of shekels.”

Oded Meshulam, 39, was among those protesting the government’s treatment of divorced parents. He explained that “divorce laws in Israel are discriminatory and give full child custody to the mother. While forcing her to be the caretaker, at the same time, the father is forced to be the children’s financial caretaker.”
Meshulam is joined by MK Yulia Shamalov-Berkovich, also fighting for rights for divorced parents. “We are fighting for equality at the time of divorce and open discussions regarding the future of the children,” says Meshulam.

The tent city, though, is not entirely made of responsible Samaritans like Nicole and Yaron, or idealists like those representing the doctors’ strike and Meshulam. Etay is a disillusioned 26-year-old who pitched his tent and has kept it in place since July 26. “I have always lived outside the system,” he says. “The army was a waste of time. I don’t believe in the system, so why should I be a part of it.”

Other individuals not part of any movement come to the tent city to express their singular concerns or show support.

As the sun begins to set, Doctor Awad from the village of Araqit in the Negev lectures on the Israeli government’s failure to recognize Beduin villages in the South, which are considered illegal and routinely demolished by order of the Interior Ministry. These villages often have no water, no roads or electricity, explains Awad, and are not connected to any infrastructure. Now, he claims, the government is trying to build a forest over his village.

And Noga, a 14-year-old high school student, is with two friends spending the night in a tent. When asked what she was protesting she says, “This is my fourth time spending the night at the tent city. I just come to support the movement.”

Food smells waft throughout the compound. In yet another corner, Doctor Shwarma, a delicious staple in Jaffa, has also set up a kitchen with volunteers working frantically to feed a long line of demonstrators armed with plastic forks and plates. Nearby stands a special “celebrity” visitor: millionaire and former MK Shmuel Flatto Sharon, who’s made a cameo appearance in an apparent show of solidarity with the movement. (He seems, however, to be getting heckled by a few diners at Doctor Shwarma’s free kitchen.)

Elsewhere, Ido Tadmor, the famous Israeli dancer and choreographer, is spotted speaking to an impressive crowd about the importance of demanding rights for Israel’s artists, stating there’s no money to develop Israel’s artistic culture.

While the tent city revolution echoes a sentiment of disenfranchisement among young Israelis, the fact remains that democracy is far from dead.

From behind a pot of onions, peppers and tomatoes, volunteer chef Nicole, and the now ready shakshuka says she is hopeful about the current Likud government.
“They are going to listen. Bibi will listen. He is responsive. He will make changes.”

This article is based on two articles I wrote. I edited them and then posted to my WordPress blog.

About the Author
Scott Krane has been blogging for TOI since 2012. His writing has also appeared in The Atlantic, Tablet, Ha'aretz, The Jerusalem Post and the Daily Caller, among others. He has a degree in Judaic Studies and a Master's in English from Bar-Ilan University. He has learned at Macon Ha'Gavuah L'Torah in Israel and Hadar Ha'Torah Rabbinical Seminary in Brooklyn.
Related Topics
Related Posts
Comments