The Blogs
Mordechai Soskil
Apply for a Blog
Advertisement
Please note that the posts on The Blogs are contributed by third parties. The opinions, facts and any media content in them are presented solely by the authors, and neither The Times of Israel nor its partners assume any responsibility for them. Please contact us in case of abuse. In case of abuse,
Report this post.

This week’s Dvar Torah is PG13. I tried to find a way to make it G-rated but it didn’t work. So please accept that any of the risqué parts are neither tawdry nor gratuitous.

If you were going to look for the Torah’s view on sex you might think of exploring the stories of the creation of Adam and Chava. You might explore the loving relationships between Yaakov and Rachel or David and Michal. You might not think to look at the building of the mishkan for insight into the most intimate part of the human experience. But there it is – there is sex in the mishkan. (Ok, that was a little gratuitous.)

After all the metals and textiles needed to build the mishkan are collected and the vessels and architecture are being constructed the Torah adds that the “kiyor” was made out of the women’s copper mirrors. (The kiyor was a type of large urn that sat on a base. It was filled with water and used by the Kohanim to wash their hands and feet in a ceremonial/preparatory way before beginning the service.) What was special about these mirrors that required they be noted by themselves? [If you’re curious, the mirrors probably looked something like this, but were highly polished and new.] 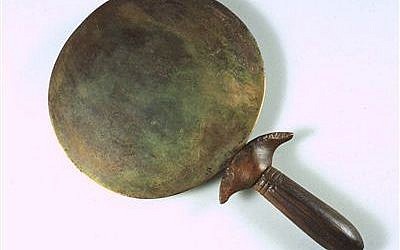 Rashi’s (Rabbi Shlomo Yitzchaki 1040-1105) comment here is widely known. He relates the midrash which says that these mirrors were precious to Hashem. In Egypt the men would come home from their labor exhausted and depleted. They had neither the psychological fortitude nor the physical desire to engage in the most intimate aspects of married life. The holy women of yesteryear would take these mirrors and use them to play a flirtatious game. In the words of the midrash they would sit next to their husbands and tease them saying, “I’m more beautiful than you are.” In that way the men would have revival of the spirit and the flesh and in that loving way our people grew.

The Ibn Ezra (Avraham ibn Ezra 1089-1167) has an almost opposite thought. There were a group of women in the desert who sought only spiritual lives. They would gather at Moshe’s tent to pray and to hear words of Torah. They thought only of growing the power of their souls and their connection to G-d. They swore off decadent things like self-beautification and physical pleasure. They willingly gifted these mirrors to the mishkan project because they were no longer needed. They are objects of the shallow pursuits, of vanity, and they no longer desired all of that.

I’ve had an evolution of how I think about these topics.

In the olden times I would have suggested that Rashi and Ibn Ezra weren’t having just a textual debate, they were having a philosophical debate. I would have suggested that according to Ibn Ezra the path to holiness is a path of withdrawing from physical pleasure. Overcoming physical desire and living an ascetic life is a core value in living a G-d like life. Whereas Rashi would argue that an even more refined level is to channel the natural desires for indulgence in a way that serves a higher goal. For Rashi, the flirtation, the temptation, the physical desire for intimacy, is not something to be avoided. In fact, the women went out of their way to stoke the fires latent inside their broken husbands. Desire was something they brought out not something they overcame. The holiness came from their intent and what was in their heart, not avoiding the pleasures of the body.

It’s not a bad thought. I just think it’s an immature thought. I think 25 years of married life has taught me something more profound.

What if Rashi and Ibn Ezra essentially agree? Maybe Rashi can agree with Ibn Ezra that to overcome physical desire is holy. But Rashi might add that overcoming physical desire is not the whole job of a human being. Because in a marriage the emotional intimacy between husband and wife might be an even loftier goal. I think maybe those holy women in Egypt knew something that their husbands didn’t. (Big shock there.) Maybe their husbands had had the physical desire for sex beaten out of them; they were exhausted and uninterested. But those wives knew that sex is not just about the act of physical intimacy, it’s about the emotional intimacy which flows from vulnerability and mutual care that the act creates. And from that emotional closeness comes all the things a family needs; respect, care, empathy, and most importantly shalom bayis. Creating that is even holier than just overcoming desire. Although it’s definitely not the simple reading of the midrash Rashi is quoting, it’s not too big a stretch to say that the real accomplishment of these women and their mirrors is not that they conceived children. It’s that that they had the wisdom to deepen the intimate life of husband and wife, and from that radiated out the ambiance that sustained healthy family life, even in the most difficult times.

Though our lives in 21st century America are different in so many ways than those of our ancestors in Egypt, there are many things that are the same. The sanctity of our family life is in a perilous situation. The need for healthy physical intimacy and emotional intimacy in our marriages is critical. And our wives understand things that we don’t.

About the Author
Rabbi Mordechai Soskil has been teaching Torah for more than 20 years. Currently he is the Director of Judaic Studies at Beth Tfiloh Dahan Community School. He is also the author of a highly regarded book on faith and hashkafa titled "Questions Obnoxious Jewish Teenagers Ask." He and his wife Allison have 6 children that range from Awesome to Fantastic. And now four precious granddaughters.
Related Topics
Related Posts
Comments