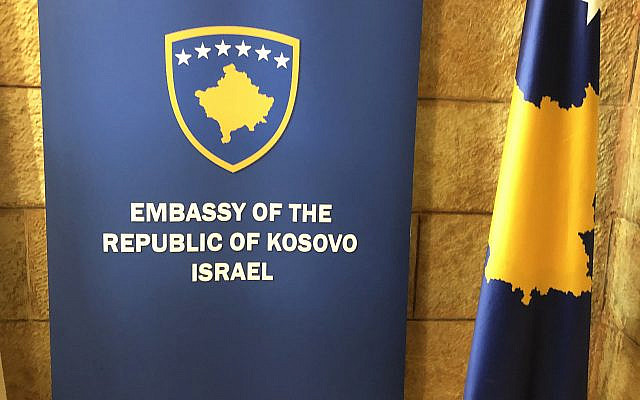 Embassy of the Republic of Kosovo in Israel, February 2022. Photo by Carrie Hart

Thursday, February 17, 2022, marked the first time in history that the Embassy of Kosovo in Jerusalem hosted an evening celebration of Kosovo’s 14th year of independence.

This occasion also marked the first year of full diplomatic relations between Israel and Kosovo, which occurred on February 1, 2021. That ceremony, a first of its kind on Zoom, happened during the global COVID outbreak, when officials from both governments could not meet in person.

However, this past Thursday’s independence anniversary celebration took place on-location, with a good turnout of Israelis and Kosovars crowded into the new embassy office space in downtown Jerusalem. Ines Demiri, Charge d’Affaires of Kosovo, expressed her heart during the special ceremony. “On this 14th anniversary, we remember and celebrate, not only the day of the birth of our state, but we are also honoring all of those who made this day possible. All the generations and relevant domestic and international actors, who contributed to bringing the vision and the struggle for a free and independent Kosovo.”

Demiri also thanked the U.S. leadership who created the opportunity for this historic achievement.

Remembering the background of what happened, it was the Trump Administration that introduced a series of letters in September 2020 directed toward Kosovo and Serbia. Reportedly, Israel was not, initially, part of that agreement. Soon after, the Israeli government was invited to participate.

The part of the agreement between Israel and Kosovo has been implemented, with Israel accepting the state of Kosovo, and Kosovo establishing an embassy in Jerusalem.

Demiri talked about Kosovo being a story of a war-torn society that was transformed into a country, with a growing economy. She claimed that the people of Kosovo have never forgotten what the State of Israel did in sheltering Kosovo refugees during the war of 1999.

Kosovo’s location is in the heart of the Balkans, and Demiri declared that it has easy access to a market of almost 30 million people in the region. Kosovo enjoys a young and mostly multi-lingual work force.

Demiri noted that Kosovo has experienced major international achievements in diverse areas: sports, music, the film industry, as well as information and communications technologies, with a dynamic Start-Up field. Proudly, Demiri pointed out that the Republic of Kosovo has won three gold medals at the Olympic games.

Kosovo aims to work closely with Israel in all areas of cooperation including agriculture, water management, education, health care, community development, business entrepreneurships, and in many other capacities, according to Demiri.

Kosovo has a mixed record on the Holocaust, with some heroic rescues of Jews, but, also, stories of those in Kosovo that sided with the Nazis during WWII. While some Kosovo families helped Jews escape Nazi persecution, and are recognized as Righteous Among the Nations by Yad Vashem, there are many tragedies that took place, as well.

Demiri pointed out that Kosovo has recognized the Jews that were deported to concentration camps. She mentioned a memorial plaque in the exact place where the last synagogue stood in Pristina, with a clear message that Kosovo will never forget the Jews that perished.

A new synagogue and cultural center are being built in Kosovo’s historic city of Prizren, within the small Jewish community there. It is being supported by Kosovo’s Minister of Culture.

At the embassy event on Thursday night, Israel’s Minister of Religious Affairs, Matan Kahane, talked about the good relations with Kosovo that began long before Israel recognized the nation’s independence. He also mentioned how Israel supplied significant medical aid during the war of 1999, at which time Israel set up field hospitals, and, subsequently, helped the population in the years following.

Kahane noted that Israel has appreciated the efforts made by Kosovo to promote issues of importance to Israel, such as working towards finding a just solution to the problem of confiscated Jewish property during the Holocaust. He also brought up a promise that Kosovo, as well as Serbia, made to Israel in the past. “We hope that the law declaring Hezbollah as a terrorist organization, which Kosovo has committed itself too, will soon be legislated.”

Within the last two months, Tamar Ziv was appointed by Israel as the first Ambassador to Kosovo. In her future visit to Kosovo, she will be presenting her credentials to the president.

In an interview with this writer, Ziv commented on the new ties between Israel and Kosovo, including a planned meeting of both foreign ministers in Israel in 2022. “This is really the time and circumstances to fill the relations with a lot of content. We are looking at high level visits from both sides — ministers that will be arriving from Kosovo to Israel; and, hopefully, Israeli ministers that will be visiting Kosovo. We hope to sign a few agreements between the countries and identify the fields and sectors that are of mutual interest.”

In November 2021, a large business delegation from Kosovo visited Israel and was the guest of Israel’s Chambers of Commerce. The organization is dedicated to a free market economy, and has become instrumental in forging commercial ties that pave the way for diplomatic relations.

According to Ziv, “I was informed that it was a very successful delegation; a lot of mutual interests in each other’s economies. One of the first things I would like to do is to bring a delegation of Israeli businessmen to Kosovo to get to know the country and discover fields for cooperation.”

Several years ago, a company called Enlight began a successful project in Kosovo for wind energy. This is the first and biggest Israeli investment in Kosovo. Ziv talked about other possible collaborations. “I have been approached by a few Israeli companies that have had previous contacts in Kosovo and are eager to work there; to do business there. There is a lot of potential in a few fields. For example, agriculture, food security, climate change, energy, medicine, health, etc. These would be fields I would want to work on, to see if these are appropriate for mutual cooperation,” she said.

Ziv also stated that Kosovo is a fertile land and 50% of it is good for agriculture, which is a very strong sector in Kosovo. “It makes up about 10% of the GDP. Israel is world renown for agriculture and agriculture innovation. I think we can find common ground there.”

Young people in Kosovo are well-educated. The country has computer specialists, and Ziv said that the field of innovation could be interesting for mutual cooperation. Israel’s dynamic high-tech industry might be of great interest to Kosovo’s younger population, as well.

In principle Kosovo agreed to have a module of Holocaust education inserted into the school curriculum for certain grades. Israel will be discussing the content with Kosovo. “We are working now with the Kosovars on this program, and we hope that maybe next year it will be ready for implementation in the school system,” Ziv commented.

She also talked about tourism between Israel and Kosovo. While there are not direct flights, she said, “I think that Kosovo could be a tourist destination for Israelis and vice versa.” Within her first year, as ambassador, one of Ziv’s goals is to create tourism links between the two countries.

At the embassy event, Matan Kahane also spoke of the future potential of travel between these two nations. He explained, “We need to know one another, our history, and our cultures. I am convinced that next year when we assemble, once again, to celebrate the national day for Kosovo, we will have a long list of accomplishments to be proud of, that will reflect a year of successful and joint cooperation.”

Ines Demiri ended her speech at the Kosovo embassy independence celebration speaking about the genuine friendship between the people of Israel and the people of Kosovo, especially the people-to-people connections. She reached out to Israelis with these words: “Come to Kosovo to discover the beauty of the people and the landscape. Kosovo is blessed to have friends like you.”