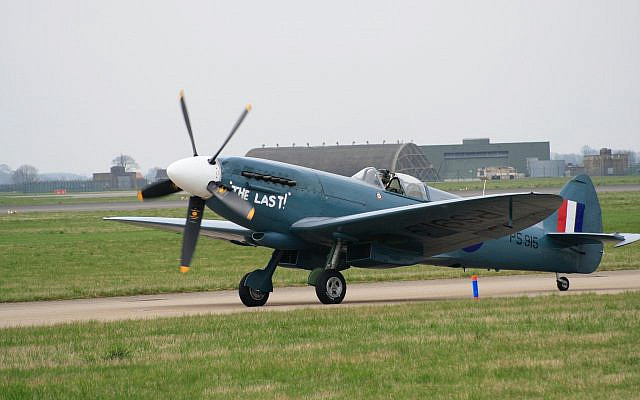 A WWII Spitfire - on its way to a boneyard? (Free to Use Photo by Paul Rowland)

Recent newspaper reports have claimed that Israel has flown in Lebanese airspace over 22,000 times in last 15 years. A few moments with a calculator would suggest that there are some four overflights every day.

A dozen articles in scientific journals detail the acute physiological effects of the noise caused by aircraft, including hypertension and sleep disturbance.

We, in Rehovot, find ourselves not too distant from a major air force base. While not the largest air force base in the world – that privilege goes to Eglin Air Force Base, in Florida, with more than 700 acres (nearly 3,000 dunam) – Tel Nof occupies a lot of Israel’s meagre countryside.

We would be happy to have only four overflights a day. On an ordinary day, we have many overflights by F-15 and F-16 fighters. These aircraft are not known for their obedience to noise regulations. On occasions, when a possible enemy incursion has been spotted, we are bombarded by the sonic booms as the aircraft break the sound barrier in their haste to catch the incoming invader.

From time to time, the air force holds a three-day (and night) exercise. No-one gives much thought to our hypertension or disturbed sleep.

Problems with our unruly neighbours are not new; Google “tension in North Israel” to find many reports of rocket fire and border crossings over the last ten or more years.
Of course, Lebanon has an easy remedy for the problem. They could reclaim their country from the Hezbollah terrorist group who are working to increase their rocket and missile arsenal. But, for the time being, with Iran in the background, Israel must continue to keep a watchful eye on its northern neighbour. Our disturbed sleep is a small price to pay for the safety and security provided by our fearless young pilots.

The USA has a number of aircraft boneyards. The Mojave Air and Space Port in California is a good example. With a very large area and dry desert conditions, it is used to store large Boeing, Airbus, Lockheed, and McDonnell-Douglas aircraft of several major airlines. While a few aircraft have been temporarily taken off flying status and must be stored in an environment that will properly preserve them, most will not fly again and are kept for spare parts.

We look forward to a time when Israel will have a huge boneyard, somewhere in the Negev, and the air force will only need a couple of aircraft for use in ceremonial fly-pasts on Yom Ha’Atzmaut.

(And if you were wondering, some 240 Spitfires are known to exist. Around 60 are still airworthy.)