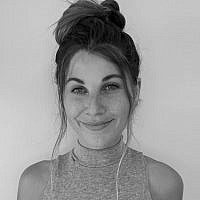 The Blogs
Yaffa Abadi
Writer, painter, philosophy debator
Apply for a Blog
Advertisement
Please note that the posts on The Blogs are contributed by third parties. The opinions, facts and any media content in them are presented solely by the authors, and neither The Times of Israel nor its partners assume any responsibility for them. Please contact us in case of abuse. In case of abuse,
Report this post.

The term used to roll off my tong with a certain feeling of intimidation, weariness, and a bit of distaste.

Yes, technically speaking I have been an Israeli myself for approximately 14 months (I have the teuda to prove it). But I’m talking about real Israelis. The ones who grew up rough and tough. The ones who spoke back to their teachers, ran around barefoot, played sheshbesh at the dinner table and spit out words like קל, רצח and כאילו at least once a sentence.

It was these Israelis I was hesitant of.

It started way back in primary school with my very first Hebrew teacher, ‘Morah Tsiporah’. A strapping old woman with bushy hair and drawn on eyebrows that were not once even in size. She was both the most loving and petrifying woman I knew. She could go from hugging you for writing your aleph correctly, to nearly biting your head off for a simple mispronunciation.

From there on out my contact with my supposed sisters and brothers reared from the holy land filled me with trepidation. All the way to my Aliyah assistant at the Israel offices who I’m pretty sure decided my Aliyah date for me.  Even after I had converted myself to one of the tribe, barriers remained. From bus driver to bank assistant, I had yet to ‘catch’ their unique personality of the Israeli sabra.

That was until my recent trip to India (cue sarcastic comments), a trip where I not only found myself, but found a new appreciation of clean water, electricity, usable toilets and Israelis.

I was warned, ‘India is mini Israel’ they told me. But I didn’t realize quite the extent. On that trail of Hummus and all things yum, every Indian shop owner speaks a decent Hebrew, Chabad bochurs drive through the streets with their payot flowing in the wind, and you’re more likely to come across a falafel in the market than Indian thali.

But it was when I was sitting on the floor in a classic Indian restaurant that it begun. Sharing a joint, a bowl of ice cream and a real conversation with Doron and Tamir, I started to reconsider, reevaluate and understand this darker side of my family.  It went upwards from there. Travelling in packs of five or so Israelis at a time became the norm.  And so it happened that in this bizarre countries miles away from Israel, I started to love Israelis.

The way they have the most generous hearts. I never, not once, sat in a group without being offered every part of every meal. It’s like there is an unspoken agreement of what’s mine is yours. My Malawach is your Malawach and your chai tea is my chai tea, no questions asked. Their open palms astounded me and I felt myself, too, expanding my usually selfish nature and considering others more than ever before.

The way they are always so eager to help. Yes, this can translate into opinions on just about everything. But it comes out of the simple will to assist. There was not one moment of need that me and my travelling buddy Shaina (who is the best human in the world- shout out to you) felt alone. Whether we couldn’t get tickets for a bus, whether the guesthouse was overbooked, or even when we were stuck on what to order. Bus seats were offered, rooms were shared, and seven different dishes were shoved in our faces to help us decide.

The way they appreciate the fact that I have made Aliyah. Even the ones who think I’m crazy. Probably half the time people discovered I made Aliyah on my own the reaction was a shade of the following
‘מה, את משוגעת?! לעזוב את המשפחה ולגור בפח כזה כשאין כסף, אין ממשלה טובה ואין היזדמנויות??”
loosely translated as…you’re crazy girl.

And yet, after learning that fact, I was always treated with a kind of admiration, spoken to in Hebrew that I could understand and invited to meal upon meal when I return back home.

So it was that after a month of trekking in the heat and rain of Northern India, of thirteen-hour horror bus rides and bed sheets covered in bugs, of living off crisps and chocolate for hours and hours at a time, that Shaina and I established a חברה of sorts. Our hearts had opened to the swarms of Israelis with their straight forwards statements and their genuine care. And although I ached as we walked out of the plane and into the Ben Gurion airport, mourning the end of the best trip of my life, I smiled at every Israeli I passed. Even the ones that shoved past me in the line, and relished in my new appreciation for my Israeli tribe.

About the Author
Yaffa Abadi is a Tel Aviv-based writer and dreamer who recently completed her B.A. in philosophy and literature. She is now a content manager at F2 Venture Capital and a creative writer in her free time. Born and raised in South Africa, and still going through the long process of integrating into Israeli society (and loving most of the journey.)
Related Topics
Related Posts
Comments