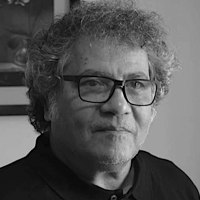 The Blogs
Kamal Abdel-Malek
Apply for a Blog
Please note that the posts on The Blogs are contributed by third parties. The opinions, facts and any media content in them are presented solely by the authors, and neither The Times of Israel nor its partners assume any responsibility for them. Please contact us in case of abuse. In case of abuse,
Report this post.

Egypt’s disastrous defeat in the 1967 war with Israel was the shock of my generation. I was fifteen at the time and the war broke out during our school exams. I was living in Alexandria with my parents, my sister and my older brother, his wife and their children. The family, with the exception of my brother and myself, decided to move for the duration of the war to Biyala, our village in the Nile Delta.

The country was gripped with war hysteria. Ahmed Said of Cairo Radio’s “Voice of the Arabs” hurled threats of annihilation at the enemy. “Bushra ya ‘arab, (Good news O Arabs!),” he would shout, “the day has come; let us erase Israel from the map!”

One military communiqué after another followed, claiming massive losses on the enemy’s side, jets downed – twenty, forty and in no time the number of Israeli jets blown out of the sky reached 83! The owner of a falafel restaurant in our neighborhood closed his shop and put up a sign that said he would open a new restaurant in Tel Aviv.

My brother, who was a French teacher, and I decided to participate in the war efforts. The high school I attended and where my brother taught opened a training center for civilian volunteers. We would go to the school building every day, register the volunteers and arrange for their light military training. Egyptians from all walks of life came, peasants in their jalabiyas who could not write their names, effendis in their western-style suits, students, teachers, everybody.

The guns the volunteers were trained to use were much outdated, some from the World War II era and even before. Some could hold no more than five bullets and had to be cocked after each bullet was fired. But there was patriotic enthusiasm among the people, innocent, perhaps even naive. It was a misplaced enthusiasm.

The country’s rulers had deceived the people into believing that the army could overrun Israel and thus restore Palestine to the Palestinians. When an Israeli reconnaissance plane flew high in the sky over the training center, a naive volunteer cocked his outdated gun, thinking he could shoot down the supersonic jet with a gun better used for hunting.

The shocking news came just four days after the war began. We had lost the war! Twenty thousand Egyptians were killed, about 80% of our army’s weapons were destroyed, including almost all our air force. Sinai fell to the enemy. To top off the pain and humiliation, Abdel-Nasser declared on June 9, in a shaky voice, that he had decided to resign.

I was with my brother at the training center when Abdel-Nasser’s resignation speech was broadcast on the radio. Our eyes bulged in disbelief. After a few minutes, when the tragic news sank in, some of us burst into tears. It seemed to us we were losing Egypt and its leader. My brother wondered in despair: Who will rule Egypt now if the great leader is to surrender?

Immediately after the resignation speech, crowds of Egyptians poured into the streets demanding that the leader stay on, which, after a few hours of suspense, he did. Our leader, the clever rais, had fooled the kind-hearted Egyptians and gotten away unscathed.

The burden of defeat

It took the people eight or nine months to rise up against the corrupt leadership that had brought upon them a disaster of frightening proportions. The students, supported by some workers, took to the streets. There were riots and sit-ins in several places. Students took over university buildings and barricaded themselves against the police. The feared and revered figure of Abdel-Nasser was seriously challenged.

The defeat was a personal humiliation for every Egyptian. How did we manage to live with such shame? We withdrew inside ourselves living off handouts from the same “reactionary” monarchies, such as the Saudi royal family, that our leaders had viciously attacked in the past.

Then we turned against ourselves. There emerged a wave of ridicule and jokes against the army. Soldiers were sneered at in public places. Making jokes became our way of coping with the disaster. It is an art for which we are notorious. Over centuries of foreign rule, we brandished the jokes as a weapon against our oppressors. But this time we aimed the weapon against ourselves. One of the jokes at the time was about somebody who wore army boots and found himself running backward; another about the Egyptian tanks, which had ten gears, one forward and nine in reverse.

The burden of the defeat weighed very heavily on us. We craved anything that might retrieve our pride or raise our morale. That explained the sudden, and brief, jubilation when our navy, only a few months after the defeat, managed to sink the Eilat, an Israeli destroyer. I remember that I wrote an article on the subject and went to read it over the loudspeaker in front of my high school mates before saluting the flag, as we used to do every morning.

In 1969, I saw in Alexandria an exhibition of photographs from the Six-Day War, photographs of civilians burned by napalm, killed soldiers, charred tanks and armored cars. I felt sick to my stomach. When I left the exhibition, I was terribly shaken. I vowed to myself that I’d do anything possible to help remove the shame of our defeat and restore the pride of our people.

In 1971, I was a student at the University of Alexandria, majoring in English literature. Sadat was now in power and he promised 1971 would be the “year of decision.” Like most of my mates, I did not think much of Sadat. A spate of jokes about him swept the country. He was depicted as inept, petty, numbskull, colonel yes-yes, Nasser’s poodle…etc. I, too, took part in the public ridicule of the president. I remember that I wrote a poem in colloquial Egyptian Arabic satirizing Sadat. I used to pass it surreptitiously from one student to the other. The beginning went like this:

The rest was a parody of Sadat’s speeches to the people. His speeches were tiresome and monotonous as he was fond of giving petty details. (In a formal speech to the nation, Sadat made a point of mentioning that when Henry Kissinger came to see him in his home in Cairo he offered him something to drink and it was, the president took care to mention, cold lemonade.) The poem, of course, exaggerated such qualities and made Sadat give such details as in which drawer he kept his famous pipe and on which shelf of his wardrobe he kept his underwear briefs. 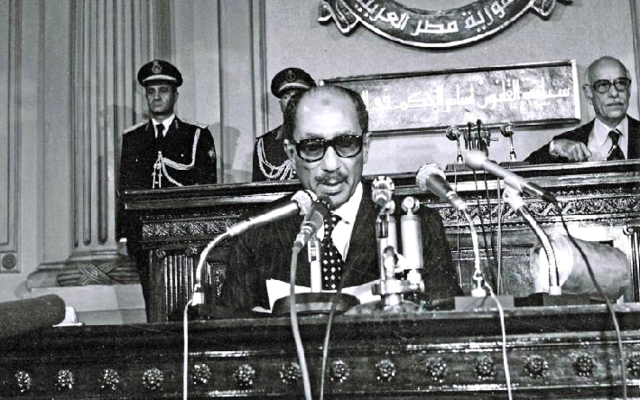 My classmates loved the poem. As a literary creation my poem was totally worthless; it nevertheless genuinely depicted the mistrust young Egyptians, like myself, had in their political leadership and its policy of breaking promises to the nation. When I read the poem to my mother, however, she had nothing good to say about it. In fact, she rebuked me, saying I should not ridicule the president of the country who was as old – and thus as worthy of respect – as my own father.

As it later transpired, Sadat was not all that inept or good-for-nothing. The breaking of his promise that 1971 would be the year of decision – either war or peace – turned out to be part of his whole camouflage strategy. It made the October War of 1973 a total surprise, even for us Egyptians.

Excerpted from the author’s unpublished memoirs, “Israel and I: An Egyptian Academic Tells His Story.”

About the Author
Raised in Alexandria, Egypt, and educated in Montreal, Kamal Abdel-Malek is a professor of Arabic literature, researcher, and translator who has taught at Princeton and Brown universities. How people from different cultural backgrounds relate to one another without losing their authentic selves is what preoccupies Abdel-Malek’s scholarly and fictional work alike, which include: ”America in an Arab Mirror: Images of America in Arabic Travel Literature, 1688 to 9/11 and Beyond” (2011), ”The Rhetoric of Violence: Arab-Jewish Encounters in Contemporary Palestinian Literature and Film” (2005), a prelude to his fictional work, ”Come with Me from Jerusalem” (2013). Prof. Abdel-Malek is also a member of the Egyptian Union of Writers and the Union of Emirati Writers. He is currently the Chief Editor of the ”Arabic and World Literature”, a scholarly e-journal published by the London-based Andromeda Academic Services. His recent research focuses on literature as a vehicle for world peace.
Related Topics
Related Posts
Comments