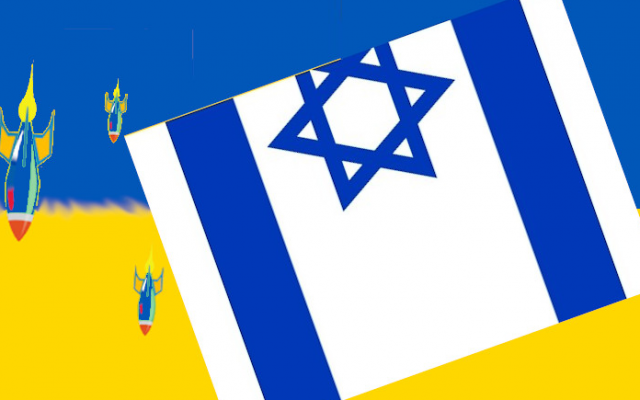 Up until now, Israel has refused to send Iron Dome systems to Ukraine. Of course, the diplomatic excuse has not been about refusal, but about the good Israel could do playing the role of mediator. Any delusions that that is a real possibility have been dashed long before now. Much more significantly, after this latest fury of missiles that Russia has rained down upon civilians, what is clear is how many lives would have already been saved if Israel had lived up to its moral duty as a nation.

Russia is pursuing policies that put it directly on the road to genocide. There is no “middle ground”. Even before the surge in missile attacks, Ukraine Pres. Zelenskyy decried Israel’s failure to step up. If that were not enough, the deadly Russian rain of missiles (and reign of death) continues to cause spikes in food prices around the world, and will begin to cause starvation in various regions, because it impedes and degrades Ukraine’s ability to send its tremendously important grain exports to the wider world.

This time of Sukkot is when we pray for rain and for blessings of sustenance to be showered upon the Earth and upon all nations. It is a time when we imagine ourselves acting as priests on behalf of peace and well-being for all humanity. What do those prayers even mean when Israel stands by, allowing this rain of death when  it could do so much to stop it. It is not even a matter of being a “light to the nations”. Is Israel even going to be among the averagely-good nations? Will Israel continue its complicity — for complicity is what it is becoming — in Russia’s acts of large-scale murder?

Our prayers start to seem meaningless when such actions by the state that represents the Jewish people are wonting. Let’s pray for the war against Ukraine to end, and for autocracy in Russia and everywhere to fall, and let’s ask every MK and political player in Israel to do something to get Iron Dome in the hands of Ukraine, and thereby move the needle towards defending all humanity.

(For a prayer about defeating tyranny and supporting freedom and democracy, based on birkat haminim, go to: https://neohasid.org/resources/democracy/

English translation of the prayer: May You tear out autocracy, tyranny and despotism, ruin those who cheat and deceive, and upend those who oppress the vulnerable. Make the reign of the arrogant disappear from all lands. May the people attacking democracies everywhere stumble and fail, and may their plans be as nought. Stop them, humble them, bring on their downfall, soon, in our days.

May You give to all peoples the strength and will to pursue righteousness and seek peace as a unified force, so that violence be uprooted, and healing, good life and peace may flourish.)

About the Author
Rabbi David Mevorach Seidenberg is the creator of neohasid.org, author of Kabbalah and Ecology (Cambridge U. Press, 2015), and a scholar of Jewish thought. David is also the Shmita scholar-in-residence at Abundance Farm in Northampton MA. He teaches around the world and also leads astronomy programs. As a liturgist, David is well-known for pieces like the prayer for voting and an acclaimed English translation of Eikhah ("Laments"). David also teaches nigunim and is a composer of Jewish music and an avid dancer.
Related Topics
Related Posts