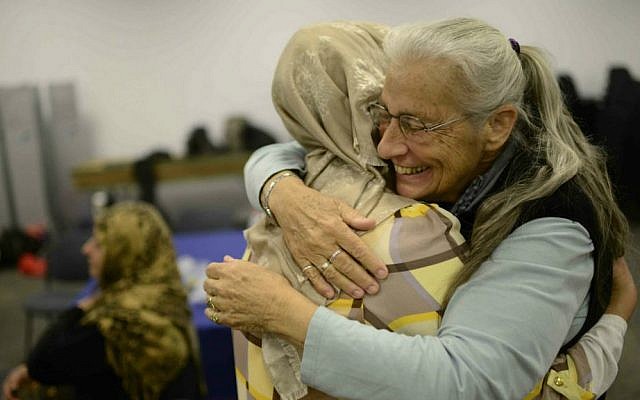 Palestinians and Israelis attend a joint ceremony for families of Israeli and Palestinian victims on Memorial Day organized by "Combatants for Peace" and the "Israeli-Palestinian Bereaved Families for Peace" in Tel Aviv, April 21, 2015. (Tomer Neuberg/Flash90)

Much of the discourse around the Israeli-Palestinian conflict is about numbers. One state, two states, and various calculations of the exact numbers of Jews and Arabs living between the Mediterranean Sea and the Jordan River. At their joint press conference, Prime Minister Netanyahu declared that numbers are mere labels. President Trump posited that numbers (possibly like facts) do not matter to him.

After pooh-poohing numbers as mere labels, Netanyahu went on to disclose that not all numbers should be labeled as labels. One or two (as in states) are labels. But the number two – as in Israel’s conditions for negotiations – is not a label, but rather an enumeration of essential substance. The two requirements are Palestinian leadership and society’s acceptance of the legitimacy of the Jewish state, and Israel’s maintenance of military control between the Mediterranean and the Jordan River. The number two, therefore, has paramount significance, as the sufficient and necessary conditions for Israeli-Palestinian discourse. The absence of either would leave Israel exposed to ongoing attack and potential danger.

Logically, Netanyahu is correct. If the only numbers that matter are Israel’s two conditions, one state or two states is inconsequential. We can have military control whether in a one- or two-state solution, and Palestinian recognition of the legitimacy of the Jewish state is equally necessary under both options. In fact, under the one-state option, this recognition is even more critical, for how else could they be assimilated in one form or another as full or partial citizens under the Jewish state?

When all that is guiding the political vision of Israel is the fulfillment of these two conditions, then one or two states are indeed labels with no consequential substance. There are, however, other numbers which are far from labels. These are the numbers of Jews and Arabs representing the real, actual people residing between the Sea and the River. Within the current sovereign State of Israel and the settlements in Judea and Samaria, the real numbers are approximately 6.75 million Jews and 1.75 million Arabs.

When it comes to Gaza and the West Bank, however, the numbers again become symbolic and dependent on one’s political outlook. According to the Palestinian Central Bureau of Statistics, there are some 1.9 million Palestinians living in Gaza, and 2.9 million in the West Bank. Because Israel has relinquished its military control over Gaza, it no longer counts. When it comes to the West Bank or Judea and Samaria, however, the numbers one or two (states) cease to be labels and in fact shape one’s math. If one is committed to a one-state solution for Israel, the number of Palestinians in the West Bank is diminished by up to 1 million, while two-state supporters within Israel have counting skills similar to the Palestinians’.

Let’s now do the math. For one-state supporters, the numbers are as follows: 1.75 million Israeli Arabs + 1.9 million West Bank Arabs = 3.65 million. 6.75 million Jews – 3.65 million Arabs = 3.1 million more Jews. Therefore, Israel can annex the West Bank, grant Israeli citizenship to all Palestinians, and still maintain its Jewish majority. As for Gaza, who cares about Gaza? It’s not our problem.

When numbers are labels and / or do not matter, we are free to posit whatever number suits our political ideology or feeds our fears. Because numbers actually do matter, it is of paramount significance for official Israel to count carefully and put forth figures that transcend our political divides. I am certain that in Start-Up Nation, we can find somebody capable of providing all of us with an accurate accounting.

There is, however, another number, which like Netanyahu’s two, is not a label. It is actually the more complete number of Israel’s conditions for negotiations and a settlement with the Palestinians. It is the number three. One and two are as stipulated by Netanyahu. There is almost no one within the Zionist Israeli camp who is not committed to both. The reality of living in the Middle East make them self-evident. What they exactly mean, however, and how each is to be implemented, is neither self-evident nor simple.

The problem with Netanyahu’s math is that he seems to be able to count only up to two. I believe there is a third: “What is hateful unto you, do not do unto others. That is the whole Torah, and the rest is but commentary.” A Jewish state is not merely a reflection of numbers, but of the Jewish values which we stand for and by. If this is indeed the “whole Torah,” we are obligated to include it as one of our conditions, for without it, the Jewishness of Israel is in danger.

The practical implications of number three, like the first two, are not self-evident and clear. But I believe it implies the following: If Palestinians must accept the legitimacy of the Jewish state, it seems self-evident that Israel must reciprocate in kind. This is not a concession to Palestinians, but a commitment to the core teaching of our tradition.

The second implication is that we must count Gaza in our negotiations. While many Gazans are far from being our favorite people, they too are created in the image of God and must be given the chance to reap the benefits of an Israeli-Palestinian accord. As Jews we are taught to love the stranger as ourselves, for we were strangers in the Land of Egypt, which means not merely to treat others as we would want to be treated, but to learn from our past pain and degradation, and commit to eradicating it wherever we can. Who cares about Gaza? We ought to.

So let’s return to the New Math in the Middle East. One or two? Does it matter? It depends on your number three.

About the Author
Rabbi Dr. Donniel Hartman is the president of the Shalom Hartman Institute and the author of 'Putting God Second: How to Save Religion' from Itself. Together with Yossi Klein Halevi and Elana Stein Hain, he co-hosts the 'For Heaven’s Sake' podcast. Donniel is the founder of some of the most extensive education, training and enrichment programs for scholars, educators, rabbis, and religious and lay leaders in Israel and North America. He is a prominent essayist, blogger and lecturer on issues of Israeli politics, policy, Judaism, and the Jewish community. He has a PhD in Jewish philosophy from Hebrew University, an MA in political philosophy from New York University, an MA in religion from Temple University, and rabbinic ordination from the Shalom Hartman Institute.
Related Topics
Related Posts
Comments