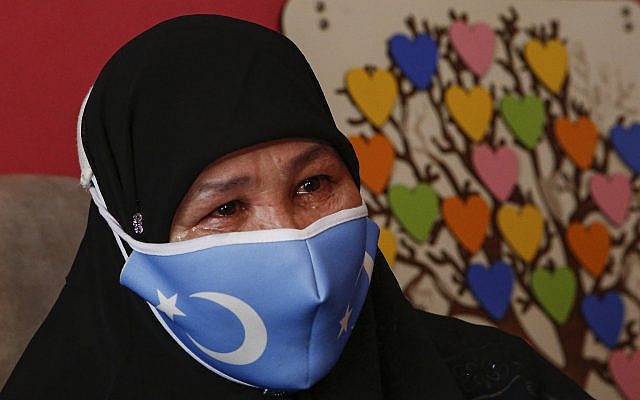 Bumeryem Rozi, 55, an ethnic Uyghur who fled from China to Turkey, cries as she talks at her home, in Istanbul, Tuesday, June 1, 2021. Rozi, a mother of four, is one of three Uyghurs who described forced abortions and torture by Chinese authorities in China's far western Xinjiang region, ahead of giving testimony to a people's tribunal in London, which is investigating if Beijing's actions against the Uyghur ethnic group amount to genocide. Rozi, said authorities in Xinjiang rounded her up along with other pregnant women to abort her fifth child in 2007. "I was 6.5 months pregnant. (AP Photo/Mehmet Guzel)

This week, Israel abstained from a UN statement condemning the Chinese government for its genocide of the Uighurs.

It is shameful that a Jewish State created after the Holocaust refused to cry out against genocide. Is “Never Again” simply an empty mantra?
Of course, China -unlike Germany in the 1930s- is a very powerful country and Israel is a very small country. But since when does our small stature absolve us of the obligation to stand up to evil?
If Israel is a Jewish state, it should encapsulate the national memory of being victims on account of our being an ethnic minority- starting with enslavement in Egypt and culminating in the Holocaust.
But this failure is part of a larger trend: Israel signed on to the 1951 Geneva Refugee Convention, which was meant to protect refugees. The document was drafted in direct response to the plight of refugees refused admittance by neighboring countries during the Holocaust, who wound up dying in the gas chambers.
But Israel has repeatedly violated this convention in its treatment of Sudanese and Eritrean refugees. Furthermore the public conversation around these refugees has sometimes had racist undertones, painting them as criminal infiltrators who are a threat to Israeli women- paralleling some of the racist stereotypes about black people in the US.
But this racist rhetoric is not surprising when one remembers that Israel is engaged in an ongoing military occupation: This occupation can only exist if we maintain our sense of the Palestinian as the Other. And once Othering is baked into the fabric of a society, it will stay there, spreading out to Other more and more groups as time goes on.
We have seen the increasing effect of the Occupation on Israeli society in recent weeks: There have been numerous attacks by settlers against Palestinians – the types of attacks we would probably label terror if it were the other way around. The Army does investigate these attacks. But they also don’t do much to stop them from happening in the first place. Their primary mission is to protect the settlers.
Many of the settlers carrying out these attacks are religious, but the religious leaders remain silent. If confronted they say it’s a frame-up or these extremists are outliers, ignoring their increasing numbers. The general Israeli public is unaware because these attacks barely make the news.
What we have here is people being attacked based on their ethnicity, in the name of Judaism. Not in the name of Israel- many of these settlers see Israel as a leftwing sellout and sometimes they attack Israeli soldiers as well.
Many will say that Jewish sovereignity over Israel is a jewish value. That’s true. But is it true in all contexts, at all costs? Tanach is full of prophets telling Jewish kings to agree to be vassal states of the foreign powers and not to engage in nationalist rebellions against global powers. God dethroned a Jewish king who stole private land in the infamous tale of Navot’s vineyard (מלאכים א, פרב כא) – but stealing private Palestinian land was essentially legalized in the “Regularization Law,” which was later struck down by the Supreme Court.
But we have clear Jewish religious values of kindness and mercy:
“The world is built by kindness”. (תהלים פט:ג)
“As He is merciful, so shall you be merciful.” (רמבם הלכות דעות פרק א הלכה ו)
This even comes into play in Jewish jurisprudence: A law may be invalidated because it violates the dictum that “Her (i.e. the Torah’s) ways are pleasant ways and all her paths are peace”. In certain instances, a law may be uprooted for the sake of “the dignity of creatures (i.e. humans)”.*
There are also Jewish cultural values, such as identifying with marginalized and oppressed peoples based in our own history of being a minority.
Israel’s fulfillment of the Zionist vision is at stake if it abandons the Jewish values that help to make it a Jewish state. Because of that, it is not despite my Zionism, but because of my Zionism, that I am extremely troubled by the different ways that Othering has recently been manifesting itself in Israeli politics and society.
When I see Israel fail to speak out against the genocide against the Uighurs, I am ashamed.
As a granddaughter of Holocaust survivors who chose to move to the Jewish state because I wanted to partake in this new and exciting project in Jewish history, I am ashamed that my adoptive country is engaging in the same type of silence that allowed so many of my family members to perish at Hitler’s hands.
Israel may be the Jewish future. But that doesn’t mean it can forget the Jewish past.
––
* For more on meta-halachic principles see Rabbi Dr. Daniel Sperber’s “The Path of Halacha, Women Reading the Torah: A Case of Pesika Policy”, Rubin Mass, Jerusalem, 2007 (Hebrew) and his book “Paths of Pesika“
About the Author
Shayna Abramson, a part-Brazilian native Manhattanite, studied History and Jewish Studies at Johns Hopkins University before moving to Jerusalem. She has also spent some time studying Torah at the Drisha Institute in Manhattan, and has a passion for soccer and poetry. She is currently pursuing an M.A. in Political Science from Hebrew University, and is a rabbinic fellow at Beit Midrash Har'el.
Related Topics
Related Posts
Comments