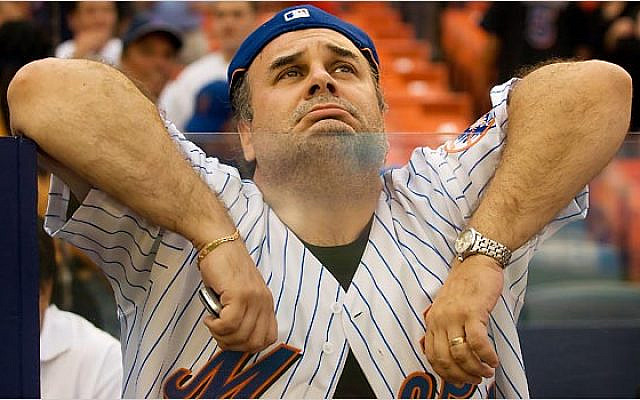 We all know about the difficulties observant Jews must face each year in dealing with taking off so many work days for the Jewish holidays in the fall.

But how about some sympathy for the Orthodox Jewish sports fan.  Every year the baseball playoffs are scheduled in October, which always correspond to at least a portion of the chagim in Tishrei.  And that means there are many missed games on television for observant Jews.

This year the problem is multiplied four-fold for the Orthodox sports fan.  Not only did the baseball playoffs conflict with the chagim, but because of the suspended seasons due to COVID-19, the basketball and hockey playoffs also overlapped with the Jewish holidays this year.  And as an additional inconvenience, since Rosh Hashana, Sukkot, and Simchat Torah all fell out on Sunday this year, that meant Orthodox sports fans missed three weeks of football games on television because we were busy celebrating the chagim.

As a Mets fan, perhaps I should not complain too much about this.  In the past 20 years, my beloved Mets have only made it to the playoffs three times – in 2006, 2015, and 2016. Compare that to the Yankees, who have played in the postseason 16 times during that same period.  So while I’ve been terribly despondent about the Mets ineptitude during the last two decades, I cannot grumble about having had to miss watching too many Mets playoff games because of the chagim.

Two of the most famous Mets and Yankees playoff games occurred on Jewish holidays.  In 1978, the first day of Rosh Hashana was on October 2nd.  It was also the day that Bucky Dent hit a three-run homer against the Boston Red Sox in a one-game winner-take-all  contest to help give the Yankees a 5-4 victory and vault them into the next round of the playoffs.  And while Jews across the globe were singing and dancing on Simchat Torah eve, October 25, 1986, Mookie Wilson was making baseball history with a ground ball that went through Bill Buckner’s legs and that gave the Mets a win in the sixth game of the World Series (they went on to win the series two days later in Game 7).  Orthodox Mets and Yankees fans had to settle to watch the highlights of those two classic moments after the chagim were over.

The problem for observant sports fans is compounded even further because a day later, after a game is completed, we still have no way of knowing who won the game and what the score was.  It used to be that the morning paper would have the box score of the games (as long as it wasn’t a game that was played on the West Coast that started too late to be included).  Today, even the games that start at 8PM Eastern time are not included in the paper the next day.  I guess the newspaper folks figure that anyone can get the score online.  Anyone, that is, except Orthodox Jews who happen to be celebrating a Jewish holiday that day – and who are prevented from turning on their computer or smart phone!

For a short period of time, I did have a solution to this problem.  The janitor at our synagogue in Stamford, CT, was a huge baseball fan like myself, and always was happy to share the details of the prior night’s game with me when I would see him in shul.  So while I was unable to watch a game live, I did get all the scores and stats the following day.   Alas, he is no longer working at the shul – and his replacement does not seem to care too much about baseball and other sports.

Most folks don’t enjoy the prospect of having to cook meals and entertain over a three-day yom tov – especially when it occurs three times in four weeks.  And for the Orthodox sports fan, this is no fun either, as it will often mean missing not one, but at least two playoff games.  Perhaps yet another reason to make aliyah and avoid a three-day yom tov (although it would probably mean watching a baseball game at 3AM if you moved to Israel!)

Ultimately, as much as many of us love watching sports, this small inconvenience during the fall holiday season does help place things into perspective.   As we celebrate the chagim, we have much to be thankful for … and still much to pray for.  Although missing a baseball playoff game of our favorite team because it’s Rosh Hashana or Yom Kippur does sting a bit when we first realize the conflict, in the scheme of things it helps us prioritize what really should be important in our lives.

And maybe one of these years, the Mets will be back in the World Series (and perhaps the scheduling gods will be sympathetic to the team’s Orthodox fans, and schedule games around the dates of the chagim).  Let’s hope so!