I found this sentence here:

It is contained in an appeal, a religious appeal, mind you, of the Palestine Israel Ecumenical Forum (PIEF) of the World Council of Churches to “join together in 2016 for a week of advocacy and action in support of an end to the illegal occupation of Palestine and a just peace for all in Palestine and Israel.”

The theme of the 2016 week to be marked September 18-24, is: “God has broken down the dividing walls” and social media activists are asked to use the hashtag #DismantlingBarriers.

The verse quoted comes from Ephesians 2:14. It has been interpreted as relating to Jesus who, in sacrificing himself, as it were, made thereby peace by facilitating a union with the Jewish believers in one church. Through this sacrifice and the belief in Jesus as the mediator people can draw near to God as a Father.  Theologically, as the next verse makes clear, this unity was accomplished by ending the Torah commandments as a system of law and doing away with halachic regulations. Peace between Jews and Gentiles is done by Jesus creating in himself one new people from the two groups.

On that level of religious dialogue, there is nothing to discuss. Jews do not require intermediaries and diplomatically, as Mr. Netanyahu has made clear, no preconditions are direct negotiations.

But what should be noted is that these church people are still stuck in the definition of Israel, the product of Zionism, as being born in sin. The problem is 68 years old.

Moreover, these church people should be informed that it is not Israel’s responsibility to create a “Palestine” as an Arab state.  Jesus himself was born in Judea, in Bethlehem. he was (do I hear cries of aghast) a “settler”:- 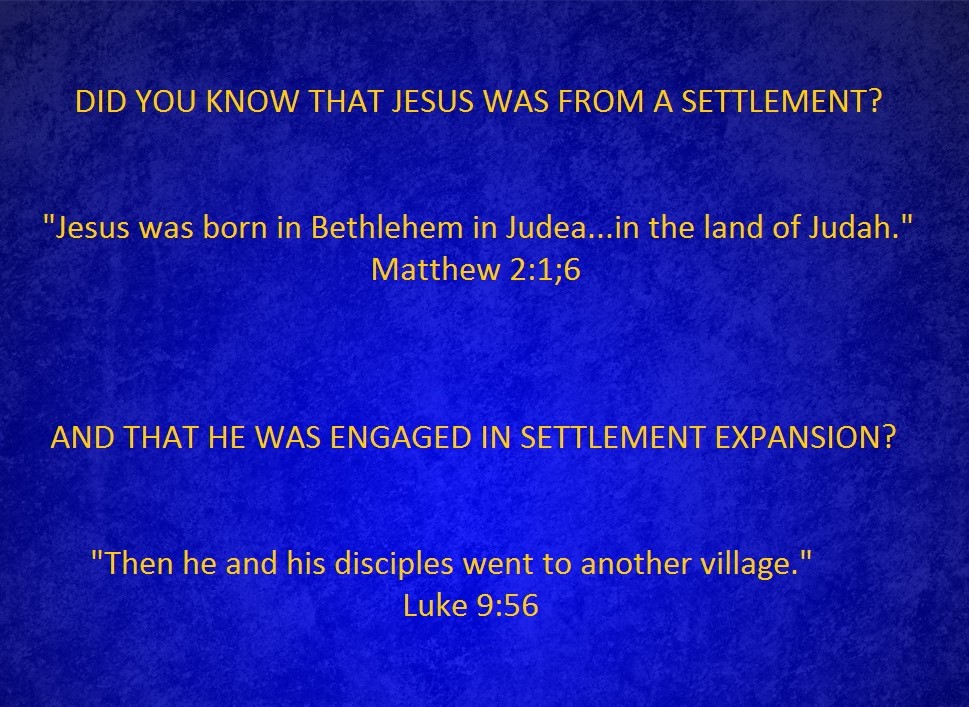 Jesus’ parents were instructed to return “to the land of Israel,” not Palestine. There was no “Palestine” then. Probably no Arabs either. There were no two states. If there was a dividing wall or a security barrier, it was manned by Roman invaders and occupiers, just as Arabs invaded the Land of Israel in 638 CE and occupied the Jewish national homeland. Jesus was not a Palestinian and it would have been those Roman soldiers preventing his parents from returning to Bethlehem.

The “tragedy” of Arabs-who-call-themselves-Palestinians is one of their own making and only them can resolve their self-contradiction. We Jews, we Zionists were forced to yield up a large part of the Land of Israel to establish an Arab state now called Jordan. When we accepted the UN 1947 Partition proposal, dividing ourselves from what was left of the Land of Israel west of the River Jordan,, the Arabs refused. That decision created their tragedy.

All that we are required to do is proceed with our national identity and what it behooves us to do in this land and, to borrow an image, to forgive the Arabs, even though they know very well what they do and plan to do.

And as for those PIEF church people, first, change that hashtag to #DismantletheTerrorInfrastrucure and, if they want truly to be ecumenical, let them recall this New Testament verse:

salvation is from the Jews