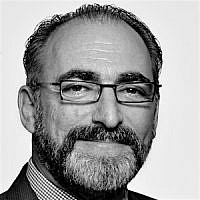 The Blogs
Winslow Swart
Apply for a Blog
Advertisement
Please note that the posts on The Blogs are contributed by third parties. The opinions, facts and any media content in them are presented solely by the authors, and neither The Times of Israel nor its partners assume any responsibility for them. Please contact us in case of abuse. In case of abuse,
Report this post. 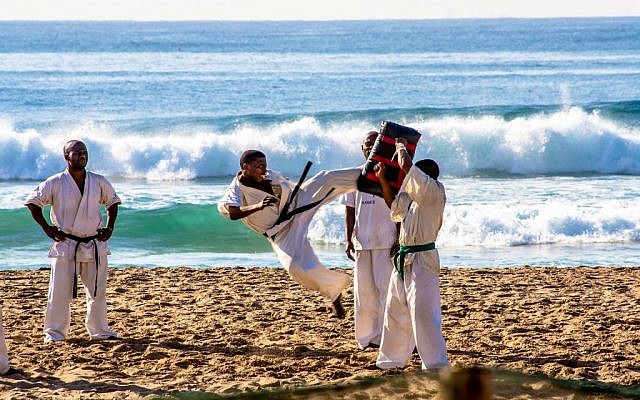 Karate at the beach (Pixabay)

As we near 100 terrorist knife attacks, 220  wounded, 22 murdered, and several other acts of terror that have plagued our country these past few months, it became clear after only a few weeks into this unofficial intifada that I was fully incapable of standing by in the USA and just do nothing.  The action I felt compelled to take was to go to Israel and help fortify the people there by conducting defensive tactics and situational awareness seminars for both civilians and uniformed peacekeepers. 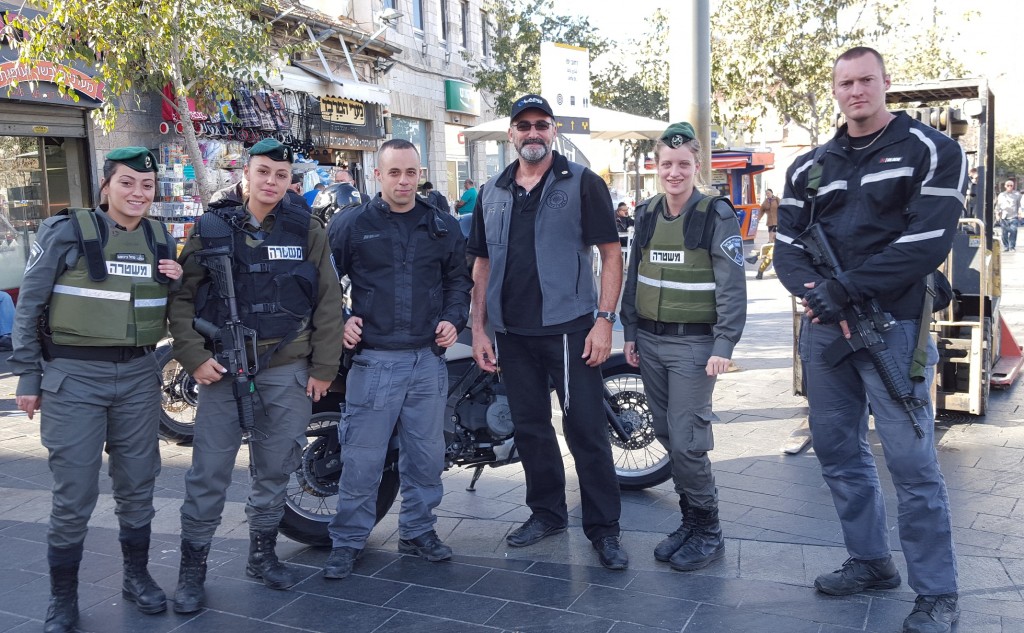 Winslow Swart with the Mishteret – Security Police in Jerusalem

Quite suddenly, with the help and support of members of the San Antonio, Texas Jewish community and several other dear friends and acquaintances, I was able to raise most of the funds needed to fulfill a two-week training mission in Israel which took place November 22 through December 6th of this year. 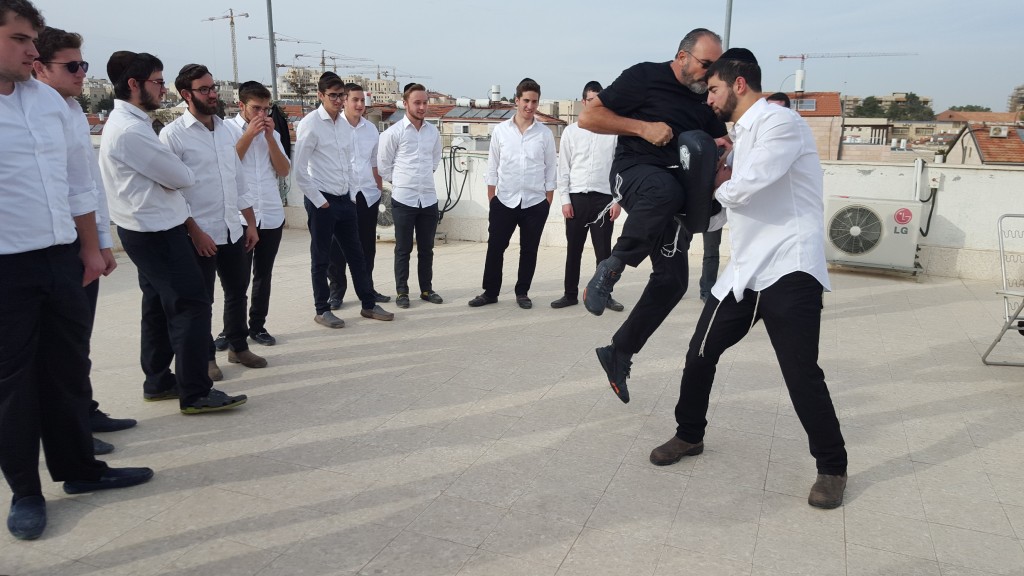 How this all started was rather unexpected. Right after the Har Nof synagogue attack last year, I hastily published a video that showed how to defend against a knife attack with ordinary, readily available objects. These included a tik (satchel), a book, and a broom. Though the video was not scripted or professionally produced, it got the point across.  I reposted the video right after this new wave of attacks and it immediately received over 10,000 views. There were requested for more videos showing a wider range of self-defense against knife attack scenarios.

My 16 year-old daughter and I threw three more videos together and several more thousand views later the question kept being raised by viewers in Israel, “when are you coming?” It took just one half a night’s sleep to decide and then throw up a gofundme page which began to gain traction almost immediately. So that was it. I was committed and the rest would be a matter of logistics. 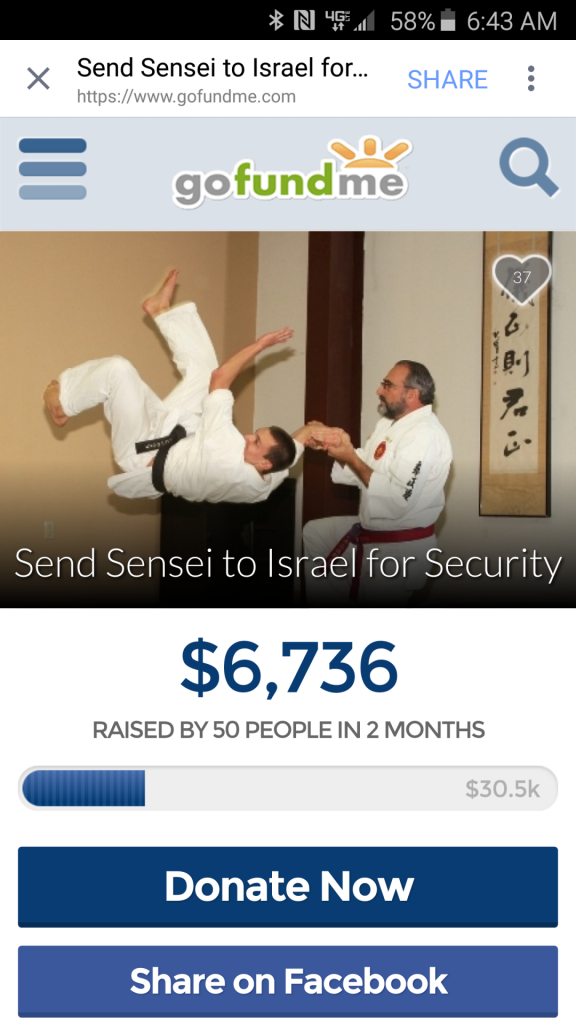 Screenshot of the GoFundMe page that helped get this mission going. The goal amount has been increased as additional trips are being planned

In the past, I had trained a broad range of security, military, law enforcement and civilian populations, but not usually back-to back in the same day. This, I found to make things more interesting and I embraced the challenge. I watched as many raw feeds as were uploaded daily of the various attacks in Jerusalem and throughout Israel in order to study the situation and environment and design the most effective curriculum.  Just as important was the understanding of the acumen and disposition of each individual and group to be trained. 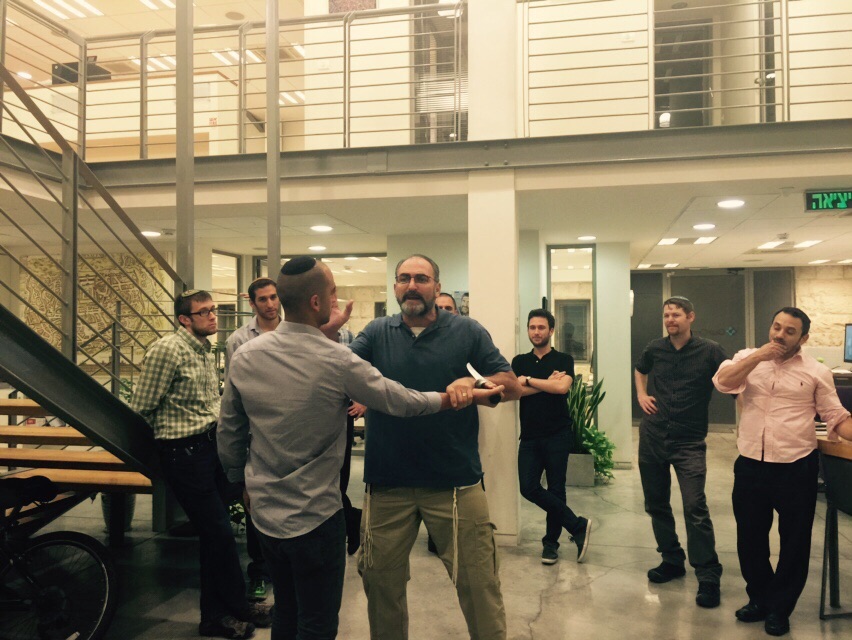 Training technology venture capitalists at OurCrowd in the JVP complex

I conducted 12 seminars in and around Jerusalem, Tel Aviv/Holon, Ashqelon, Har’e Yehuda, and The Negev for participants that included Elite IDF Forces, at-risk youth, tech-sector workgroups, high school and college yeshivas and seminaries. This wide-range of participants required the recalibration of training content which turned out to be, based upon the feedback, quite successful. 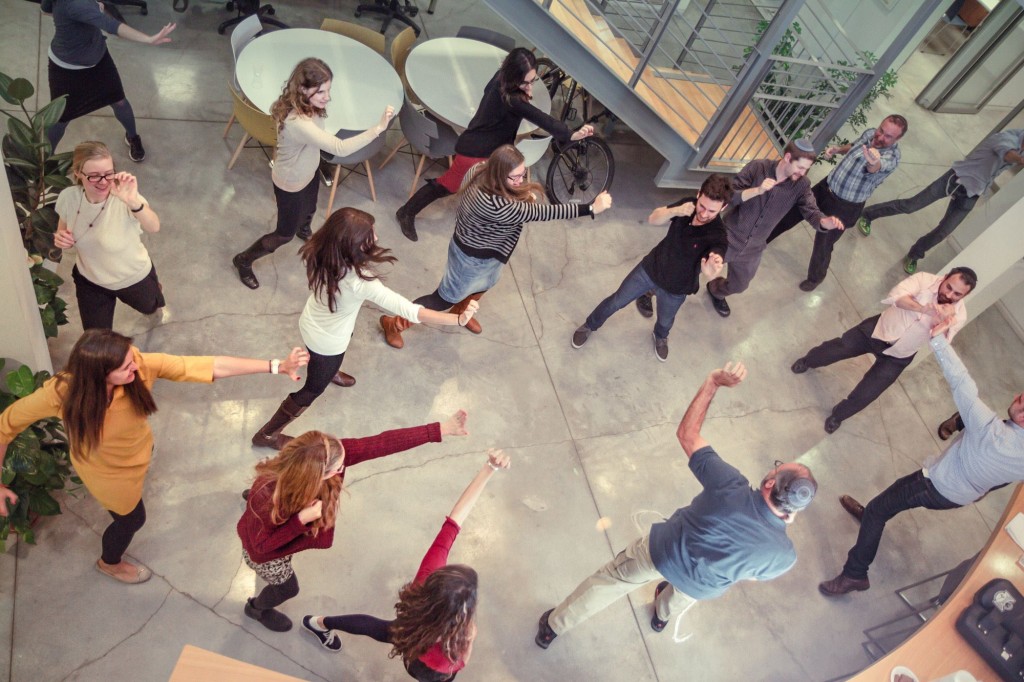 OurCrowd is Jonathan Medved’s company that democratized technology funding and hosted a self-defense against knife attack seminar. The Swart girls teach an ongoing self-defense class there. 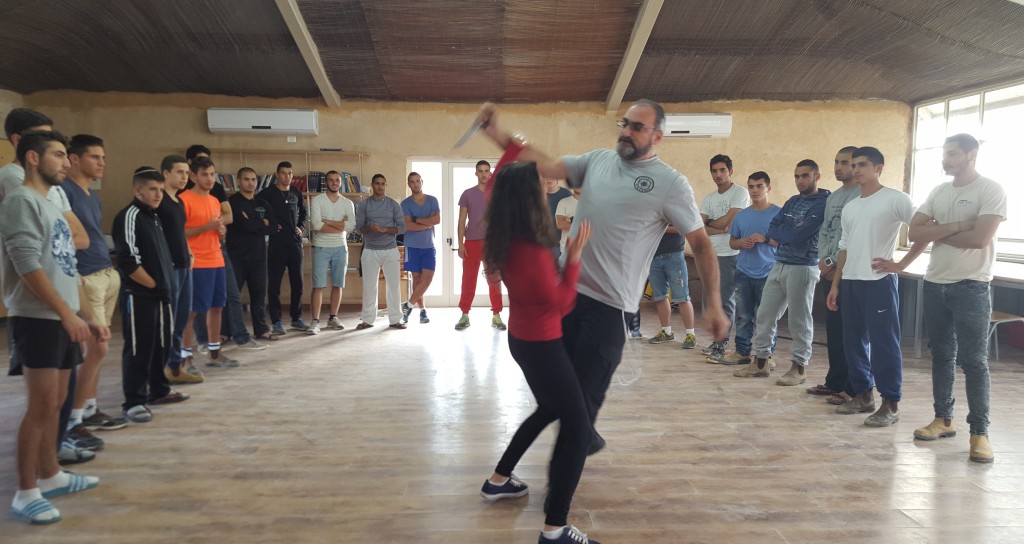 Sensei’s Daughter, Shevy Sensei, shows a knife defense technique at full-speed to the chayalim in Yerocham

Three key-thrusts that comprised the training program, developed to match the current conditions and crisis in Israel, were:

1) Everything taught today must be able to be used today. The defensive tactics techniques in this program for use against knife attacks are movements the body can do well naturally, the strikes are those where natural strength exists, and the target areas inherently vulnerable; 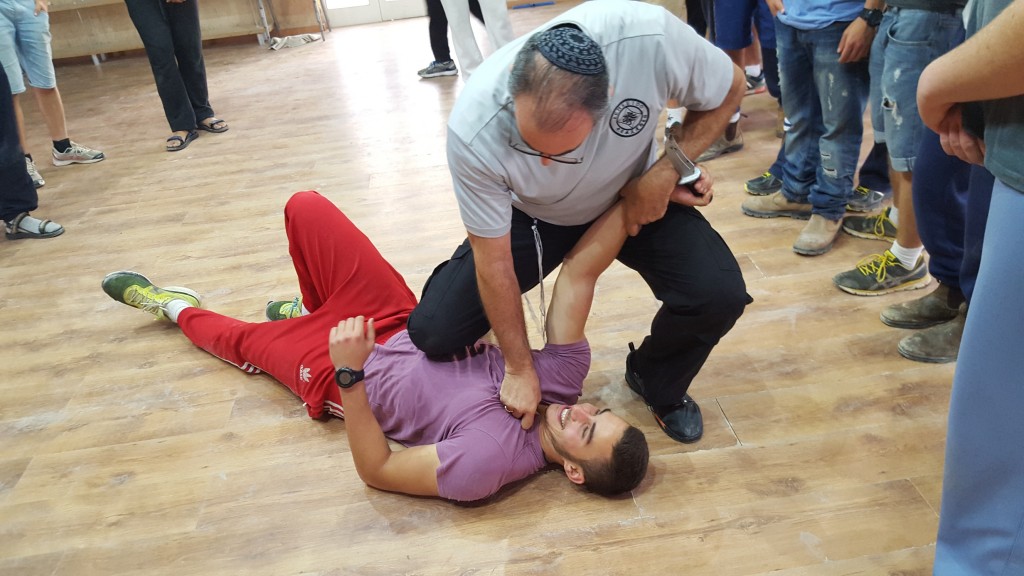 After redirecting a knife attack, Sensei Swart shows an inherently vulnerable point at the base of the throat. Yerocham, The Negev.

2) Situational awareness must be 360°, training for developing both sight and perception was a key component; there is no such thing as behind you;

3) The shift in being from victim to warrior is not an option. Fear and anger is a short lived fuse. Hyper-stimulated amygdala-based flight or fight responses, as taught in krav maga, are not sustainable. The source of power must originate within the core. The bio and emotional mechanics of effective command presence and energetic power and focus serves higher-order functioning while under combat or terror-duress and the ability to attain a profound sense of inner-confidence, inner-calm which also off-sets the stress effects of having remained at heightened alert for prolonged periods. 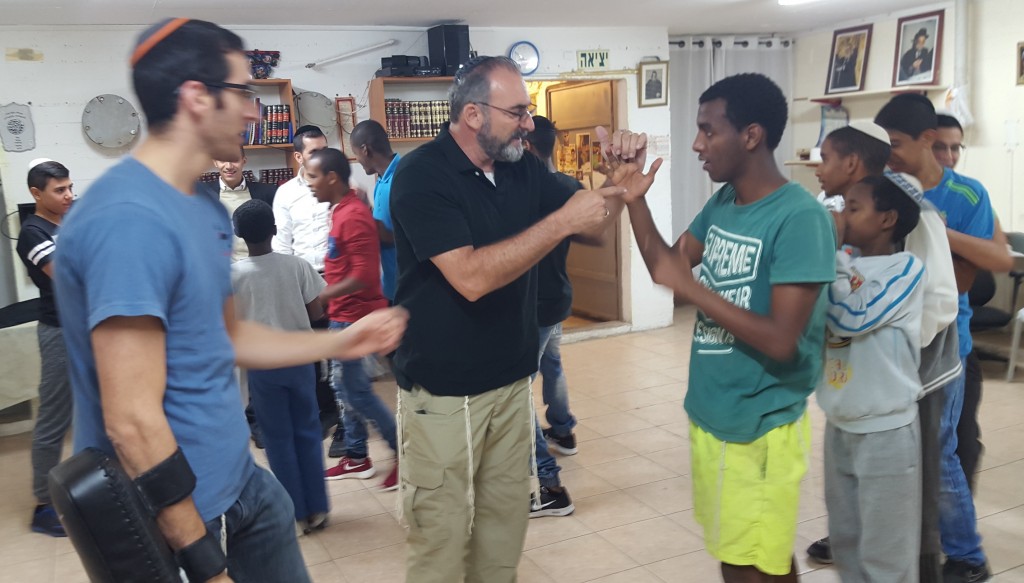 While in the Jerusalem, I worked with extensively deployed PTSD affected combatants who now serve on security details in the Old City, one of whom commented he had waited 15 years for this kind of training.  Much progress was made in a very short time. 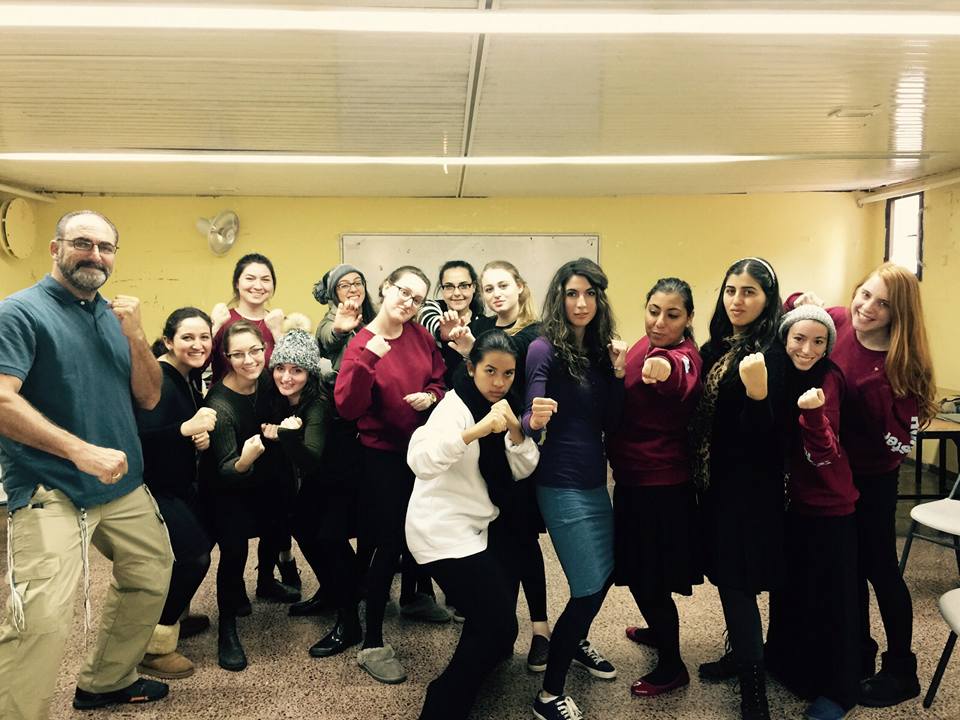 The program was very well received in Israel and requests for more training from several additional groups and organizations continue to pour in. Plans to return to Israel soon to meet this demand are already underway.

One of the reflections I have after returning to Texas is that coming to Israel to give, and not to receive, is perhaps the most rewarding experience I have ever encountered. I did not charge any fees for these seminars while in Israel, though I feel I was paid with love. Israel put its arms around me and embraced this program, and for that I am grateful and feel compelled to do even more. 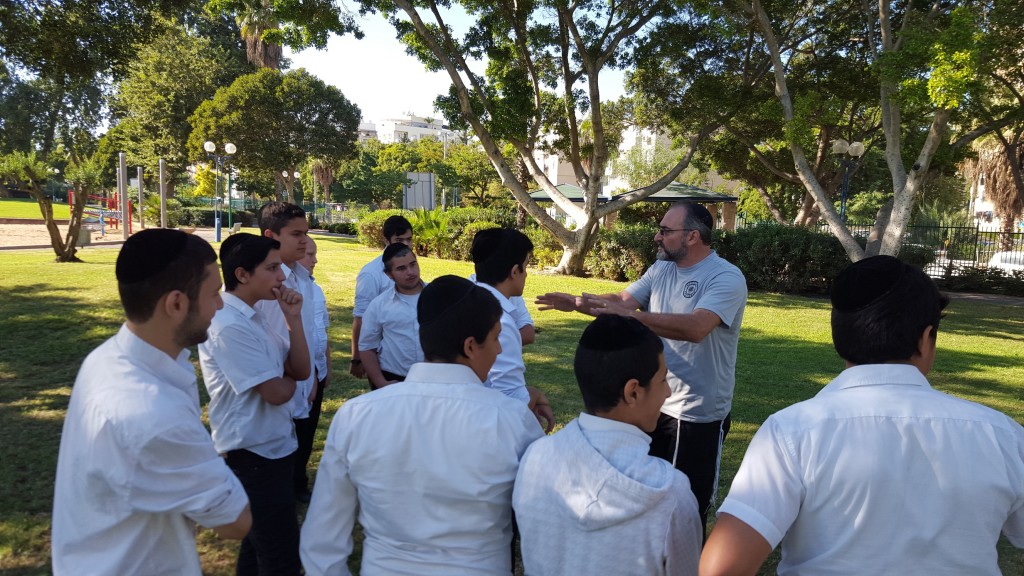 Tsevet Lehomim training with Sensei Winslow Swart in the Gan Sacher
About the Author
Winslow Swart is a Japanese trained 7th Dan, Kendoshi Sensei in the martial art of Kenseido, the highest ranking master instructor outside of Japan. Winslow has trained federal law enforcement agencies, has served in the United States Presidential Motorcade, and for the past 30 years teaches self-defense to children and adults at his dojo in San Antonio.
Related Topics
Related Posts
Comments