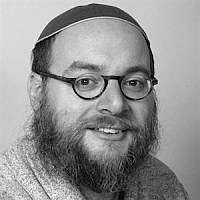 The Blogs
Dov Oliver
Apply for a Blog
Advertisement
Please note that the posts on The Blogs are contributed by third parties. The opinions, facts and any media content in them are presented solely by the authors, and neither The Times of Israel nor its partners assume any responsibility for them. Please contact us in case of abuse. In case of abuse,
Report this post.

Cooked food is delicious. It’s warm, flavorful, maybe even spicy. But there’s a virtue to things being raw. Raw is real. It’s not covered up or disguised in any way. It’s clear, vulnerable, honest and open. I recently spent four very raw days in Israel. It was family time.

We paid shiva visits to family we had never met. Raw connection.

We made hospital visits to injured family members. Raw love.

We heard family screaming with terror in the shuk. Raw fear.

I’ve had the great privilege of leading 16 Birthright trips. A key word we teach the participants on day one is mishpacha — family. It becomes a theme throughout the trip. The classic message when you come to Israel you are coming home, to family. But never did the truth of that message sink in as much as in these four days.

In response to the tragically orphaned Sara Techiya Litman’s now famous invitation for the entire Jewish nation to “arise from the dust and rejoice with us,” I found myself traveling to Israel for Thanksgiving Day wedding with six college students who had won the opportunity to represent their campus in various raffle campaigns. We were seven souls representing more than seven hundred others. 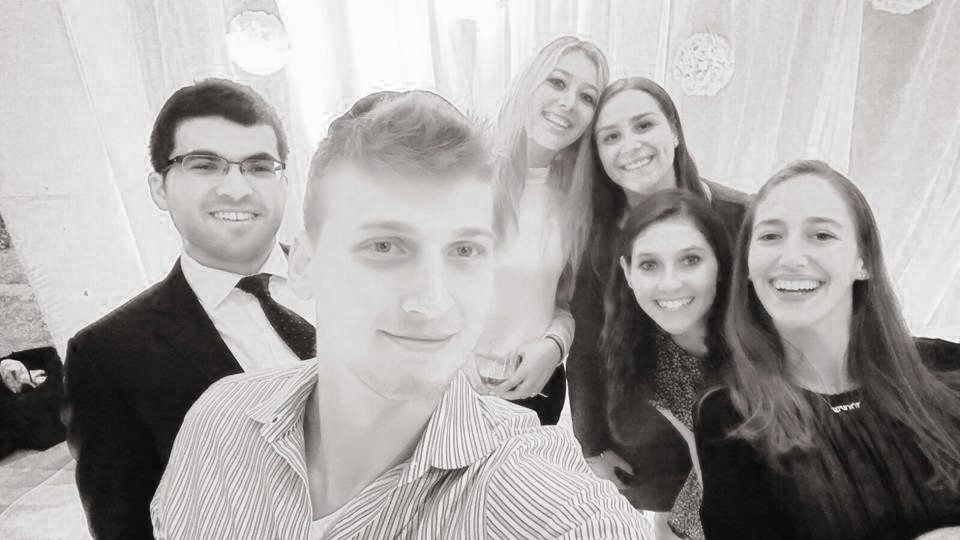 We had the honor of meeting the kallah before the crowds arrived. We passed on a sizable wedding gift — the extra money raised from the campaigns — as well as mazel tov cards from American children. Every bride looks beautiful on her wedding day, but Sara Techiya looked like an angel, beaming with purity and sincerity. Her eyes, a window to her soul, told of an innocent young girl forced to mature overnight. Our girls embraced her and danced her to a chuppah bursting with emotion — tears of anguish flowed with tears of joy. The wedding guests came in droves, from all over Jerusalem, from all over Israel, from all over the world.

Thousands of men, women and children desperate to dance pushed their way forward in a tidal wave of comfort and compassion, all the while singing Am Yisrael Chai, displaying a level of excitement normally only exhibited by the family and closest friends at a long-awaited wedding. But that made sense, after all, it was a family affair. 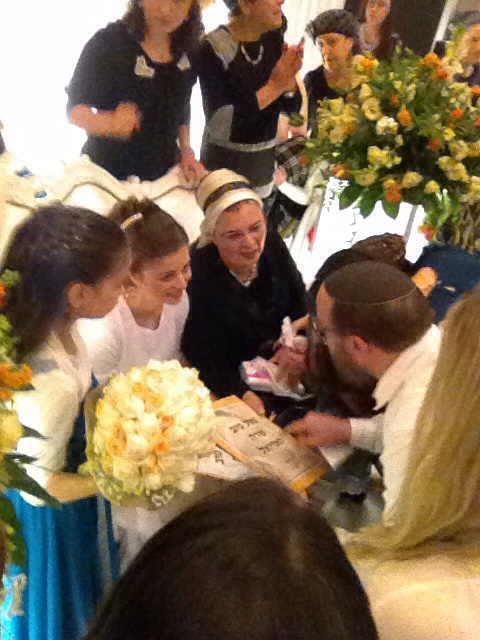 Courage in the Face of Tragedy

Friday morning was a very different pace, with shiva visits to the homes of Ziv Mizrachi a”h and Hadar Buchris a”h. Two special souls, brutally, senselessly murdered by evil Jew haters. When we arrived at shiva, it was as if we were family expected to be there and had finally arrived.

Ziv’s parents told us all about him, and the group shared words of encouragement. For Ziv’s father, this was not the first relative killed by a terrorist. His uncle, Alon Mizrachi, was murdered in a suicide bombing in 2003. Sara from Queens College delivered special words of consolation. Her friend in America, also named Ziv, had called her the day that Ziv Mizrachi was killed to say that after wrestling with his decision whether or not to join the IDF, upon hearing that a boy carrying his name had been killed he decided to enlist. Hearing this, Ziv’s mother broke down in tears and insisted that Sara invite the American Ziv to stay with them when he came to Israel.

The shiva call at the Buchris’ Netanya home was very hard. How can one make sense of such horror when things were looking up? Hadar had just returned from an inspiring trip to India. She had discovered her passion, to be a mother and a teacher. Weeks spent with the Chabad emissaries in Pushkar, India, had inspired her to come closer to Torah and mitzvot. The very day she returned, she made a deal with a family member that he would start putting on tefillin daily. Hadar’s mother, Sigal, told us that after seeing her daughter’s spiritual arousal, she decided to gift her with a long held treasure, a dollar she had received from the Lubavitcher Rebbe 30 years prior. Segal said, “Hadar’s reaction to receiving the dollar was as if I had given her a huge diamond! She was jumping up and down, hugging and thanking me.”

Days before her murder, Hadar wrote on Facebook, “The nation of Israel cannot suffer anymore, it simply can’t!” But it did. And it is.

An incident at our next stop, the Machaneh Yehuda shuk, clearly demonstrated the reality of life in Israel today. 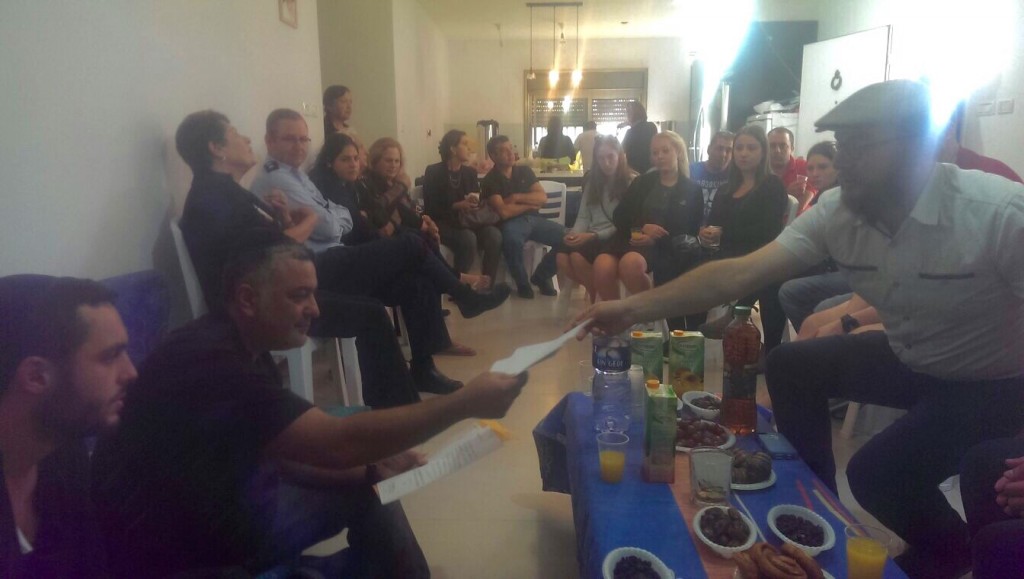 Terror in the Shuk

Amid the lively Erev Shabbos hustle and bustle, that wonderful setting was interrupted with a shriek of terror. People scattered in all directions, dropping packages, grabbing loved ones, panicked, terrified. Within a few seconds, everyone realized it was a false alarm. They were not going to be stabbed, shot or run over. A young girl chatting on her cell phone had been startled by a small dog and screamed. Everyone freaked out, as can be expected from such a hyper alert, traumatized society. One teenage boy bolted as far as he could, 100 yards away. Even after it was clear he wasn’t in danger, he was slumped down in the middle of the shuk, sobbing uncontrollably while his mother stroked him, trying to reassure him as he was saying, “I thought it was my turn, I thought my time had come.” In a beautiful gesture, people came over to him, offering rugelach and candy. Touching but tragic.

Down, But Not Out

Shabbat was spent praying at the Kotel and sharing meals with friends. On Motzei Shabbat, we headed to Shaarei Tzedek Hospital to visit with Daniel Korotine, a lone soldier from Germany who was run over by a terrorist on his first day in Tzahal, miraculously surviving after the terrorist was shot, but left with a broken leg and other wounds. What a sweet, wholesome energy he gave off. Humbly defiant, he told us that he was not deterred; he’d be back in the army to defend our homeland. No one would have blamed him for returning to his family and friends abroad. But he had a belief and the terrorists didn’t shake it.

In the next bed was Amal, a 34-year-old Druze IDF officer who was also run over in a terrorist attack. We pulled the curtain away and included Amal in all our celebrations and prayers and a very entertaining impromptu show to cheer them up. Amal’s mother, Ala, vocally shared her feelings about Israel and the Jewish people. She grew up in a home where the Jewish people were respected above all others. She expressed her wish that the Jewish people be the only rulers of Israel forever until Moshiach comes! 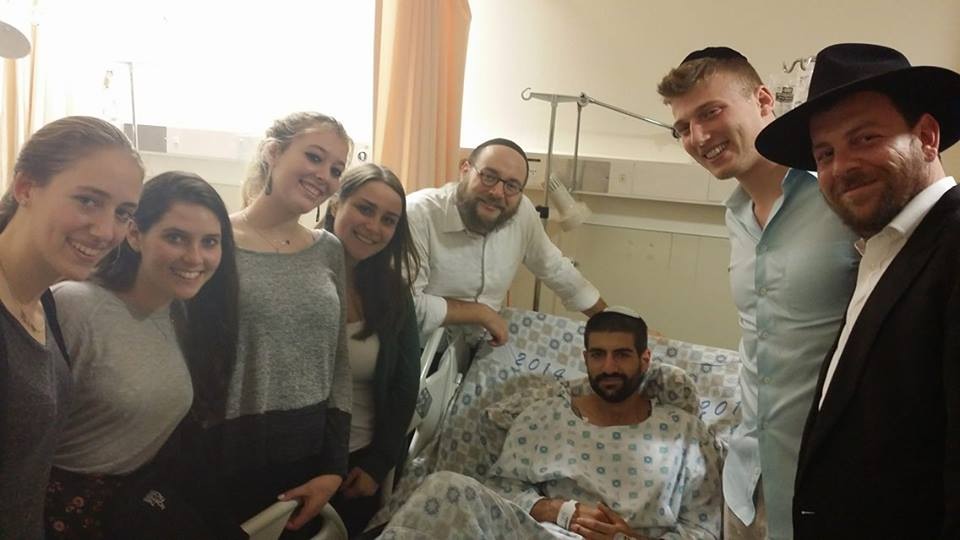 Our last stop was to volunteer at Pantry Packers, an incredible project of Colel Chabad that feeds thousands of poor Israelis daily. It was a fitting end to a short, but emotional trip, as the group connected deeply with the challenges facing Israelis today.

But it seemed that G-d wanted me to have a first hand-experience of the situation. On my way to the airport, my taxi was rammed by an Arab driver of a city bus. Thank G-d, it wasn’t terrorism, but it was terrifying. Yehuda the taxi driver had just told me to put on my seat belt when I heard him scream. A huge green bus was barreling towards us, going the wrong way on a narrow one way street. In perhaps the scariest moment of my life, I heard Yehuda scream Shema Yisrael. I looked up from my phone and couldn’t see the sky, the sun, couldn’t see anything. Just the bus. Although the bus driver braked and swerved, we were hit, hard. The taxi was pushed back about 50 feet, the airbags deployed, and for an instant I thought my time had come. Miraculously, I walked out fine, with only a sore back that stopped hurting a day later. Yehuda, too, was fine, aside from a bloody nose and a precautionary arm sling, which, in typical Israeli fashion, he discarded when the medics were not looking. We gave a police report, declined to go to hospital and accepted the bus driver’s profuse apologies amid his tears at the prospect of losing his job.

I truly felt like my life had been given back to me in a way. I took this last crazy incident as a reminder that as much of a connection as I have to Israel, I need to make it even stronger — to be there in spirit all the time and in person as often as possible. I resolved to send more people to Israel for Birthright, to study, to volunteer, to live.

Time to Come Back

As the plane took off from Ben Gurion, a wave of sadness washed over me. Typically, when I fly back, I have dozens of Birthrighters to keep me busy and entertained. This time, I was alone and aching at the thought of being away for another half a year. I resolved on the spot to bring my family to Israel in the near future. Although my daughters have kissed me goodbye twice a year for the last eight years, they have never been to Israel. It won’t be easy to save up for it, but it will be worth it, as much as anything else I could spend on.