Several months ago, I wrote a column about important and powerful “Four Magic Words.” Those words are “on the other hand” (OTOH).

There, I examined the need, while making a policy argument, to use OTOH to raise and thoughtfully scrutinize opposing positions rather than ignore them. No need to agree, of course, though sometimes — rarely, to be sure, but sometimes — considering opposing positions might change, or at least revise, a position taken originally. (I’ve been working on this in my own writing. Certainly I’m not there yet, but hopefully I’m getting better.)

OTOH, there’s another side to OTOH; it applies not only to the substance of policies but to their consequences as well. I realized this recently, when a small yet serious issue exploded on a family email thread.

Some background. Recently, a group of Israeli rabbis and others broadly affiliated from left to right with the Dati Leumi community issued a letter about the problematic use of disposable utensils during the Rosh Hashanah/Yom Kippur/Sukkot season. It was signed by 31 named rabbis and an unnamed group of rabbis and rabbaniyot (Hebrew plural of rabbanit) affiliated with Beit Hillel — a group of male and female Israeli religious leaders who are committed to and observant of halacha while believing in an “authentic, enlightened, inclusive Judaism.”

The gist of their letter was that “it is an obligation from a Torah, religious, and moral perspective to reduce the use of disposable dishes during the Tishrei holiday season.” (The letter was in Hebrew. I take responsibility for the translation though I was aided by a nephew, an American oleh, who has professional experience in Hebrew to English translation.) 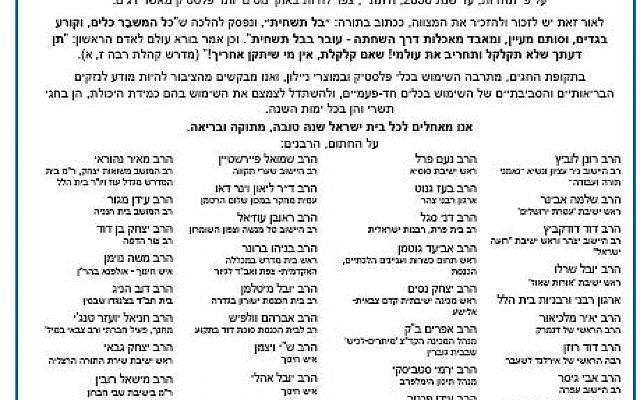 It then went on to discuss the fact that Israel is a leader in the per capita use of disposable utensils, the dire health and environmental consequences resulting from such use, the importance of the mitzvah of baal taschit (the prohibition against wastefulness), and humankind’s obligation to preserve the world. As God told Adam in the Garden of Eden: “See to it that you do not spoil and destroy My world; for if you do, there will be no one to repair it.” (Midrash Kohelet Rabbah 7:1.)

The letter ended with a request that because “during the holiday period the use of disposable dishes and other utensils is highly increased, we call upon our community to be aware of the health and environmental damage caused by the use of these utensils and to try to minimize usage of them as much as possible both during the Tishrei holidays and throughout the year.”

So, who other than a climate change denier could be against this?

Well, it’s not so simple. After the letter was circulated among my family, one of my daughters noted: “The problem with these rabbis’ exhortation is that the washing and drying time is IMMENSE and falls disproportionately on a limited group of people, The environmental cost of single-use plates and cutlery is bad, yes — but rallying around an environmental cause without considering how the burden is then distributed, and without considering the context of all the other work being done to make the holidays and what adding another big task to the pile means in that context — is a pretty unimpressive feat of tunnel vision.”

She went on like that for four more thoughtful and highly articulate paragraphs, expanding and amplifying, but you get the idea. And she concluded: “I’d have no problem with an environmentally motivated letter urging everyone to generally cut down on single-use cutlery and utensils. But criticizing those who use it for big yom tov meals without actually thinking about who is going to end up with the extra work and when will they be able to do it? I can’t begin to express how angry it made me.”

My wife joined in. “This is not a matter of adding in some extra time for washing and drying so as to make the more ecologically sound choice. At least not for those of us who have anywhere from 15 to 20 or more people at yuntif meals, several in a row, whether on 2- or 3-day yom tovim, and who don’t have the luxury of live-in help to do the work. While in some families men share some of the cooking and pitch in during serving or clearing, my experience is that it is still the women who are responsible for almost all of the prep, cleaning, putting away the food and washing up…. Yuntif is a wonderful time for families to enjoy time together, but the women bear the heaviest load of the meals and all that is attached to that, and to think that they are being told to add a significant amount of time and effort is extremely irritating.”

The conversation expanded. My sister-in-law, who lives on the eighth floor of an Upper West Side co-op with a courtyard sukkah, noted that she has to “bring everything in a shopping cart (and, hopefully, not forgetting anything). Imagine if I had to bring our pottery or china plates and drinking glasses down to the Sukkah in my shopping cart!” And an always practical niece in Israel added: “Most people don’t have more than twelve settings of dishes.”

And this is just a taste of the discussion, with some men noting that they personally share equally in the holiday workload, and that they know that some of the male signatories to the letter assume much of the dish-washing duties in their homes.

Interestingly, this is not as easily broken down into a gender dispute as the above might make it seem. As noted, a group of rabbaniyot also signed the letter, which was the initiative of a non-religiously observant 27-year-old female brain science student at Ben-Gurion University. And two lengthy Facebook threads I saw discussing this issue had both men and women vigorously arguing all sides.

My point here is not to get involved in the nitty gritty of the environmental and health issues. Almost everyone in our family and the FB discussions agreed that using disposable utensils is not what most people who care about our planet think is a great idea, all things considered. But there’s the rub — the rabbis and rabbaniyot did not consider all things. There was no mention of the resulting substantial cost in human labor, which is not, and often cannot be, shared equally; no mention of how following their suggestion therefore places an extra burden on already overburdened (in the main) women; and no mention of how those women thus miss out on much of the camaraderie, family warmth, fascinating table discussions, and singing when being consigned to the kitchen to wash yet more dishes, silverware, and glasses.

So to return to consequences OTOH. The letter would have been fine if the writers had mentioned the things they did not; if they had added something like the following: “OTOH, there are serious consequences to not using disposable utensils such as [list the consequences discussed above], and these consequences must be carefully weighed before any changes in practice are implemented.” Indeed, they perhaps could have added that their request about minimizing disposable utensil use should be followed only if the men in the family who are able to do so also share equally in the burden imposed by such a decision.

Some policy issues are simple, some are black and white, and thus, as Tevye’s anguished cry about Chava’s marriage taught us, have no OTOH. But those are the exceptions in our all too complex and all too gray world.