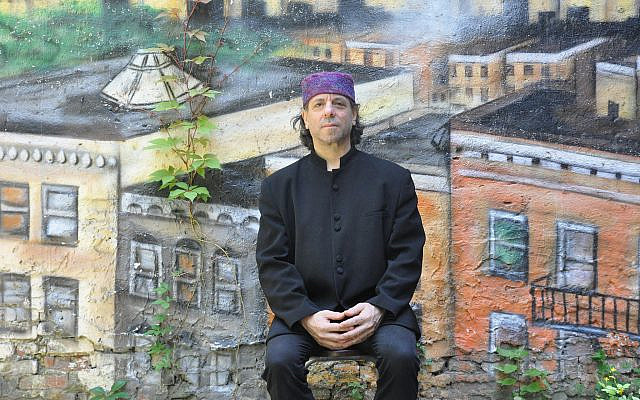 7 p.m., Sunday night, October 25, it all went down live on stage and on screen. Live from Edmond J. Safra Hall, at the Museum of Jewish Heritage — A Living Memorial to the Holocaust, in Battery Park, in downtown Manhattan; streaming on YouTube to a paying audience of roughly three-hundred souls, watching from their homes, an electric explosion of Yiddish music and culture occurred in the cosmos. I was lucky enough to catch what was about the full hour in length.

Sir Frank London is a Grammy Award winner, who was Knighted for his services in Holocaust history (and artistic memorializing), with a concentration on Hungarian Jewry and ethnic-Roma people. The trumpeter is the founder of the classic (maybe single most successful, ever, in contemporary klezmer music) Klezmatics. A while back, (something like the turn of the millennium) he started Frank London’s Klezmer Brass Allstars, with whom he has traveled the world and recorded some five albums. The performance Sunday night was the Brass Allstars along with the raspy singing and theatrical personality of Yiddish-English vocalist and actor, Eleanor Reissa, who graced the stage for what seemed like the majority of the evening; and “Punjabi percussion virtuoso Deep Singh,” as he is introduced on the Museum’s website’s events page. The concert advertised a suggested donation rate of $20, but insisted that “no contribution is too small…”

Frank London, who teaches on the music faculty at SUNY Purchase, graduated in 1980 from the New England Conservatory of Music, where he studied Afro-American Music. He has worked with such rock and pop musicians as David Byrne, David Gilmour and Pink Floyd, John Cale, Ben Folds Five, LL Cool J, Luna, Natalie Merchant, Iggy Pop, Jon Spencer Blues Explosion and They Might Be Giants. Displaying versatility along with his knack for being globally and culturally hip, he has also worked with musicians as diverse as the wonderful Palestinian musician, Simon Shaheed; the Hassidic-Frank Sinatra: Avraham Fried; violinist Yitzhak Perlman; Beat poet: Allen Ginsberg; the mysterious Jewish composer, bandleader and saxophonist John Zorn; the ‘Velvet Fog,’ Mel Tormé; and saxophonist, famous among DeadHeads for sitting-in with the Grateful Dead in the ’90s, David Murray; (as well as with Cuban-American guitar maestro, Marc Ribot), among others.

For the performance, Frank London wore a black suit and cap with a red feather, and a red shirt. He has a slight gut for a belly, and his dark hair is somewhat long. The musicians in the Klezmer Brass Allstars seemed to be a different line-up than the musicians he features and lists on the group’s website. Before the first number, he introduced the band’s members, but the levels were coming in too low, and the speaking into the microphone was not nearly as audible as the brass blowing. Edmond J. Safra Hall is a wood-paneled auditorium that looks like it would have great acoustics and probably does. Having to hear the music come through the Internet, streaming, on one’s computer monitors, in one’s living room, bedroom or kitchen cannot really do a justice to what one would expect the acoustics of the auditorium to be. And that was a detractor from the experience. But how can you complain about seeing a legend make musical history? For what it’s worth, the instrumentation for the evening went as follows: trumpet: Frank London; accordion: Ilya Shneyveys; guitar: the talented (but…I’ve got something to say about it later) Brandon Seabrook; trombone: Brian Drye; clarinet: Michael Winograd; Ron Caswell playing the bass notes on tuba; and drums: Aron Alexander.

The group opened with a marching waltz. Frank proved that he can blend chromatic blue-notes with the scale-tone flats of various minor scales all in one single phrase. This must be one of the tricks that leads the critics to tag the trumpeter as a “multicultural” and “multiethnic” bandleader, musician and composer. The band swings hard behind vocalist Eleanor Reissa. “A lot of the songs we do today are from a long time ago,” announced Reissa between tunes. They then launched into a song written in the ’20s about “money.” It was a brass-blasting waltz. The Yiddish singing was broken-up by interspersed speeches in English about what people will go through for ‘gelt’ the Yiddish word for money. Thirty-five minutes in, London invited Eleanor to take a break and announced that the evening had gone from “warm to hot.” He then invited percussionist Deep Singh onstage, who walked out with a dhol strapped around his shoulder and sticks in his hand to beat the double-sided barrel drum. They began with a funky cut-time, harmonic-minor slam. As always, Frank’s use of a plunge-mute was colorful and evocative of American music, rather than the Eastern European roots, from which the repertoire usually draws. Deep Singh’s percussion solo was outstanding; however, the guitar seemed off, playing outside of the scales and key when it came time to solo. As it stands, as a composer and bandleader, working with electric guitar is a weakness of London. Perhaps a weakness, because he really likes it, like a culinary ingredient that one puts into everything. But I dare say ‘weakness’ on account that he seems to overuse it, and a little goes a long way, because his directions for guitarists is not coming from a place of originality. The 2017 release of Glass House Orchestra (Astro-Hungarian Jewish Music) featured electric guitar playing that seemed like an uninspired imitation of the work which Marc Ribot was commissioned to perform with John Zorn’s Electric Masada and Bar Kokhba Sextet, and always masterfully rose to the task. But give Frank a break. One of the challenges to having electric guitar in a klezmer combo is that they didn’t have electric guitar back in the good old days. While jazz guitar was made famous in Europe by one ethnic-Romani stalwart, named Django Reinhardt, it would seem to this critic that in Jewish music, the guitar is really a Sephardic instrument, only in citing its Moorish origins.

Close to one hour in, the band did a moody tune with Eleanor on vocals. Halfway through the song, the guitar began playing powerful minor chords, letting them ring for multiple bars, redeeming itself, and accented by dirty overdrive. Finally, a song sung in English and Yiddish, ‘Forget Me Not’ featured a smoking trumpet solo by Frank. About forty-two minutes in, Eleanor, Deep and the band began playing a dark, bouncy vamp, (that sounded like the soundtrack to a Baliwood film), with Reissa asking the question first in a delicate Yiddish verse, then powerful, angry English. The song was a narrative from the perspective of one hunted by the wicked Nazis. Then, just a second or two short of 58:00 into the video, another dark song, this time in a slow tempo, with a sad feel. “Hard-working women,” sang Reissa, then something in Yiddish, “Women who labor, in factories and homes…” it was powerful imagery of the struggle of women in Nazi or Communist-occupied Europe. Of the struggle for women’s suffrage throughout the history of the United States and all over the so-called, ‘free-world.’

It was a great streaming concert, a sweet event of Jewish klezmer music with a splash of modernity and sexiness which makes this music kosher to the pluralistic masses (meaning not just Jews), well worth the price of a donation. Be on the lookout for more from the prolific master, Sir Frank London.

About the Author
Scott (Shlomo) J. Krane has been blogging for ToI since 2012. His writing has also appeared in The Atlantic, Tablet, Ha'aretz, The Jerusalem Post and the Daily Caller, among others. He was a columnist and breaking news editor for Arutz Sheva (2011-2013). In addition to holding a degree in Judaic Studies and a Master's in English from Bar-Ilan University (for which he wrote his thesis on the poetry of American master, John Ashbery), he has learned Judaism at Macon Ha'Gavuah L'Torah in Israel and Hadar Ha'Torah Rabbinical Seminary in Brooklyn.
Related Topics
Related Posts
Comments