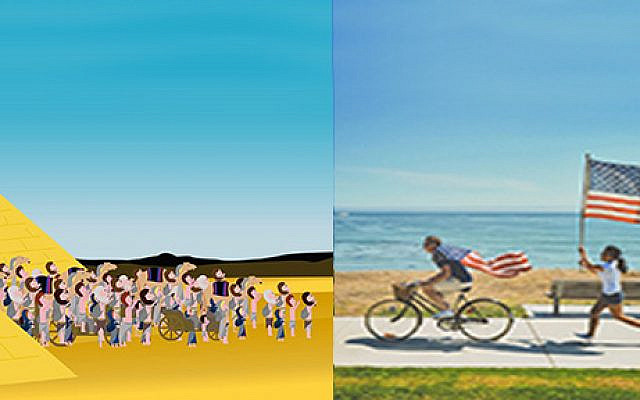 RUNNING TO THE PASSOVER SEDER *Images Courtesy of Alephbeta and Dreamstime

One would expect to prepare for Passover by reading new Haggadot published every year or delving into Shabbat HaGadol Drashas, but life often presents, albeit surprisingly, new opportunities for reflection and timely relevance. For me, such was listening to John Steinbeck’s book, Travels with Charley in Search of America. In an unexpected way, it was for me a new opportunity to connect to and appreciate the upcoming holiday. The book was recommended by a childhood friend and having to travel for many hours in the week preceding Passover, I took it to keep me company.

Steinbeck’s story captivated me for many hours, and I felt a shared fate as I listened to his experiences in the backroads of America, while driving similar country roads. His poetic, travelogue-style descriptions stand out in real detail; but what stayed with me most was Steinbeck’s longing for the lost ways of his old country that were slowly disappearing.

As I considered his yearning for his roots, I was preparing for a holiday where we are about to recall and celebrate our nation’s millennia-old traditions, maybe the oldest roots anybody can claim. When Steinbeck mourns the loss of local language and dialects, repackaged in uniformity by radio and television, we will recite Aramaic pages in our Haggadah, expressions recited by Jews over generations. While Steinbeck bemoans the industrialization of our food, we eat matza and repeat rituals that have survived intact for over millennia. In fact, the Passover Seder may be the oldest known ritual in western civilization.

Recalling our sense of history, I am reminded of the speech Israel’s first Prime Minister, David Ben-Gurion, delivered in 1947 before the UN:

“300 years ago, the Mayflower landed on Plymouth Rock. (It) was one of the great historical events in the history of America. But I would like to ask the Americans: do they know what date the Mayflower left port in England? How many people were on the boat? Who were their leaders? What kind of food did they eat on the boat? More than 3300 years ago, long before the Mayflower, our people left Egypt, and every Jew in the world, wherever he is, knows what day they left. And he knows what food they ate. And we still eat that food on every anniversary. And we know who our leader was. And we sit down and tell the story to our children and grandchildren to guarantee it will never be forgotten. And we repeat our two slogans: ‘Now we may be enslaved, but next year, we’ll be a free people. Now we’re scattered throughout the world, but next year, we’ll be in Jerusalem’. There’ll come a day that we’ll come home to Zion, to the Land of Israel. That is the nature of the Jewish people.”

I was contemplating the difference between Steinbeck’s disappearing America and my people’s sense of history and, as often happens amidst such a schism, I ask myself, what do I learn from this? Since I don’t believe in coincidence, I wonder, why did this come my way – why now?!

I have not always been a traditionalist. Having been raised secular, I’ve spent far too many years being anti-authoritarian, which often expressed itself at Passover-like occasions where I would argue over different customs: Why do this? or Why can’t we eat this or that?!

Over the years I’ve mellowed somewhat, and one could say I follow most traditions. Still, I realize there is much to learn from these divergent observations, where a person’s sense of freedom can swing between celebrating their link to old traditions, or the opposite — being free from their limitations.

For one, finding a continuum between ourselves and our parents, great grandparents and ancestors, going back thousands of years to some authentic or original experience, is the ultimate way to connect with our roots. But then I ask myself: What do these roots add to my life? And if they do not, why have them?

Why celebrate traditions and events that are so far from our experience when, in fact, we can rejoice in newfound miracles: the ending of this pandemic — hopefully, and the birth and safety of our growing Jewish state! There’re so many things to commemorate, why connect to some mythological event thousands of years old which we cannot ascertain and hardly imagine?

I’m no anthropologist and cannot give any definite answer, but as an observant Jew, my reaction is clear: ‘Cause G-d said so! Because the Torah outlines this tradition, and honoring our freedom links the memory of our collective experience, inspires our kids and teaches them what it means to belong. ‘Cause this is how we memorialize becoming the nation we are today, struggling to stay connected for over three millennia.’

Moreover, if there’s something I’ve learned in life, it’s that freedom is not defined by the absence of burdens, or people would stay home and drink their beer all day long. Freedom must be earned and paid for, often through heavy sacrifices.

My father fought for such freedom when he sat in jail, a reprisal for his resolve to emigrate from behind the Soviet Iron Curtain and bring his family to Israel. Our Pharaoh may have had a different name, but our goal was not much different. In the process we lost our mother, suffered cold winters and hungry nights, and eventually we earned our right to enter the Promised Land. So, for me this is not an old, irrelevant mythology but a painful, all too real, truth, living a tradition worth fighting for. I lived through a private Exodus, realizing that the privilege of living as free people has cost my family a great deal, and I must help my kids learn my story and the story of our people. In passing the torch, from one generation to the next, we cement our roots, our identity, and ensure our continuity. And if one asks what is the value of roots? I would reply that without a past there’s no future. Such are the powers of roots; they help us form our identity.

John Steinbeck may reminisce about the old America of his youth, yet it seems to me there is no remedy for his loss. As an American Jew, I celebrate Thanksgiving and appreciate the religious freedom this country offers, but eating turkey and watching football on TV, does not reconcile the gap between this generation and his own. In contrast, we Jews are given a way to ensure our own story, our freedom, and our sacrifice for such freedom, will be remembered and commemorated ad infinitum.

This holiday is built around the commandment of ‘‘והיגדת לבניך”, teaching our children and passing our tradition along. May we ensure there’s no gap in such transmission, for once a car is detached from the engine that pushes our nation forward, it may never get back on track. Thus, I leave Steinbeck’s book behind and rush home to start preparation for our family’s Seder.