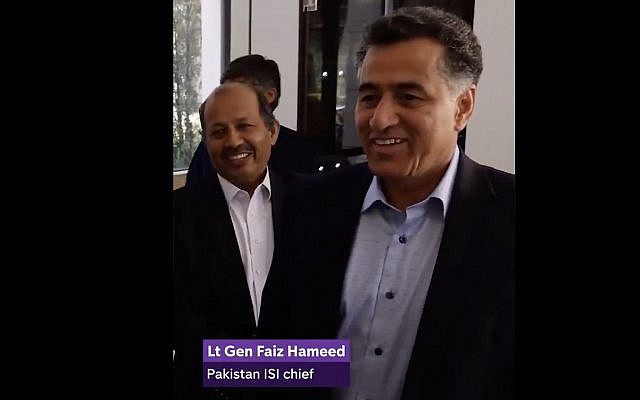 On November 12, 2022, Al-Aqsa Call YouTube channel published a video of Gaza-based Hizb-ut-Tahrir-affiliated preacher Nabil Al-Halabi giving a Friday sermon in which he criticized the recent visit of Pope Francis to Bahrain as part of the “Bahrain Dialogue Forum: East and West for Human Coexistence,” saying that such dialogues are organized within the context of the US-led campaign against Islam and Muslims. In the sermon, Al-Halabi accused Muslim clerics and scholars who participate in such dialogues of abandoning the concepts of reinstating the Caliphate, waging jihad, and Hudoud (i.e., the Islamic penal code).

Earlier in June, Nidhal Siam at Al Aqsa called Hindus “filthy cow worshipers,” and exhorted Pakistani Muslims to attack Indians on the border. Siam said during a gathering at the Al Aqsa mosque in Palestine that the only response to the “Cow-Worshiping” Hindus against the Prophet Muhammad is to declare Jihad to destroy them.

Palestinian Islamic Scholar Nidhal Siam at Al-Aqsa Mosque Rally: The Only Response to the “Cow-Worshipping” Hindus’ Affront to the Prophet Muhammad is to Declare Jihad to Eradicate Them #India #Palestinians #aqsa pic.twitter.com/teF5vermHn

It seems that extremist terrorist propaganda now starts in Gaza and ends in Pakistan. In a surprising and un-diplomatic incident, replying to the Indian Foreign Minister Jaishankar’s comments on Pakistan’s sheltering of Osama bin Laden, Pakistan’s young foreign minister used rather harsh language against the Indian Prime Minister. Despite the bravado, Pakistan is getting increasingly beaten by its key terrorist proxy, the Taliban and its allies like Tehreek-e-Taliban Pakistan (TTP) and Pakistan’s civilian leaders are now searching for neighbouring countries to blame.

Bilawal’s recent statements against India are typical narrative that Pakistan has stuck to in an effort to  hide its long association with terrorism and terrorist groups like the Afghan Taliban. Bilawal, whose mother Benazir Bhutto was a victim of terrorist violence,  is aware of Pakistan’s policy of `strategy`–using terrorism as a
weapon of foreign policy.

Pakistan’s support of the Taliban is now putting Pakistan’s democracy and security at risk. The concept that Pakistan peddled to NATO and its allies for years of `good Taliban bad Taliban`,  has now been proved to be a pure fairytale. The recent cases of beheading of a policeman, laying a siege on a Counter-Terrorism Department and its officials in Bannu, besides the intermittent border firing are all examples of the invention turning against the inventor.

Pakistan has been training, arming and aiding the Taliban for over three
decades in its various madrasas and terrorist training camps. A hurried US withdrawal from Afghanistan, Pakistan finally felt it had reached its objective of strategic depth and control of the country and aided the Taliban in its final push to set up a government in Kabul. The jubilation in Pakistan was overwhelming, having bested the most powerful nation in the world. The then ISI chief, Lt. General Faiz Hameed, strutted around Kabul, a true king-maker, having brokered an agreement of power-sharing between the factions of the Afghan taliban and the Haqqani network which was is more loyal to Pakistan. Imran Khan, who was then the Prime Minister, hailed it as a `win for Pakistan`.

But as events turned out, the jubilation was short-lived. The Taliban once in power, started playing hardball with Pakistan–keeping it hanging on promises of reigning in an emboldened TTP which began to launch attacks in the border areas of Pakistan to retrieve its lost ground and the dream of a united homeland for Pashtuns. The army, instead of taking on a terrorist group headlong like it did in the previous years, decided to sue for truce. It was General Qamar Javed Bajwa’s colossal failure to having trusted the Taliban and not having cultivated leverage.

The TTP recovered much faster than the Pakistani army had expected while the Taliban used Pakistan’s strategy against Islamabad– patronage, denial and deceit.

Now the big question, for Bilawal Bhutto and other policy makers in Pakistan, is how
did the army, the creator of the Taliban, miss the big picture. Bajwa was too preoccupied with politics to pay attention to a clear threat to Pakistan’s territorial integrity. But why did it take a fortnight for the new chief, General Asim Munir, to find himself in a situation where the terrorists are now dictating the game. The army has to accept, as Pakistan’s former Ambassador to the US Dr Maleeha Lodhi, recently wrote that “the present Pakistan policy is now untenable“. A former Senator and Pashtun leader, Afrasiab Khattak put it more bluntly:“ Project Taliban will keep eating into the vitals of peace, security and economy of the country…The addiction to remain a “front-line-state” is an existential threat.“

Pakistan’s democracy is under threat and Bilawal Bhutto and other civilian leaders must find a solution to protect Pakistan and South Asia before its too late.