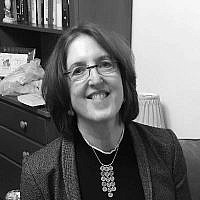 The Blogs
Lonye Debra Rasch
Medical News Chair, Hadassah Medical Organization
Apply for a Blog
Advertisement
Please note that the posts on The Blogs are contributed by third parties. The opinions, facts and any media content in them are presented solely by the authors, and neither The Times of Israel nor its partners assume any responsibility for them. Please contact us in case of abuse. In case of abuse,
Report this post. So much news comes our way every day that often I find it difficult to remember what I’ve read the day before. Yet, I can’t stop thinking about Entrata, the Utah software startup that was catapulted into the media in January because of a horrific antisemitic email that its now ousted chairman David Bateman sent to both colleagues in the tech world and other Utah businessmen and political leaders. Bateman claimed that the COVID-19 vaccine is part of a plot by the Jews to exterminate fellow Americans. I keep asking myself, “Did he really believe what he wrote—that the vaccine is part of ‘a sadistic effort to euthanize the American people?’”

It’s so hard to wrap my brain around this guy’s irrational thought pattern. After all, he is the founder of what appears to be a stable, remarkably successful company selling “smarter property management software.” In 2021, according to Forbes Magazine, Entrata was worth over one billion dollars!

But I did not set out to write this blog to rehash the specifics of Bateman’s antisemitism or the heights to which he brought his company. I chose to write this blog because I was captivated by the humanity that the Entrata board members and Chief Executive Officer Adam Edmunds demonstrated in the face of this antisemitism by the man at their helm. You may recall that they immediately forced Bateman to resign as chair of the board and to divest himself of any financial holdings in the company. But they went so far beyond these more typical responses that their subsequent actions continue to mesmerize me. Edmunds and the other board members clearly felt a deep need to delve into what happened, to ask why, to make amends and to fortify their employees to become allies in the fight against antisemitism.

Did you know that they contacted Rabbi Samuel Spector of Salt Lake City’s Congregation Kol Ami and asked for a meeting with him, so he could help them understand the roots of antisemitism and the various current-day accusations triggered by it?

At that meeting on January 8th, Edmunds and the other Entrata board members, some in tears, received an education about the antisemitism that has persisted through the centuries. But for Edmunds, becoming educated was not enough. He wanted to do something for the Jewish people in the community, and so he asked Rabbi Spector what the synagogue needed most. As Rabbi Spector informed The Forward, he told Edmunds that their building was in need of many repairs. And Mr. Edmunds responded, “We’re going to take care of all that for you.” Rabbi Spector added, “and they made the largest donation we’ve ever seen.” The gift translated into a six-figure contribution!

As I read those words, I sensed my mouth fall open in disbelief. I stopped breathing for a few moments, as I absorbed the depth of this so very meaningful gesture. With all the angst we rightly feel about the rise in antisemitism, don’t we need to pause to appreciate what these Entrata board members did—and to be uplifted by their soulful response to antisemitism in their own ranks? Shouldn’t we be encouraged that the Entrata board asked Rabbi Spector to speak about antisemitism and its historical roots to their employees, both in the United States and India? And already, by January 14, The Salt Lake Tribune reported that Rabbi Spector held an online workshop with the company’s employees during which he explained how people can recognize and fight antisemitism.

Rabbi Spector reported that “nearly 1,000 employees tuned in, and the presentation was recorded so that the others could watch it later.” He noted that many of the questions he received during his presentation asked how one went about becoming a better ally.

As a long-time volunteer leader of Hadassah, The Women’s Zionist Organization of America, I am enormously proud of our advocacy to counter antisemitism in its latest incarnations. I am proud of our leading role in advocating for the passage of The Never Again Education Act, whose goal is to ensure that the Holocaust and its lessons are part of the curriculum in our children’s schools. Hadassah’s discussion group kit Antisemitism: Define It. Defuse It is a wonderful tool for our grassroots leaders and members to respond to antisemitic tropes. But as we all remain vigilant and reactive to antisemitism in all its guises, I also ask that we balance this vigilance with optimism, as we remember the people at the helm of Entrata. We have allies whose humanity should not slip from our consciousness.

Lest you view me as a Pollyanna, you should know that I realize one can take a more cynical approach and assume that the people at the helm of Entrata just took these steps to ensure that its founder’s actions wouldn’t hurt the company’s bottom line. But my intuition tells me that a cynical approach is inappropriate in this situation.

Ask yourself, “Have I ever seen a company step up to this extent with an apology that carried so much substance?” They didn’t just ask their chairperson to resign; they didn’t just disavow his views. They took the time to understand how such virulent antisemitism could occur within their company and countered it with a gift to their local Jewish community. Of course, the financial donation can’t destroy the memory of what happened for any of us, but it will help the local Jewish community repair their synagogue and one of its Torah scrolls, as they struggle to move past the pain of Bateman’s insidious accusations.

That is what I want to remember most from the Entrata saga.

I also will remember the interview of Edmunds I found online. It was from about six months ago, when he had recently become the new CEO of Entrata. While talking about the various start-ups he had founded and the Silicon Slopes community he is part of, I was surprised to hear him state that he and the other entrepreneurs are all “stewards of their community.” It is their task, he said, to “give Utah a good face” and to ensure that “everyone is winning.” He added, “I am a big fan of the idea that if you put good energy out into the universe, it will come back to you.” It certainly seems that Edmunds is true to his word.

About the Author
Lonye Debra Rasch, from Short Hills, NJ, and New York City, is currently Hadassah Medical Organization (HMO) Medical News Chair, writing and editing news articles and stories for the Hadassah websites (www.hadassah.org) and www.hadassahinternational.org) about healing, teaching and research at Hadassah’s two hospitals in Jerusalem. She is the Past President of Hadassah Northern New Jersey. Having spent her professional writing and editing career specializing in health care and psychology, she now is a volunteer full time. Married to an international attorney, she is the mother of two daughters and the grandmother of three small children. Aside from her volunteer work, she is a big advocate of practicing yoga, being a member of a book club group with smart, kind women, and spending time laughing and sharing life’s little sagas with family and friends.
Related Topics
Related Posts
Comments