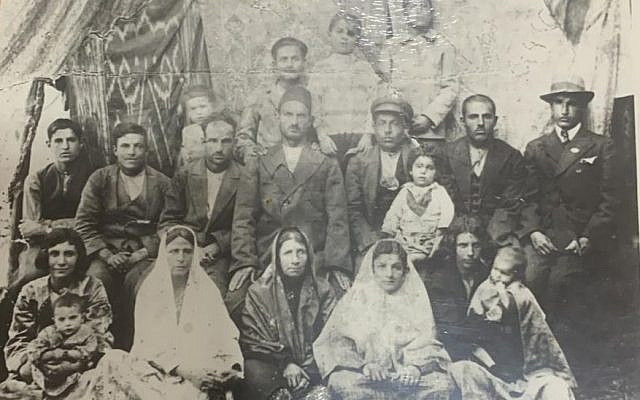 A picture of my paternal grandfather when he was seven years old with his parents, grandparents (my great and great-great grandparents), and other family members in a Sukkah in Isfahan, Iran in 1932.

“Isfahan Nesfe Jahan” – “Isfahan is Half the World.”

This was a saying I often heard growing up in America. It is a saying in Farsi by many people from Isfahan, an ancient city in Iran. Isfahan is where my roots come from on both sides of my family for at least the past few centuries. Unfortunately, however, not many people in Israel or the West know about Isfahni Jewish culture or history. So to honor my family’s legacy and in honor of both Mizrahi Heritage Month and the day to commemorate the Jewish exodus from Arab countries and Iran today, I decided to write this article telling my family’s story.

For some background, I am the first generation in my family in over 2,500 years to be born outside of the Persian region. We can trace our roots to Iran all the way back to the time of Cyrus the Great when he freed the Jews from captivity in Babylon. Some decided to return to the Land of Israel, but many Jews, including my family, decided to stay in the Persian Empire until the Iranian Revolution in 1979.

Again, my family – on both my mother’s and father’s side – can trace their roots more specifically to Isfahan. My mother was born and raised in the city and my dad – though born in the Iranian capital of Tehran – was raised culturally Isfahni, as he was the first generation on his side of the family to be born outside of Isfahan in at least 13 generations.

Indeed, Isfahnis, as they are referred to, have a unique culture among Iranians, even for Isfahni Jews.

“They are practical as well as artistic” my mom told me.

Isfahnis are known to be perfectionists and have a passion for art. This is shown in the designs of their carpets, mosques, and other architecture, some of which many consider to be the most beautiful in the world. The beauty and perfection of their architecture is one of the reasons why Isfahan is often referred to as half the world, Nesfe Jahan, because it has so many beautiful things it can be considered to have half of the world’s best things on its own.

Isfahnis also have a distinct accent. There have been multiple times when I was speaking Farsi with native Iranians and they pointed out that I must be Isfahni just by the way I said, I am fine: “Man khobam” as opposed to “khubam.”

The city also has a rich Jewish history that is intertwined with its Persian history. Isfahan had such a large Jewish community even from its early years that it was referred to by many as Yehudei and still became the capital of the Islamic Safavid Dynasty.

Its Jewish community also knew how to live in peace with their non-Jewish neighbors while keeping their Jewish culture and rituals. My mom told me how she had many close friendships with Muslims in Isfahan while practicing her Jewish rituals at home. My paternal grandmother would even tell me stories about how every Friday afternoon she was the only Jewish girl going through the local Muslim market to buy bread for Shabbat dinner and did not have any problems.

Nevertheless, despite my family’s proud Iranian heritage and friendly relations with their Muslim neighbors, they did sometimes face anti-Semitism during their daily life. For instance, my mom said before she could pick out something at the local grocery store, the owner would yell at her, “Das nazar! Nejest mished!”, which is an Iranian Muslim slang telling Jews not to touch something or else it would become tainted.

My paternal grandparents also experienced anti-Semitism in Isfahan. Like many Jews in modern history, they lived in the Jewish ghetto known as Mahaleh where they were segregated from the rest of the city and were often harassed whenever they left their neighborhood. My grandfather was beaten up by his classmates at school when they found out he was Jewish, and my grandmother was once assaulted on her way home from school just because she was Jewish.

Indeed, my family did not always feel welcome or safe as Jews in Iran – and that feeling of insecurity was one of the reasons why Zionism and the State of Israel were also important to them as Iranian Jews.

My parents always told me that Israel and Zionism helped them feel safe because they knew they had somewhere to flee if they had to.

“We were proud to be Persians,” my mom said, “but…having Israel…we knew we would be safe if anything happens.”

My late father also once said that they would listen to the radio every day during the Yom Kippur War in 1973, hoping not to hear that their safe haven was destroyed, as they would need that haven just a few years later.

Israel and Zionism came to my family’s rescue during the Islamic Revolution after 1979. Again, while my family members were – and still are – proud Persians and there still are some Jews living in Iran today, seeing an Islamist like Ruhollah Khomeini – the leader of the revolution – coming to power made them feel that they had to run.

My parents were studying abroad in America at the time of the revolution, but many other Iranians Jews, including some of my other family members, were not as lucky. Many found themselves in Iran in the middle and even after the revolution. Some of them lost their property in the process and had to flee across the border where they would go to Israel next, but the journey was not easy. Many Iranian Jews had to travel across the border with little more than the “clothes on their backs” and sometimes even needed to ride on donkeys.

Indeed, my family’s displacement from Iran was traumatic on many levels, but there may have been a silver lining. My uncle told me that it was a dream among Iranian Jews to one day see Zion in Jerusalem, as they considered Israel their ancestral home too. And as traumatic as their exodus from Iran was, it led many of them to finally see Zion and many of them have created – and will continue to create – fond memories in the Land of Israel too.

Again, many Isfahnis would call their home half the world, but, for Isfahni Jews, perhaps Jerusalem is the other half. It was, after all, a dream of my grandparents – who were born and raised in Isfahan – to one day see Zion and now they are resting together in peace in Jerusalem – the other half of the world.

About the Author
Jonah Naghi is a Boston-based writer and the Chair of Israel Policy Forum's IPF Atid Steering Committee in the city of Boston. A frequent commentator on Israeli-Palestinian and US-Israel affairs, Jonah has spent extensive time in the region and received his Masters in Social Work at Boston College (2020) and LCSW (2021). All the views expressed are his own.
Related Topics
Related Posts
Jonah Naghi