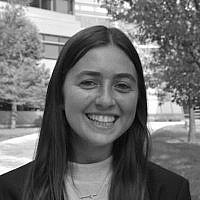 The Blogs
Mia Raskin
Apply for a Blog
Advertisement
Please note that the posts on The Blogs are contributed by third parties. The opinions, facts and any media content in them are presented solely by the authors, and neither The Times of Israel nor its partners assume any responsibility for them. Please contact us in case of abuse. In case of abuse,
Report this post. 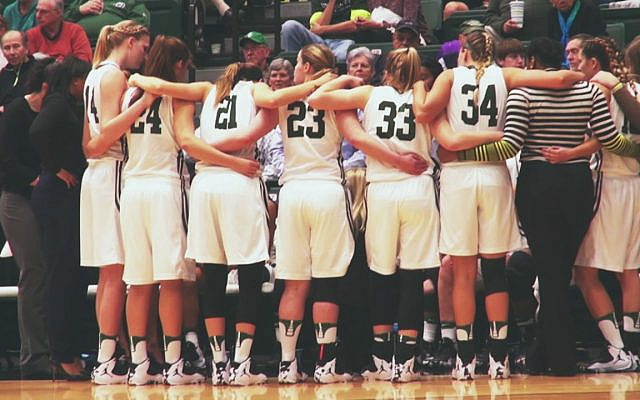 On Friday, December 31st, I was walking to a local Starbucks with an old high school friend when my phone buzzed from a caller I would never have expected to hear from. Coach Bethann Shapiro Ord and her coaching staff were calling to give me the opportunity to help the Binghamton Women’s Basketball Team. I had already been assisting them as a manager, but due to multiple team member injuries and COVID precautions, they asked me to step into a new role.

Throughout high school, I was a committed and passionate basketball player; I played year-round for Berman Hebrew Academy, AAU, summer programs, and more! I prioritized basketball almost over everything else. When it came time to decide where I would attend university, I concluded that the only thing I valued over basketball was Jewish observance and a strong and supportive Jewish community. Ultimately, there were no college basketball programs flexible enough to accommodate my Shabbat observance, kashrut requirements, and Jewish communal needs, so I decided collegiate basketball would not be in the cards for me. I volunteered as a manager because I could not stay away from the game I loved. Being in that position was rewarding, but also paved the way for this new opportunity.

You can only imagine my initial reaction to Coach Ord’s phone call — I was ecstatic! I finally felt like I would be able to live out my basketball dreams. However, as we began speaking more and more about the details, I couldn’t help but wonder about the team and coaching staff’s reaction to all my religious restrictions and the accommodations they would require.

Fast forward almost a month later… I am still a frum Jew, AND I am living out my basketball dreams. The truth is I am even prouder of my Jewish identity now than ever before, and I am playing the game I love most. This past month has been filled with growth and learning opportunities. As I’ve reflected on my journey to this point, there are five central life lessons that I have digested as I continue on this once-in-a-lifetime opportunity.

Everyone Has a Story

On my first Shabbat back at Binghamton, we had a game scheduled for 2:00 p.m. on Saturday afternoon. I had previously decided that for any home games scheduled on Shabbat, I would walk to the arena even in the freezing cold weather. Although I would be compromising my ideal Shabbat environment, I would be able to fully participate and contribute to my team.

However, not yet knowing the girls on the team, I was anxious about what it would look like spending a full day in the Events Center just hanging around waiting for the game to start. During the hours leading up to the game, I realized that everyone has a story.

Not just any story though. As I sat in the locker room, we asked each other questions and listened intently to one another. Every girl on the team compromised certain aspects of their lives to get to where they are now: their family commitments, taking on financial burdens, juggling religious obstacles, social strains, and the list goes on and on… It was truly incredible to hear the discipline in lifestyle and values in each and every girl that led to them deserving a spot on the roster. No matter the journey, it became extremely apparent that we all came together for one united purpose.

Being a Division I Athlete Isn’t “Easy”

This is probably the biggest misconception of the game. Being a D1 athlete has become so romanticized that most people forget that the label is not as easy as it seems. There are daily physical and mental strains that most people never see. Your body takes a beating, as you relentlessly work to maintain muscles and stamina for optimal performance. Simply put, the conditioning is thoroughly exhausting. Mentally, there is also a ton of pressure. Athletes are not given enough of a voice in the mental health world because, stereotypically, athletes are depicted as ideal mind-body specimens. Spoiler alert… athletes are human, and humans are complicated.

Whoever said that being a D1 athlete is easy should try working a part-time job, going to school full time, and training for three hours a day, putting their mind, body and lifestyle on the line. The effort, time and physical/mental exertion cannot be ignored or brushed aside.

The Jewish Community Is the Strongest Fan Base

In the first game of the semester, who were the only fans in the student section? The Jewish community. (Granted, it’s an issue that at a school with 16,000 students there is a lack of student representation in attendance, but that’s for a different reflection article).

There is a song that goes, “Wherever you go, there’s always someone Jewish… You’re never alone when you see there’s a Jew.” At the game on Wednesday, January 26th, I did not feel alone. Instead, I felt an overwhelming amount of support from the Binghamton Jewish community.

Judaism Is Only a Hurdle If You Make It One

During my gap year in Israel, one of my teachers taught me that aspects of Judaism are often viewed as rules and regulations when really they are tools to living a meaningful lifestyle. I never thought that I would sit with Coach Ord and the other staff and give a detailed rundown about the laws of keeping kosher and Shabbat. I never thought that I would host the whole women’s basketball team for a traditional Shabbat dinner at my off-campus apartment. I never thought that I could make it work past high school. Not only do I feel that in the past month I have made it work, but I feel prouder, stronger, and more passionate about my Judaism than ever!

I would not feel this way if I had not been both welcomed and challenged by the team in the ways that I was. I have been asked some amazing questions over the course of the past four weeks that have helped me think through the reasons for why I do what I do. What I am most grateful for are my teammates for never being afraid to ask.

Everyone Has a Role That Is Necessary to Succeed

When I got the call from Coach Ord, I didn’t really know what I was signing up for. I knew the girls’ names and faces from being one of their managers, but I didn’t know what their reaction would be when they saw a random Jewish girl from Potomac, Maryland show up. I knew I was coming to play basketball and to be a part of something bigger, but I was not sure exactly where it would lead me.

I view a team as one big puzzle. There’s a spot for everyone, and it’s about finding where you fit in and what role you are going to fill. I believe the coaching staff and players truly epitomize this, and for good reason. Seven injuries later, a once 15 healthy-person roster turned into eight plus a winter break walk-on, and now everyone is finding their own unique way to contribute to the team despite the setbacks and unconventional circumstances. Whether it’s scoring or rebounding, cheering from the bench and motivating teammates during a time-out, every person is necessary and valued in order to succeed as a team. Phil Jackson, former head coach of the four-time NBA Finals Chicago Bulls team, said it best: “The strength of the team is each individual member. The strength of each member is the team.” In a world that is so deeply divided, one common love of basketball can unite so many diverse people to respect and inspire each other to accomplish incredible things.

The game of basketball is more than just two teams trying to score more baskets with an orange ball – it’s a lifestyle that bonds people. The values of this sport are as crucial to remember off the court and on the court. Everyone has a story and a way to contribute, and for me personally, my Jewish identity is my story. I hope to continue to share my love for the game with others, but also share my love for the Jewish people and the Torah. Basketball and Judaism are not irreconcilable. Rather, they are both equally important counterparts to my success and happiness. Both continue to push me in remarkable ways, both help me discover myself and make me feel the most accomplished. I feel that this opportunity to play for Binghamton’s basketball team was not only for myself, but there is a higher purpose of being able to spread my Jewish culture and tradition, to break the bonds of unfortunate stereotypes, and to invite people to become more educated about my religious traditions.

At the end of the day, I don’t know what’s in store for me following this season and beyond. But what I do know is being a part of this Bearcat Women’s Basketball team is something so incredibly special and I will never take it for granted. The friendships, challenges, accomplishments, and overall experiences are some that I will continue to cherish throughout my entire life.

Don’t underestimate the Binghamton Bearcats because this squad is stacking bricks and building to achieve big things. The sky’s the limit, so come out and support, tune in and be a part of the experience with me!

About the Author
Mia Raskin is originally from Potomac, Maryland, and a graduate of the Berman Hebrew Academy. Mia is currently a marketing major in the Binghamton University School of Management. She serves as an officer in her business professional fraternity, Alpha Kappa Psi. Prior to attending university, Mia spent a year learning at Midreshet Torah V'Avodah in Jerusalem. Mia is actively involved in the campus Jewish community. She is a past student president of OU-JLIC and a leader in the BU Zionist Organization. Mia is currently on the Division I basketball team at Binghamton.
Related Topics
Related Posts
Comments