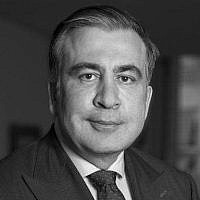 The Blogs
Mikheil Saakashvili
Apply for a Blog
Advertisement
Please note that the posts on The Blogs are contributed by third parties. The opinions, facts and any media content in them are presented solely by the authors, and neither The Times of Israel nor its partners assume any responsibility for them. Please contact us in case of abuse. In case of abuse,
Report this post.

I’m writing this article from a prison cell in Tbilisi, Georgia, the country I’ve helped to recreate from a failed territory to a modern functioning state, according to the assessment of all, even the most critical but objective experts.

During my two consecutive terms as president, Georgia’s economy has almost quadrupled, poverty was reduced 2.5 times. We became the world’s number-one economic reformer according to the World Bank’s ease of doing business index and rising from position 127 to 8.

We were also doing well on transparency international ratings, becoming one of the best fighters against corruption worldwide and a role model for the entire region. All this despite a full-blown Russian invasion in 2008 and the world economy crisis.

After losing parliamentary elections in 2012 to the Russian-bred oligarch Bidzina Ivanishvili, we did the region’s first peaceful transfer of power, which was both smooth and without my hesitation.

As a result, then vice-president Biden and Senator Dick? Rick? complimented me by calling me “George Washington of Georgia.”

Unfortunately, that transfer of power turned out to be the last as elections became increasingly poorer in standards, with the ruling Georgian Dream Party compensating for the drop in its support by voter intimidation and outright bribing, which according to the US embassy in Tbilisi raised doubts about the overall “fairness of the elections…the abuse is fully incompatible with Georgia’s ideals.”

For the years after my second term has expired, I tried to stay away from Georgia and was invited by Ukraine’s reform-minded president Zelensky to chair the National Reform Council under him.

The Reform Council helped to draft important laws like the law on land reform privatization and have been recently tasked by the president to prepare Ukraine’s revolutionary Economic Freedom Support Act.

But once I saw Georgia’s democracy deteriorating almost beyond repair, I decided to go to the country from the safety of my Kyiv home knowing that there was a high risk of arrest on the charges that no country in the world recognizes besides Georgia and Russia. Interpol refused to even consider the Georgian request and I keep touring the world meeting world leaders and multiple politicians who regularly invite me for international meetings and conferences.

But now I’m here in my solitary confinement cell on a hunger strike in a country that only formally has a judiciary, government and president but as everyone knows is fully controlled by an oligarch that appoints and fires government at his will, orders arrests and detention – a typical picture of state capture.

I’m appealing for help, but not for myself, but for a Georgian democracy, by taking this desperate step of coming and turning myself in. I wanted both to express solidarity to my suffering nation and awaken the conscience of the world.

I know it is one problem too many for you out there but there is still a chance to save a once very successful aspiring small democracy that is very close to failing for good.

About the Author
Mikheil Saakashvili was the third president of Georgia for two consecutive terms from January 2004 to November 2013. He is the founder and former chairman of the United National Movement party and heads the Executive Committee of Ukraine's National Reform Council. Saakashvili was arrested on October 1, 2021, when he returned to Georgia.
Comments