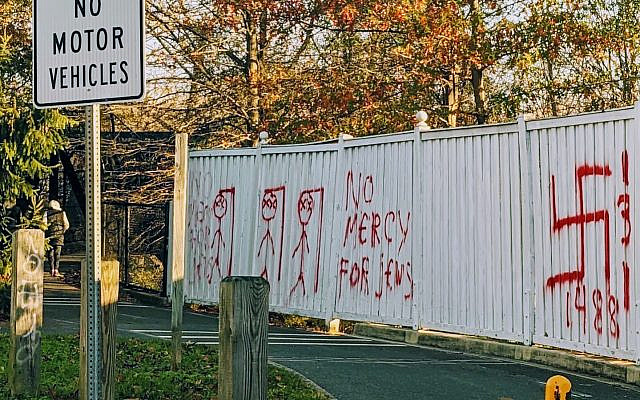 Laura Rosenberg Hosid had just dropped off her children at their Jewish day school and was meeting a friend from an Israel trip for what they thought would be a nice walk along the Bethesda Trolley Trail, an otherwise four mile quaint, tree-lined walking trail. Instead of a friendly and relaxing walk, they ran into this horrifying neo-Nazi display of hatred toward Jews.

Along the path, there was spray-painted graffiti of three gallows, where Jews were presumably being hung, and the ominous words:

NO MERCY FOR JEWS

At the far right end was their “signature,” with the Nazi swastika and the codes 131 and 1488. The 131 is the National Socialist Club (NSC) 131, a neo-Nazi group based in New England. And 1488 is a combination of two white supremacist hate symbols: The first two numbers are code for their 14-word slogan:

We must secure the existence of our people and a future for white children.

The second pair of numbers, 88, stands for Heil Hitler (since H is the 8th letter of the alphabet).

I asked Laura about her experience, and she said:

I was obviously horrified to see it, and wonder how many people had already walked by it yesterday morning without doing anything. But even more disturbing is when I called the county to report it, the person who answered the phone told me it was not a police matter because it is free speech, and I should contact the Parks Department about having it cleaned up. Obviously he was wrong, and the police have since been investigating!

While I am sure we can all appreciate the protection of free speech under the First Amendment, certain things may be considered not protected, such as incitement, threats of serious bodily harm, and “fighting words.” I’ll leave it to the legal experts to figure out the technicalities of all this and how it applies to various situations.

What is striking to me is that when it comes to hate against the Jews as opposed to hate against other groups, we continually see that “their” rights are immediately supported, while we have to prove that it’s really hate.

It doesn’t take much imagination to think about what would happen if, instead of Jews, any of a number of other minorities were being targeted here. There could be anger, demonstrations, and even different levels of chaos in our cities and across the country.

Unfortunately, while there will be some people who always hate on others, we need to carefully monitor for when words spill over into deeds of hate, discrimination, intimidation, and violence. As the amount of verbal hate goes up, it is only common sense that these other ugly displays of racism will soon follow.

Hopefully, our community leaders, police, FBI, and Homeland Security are paying close attention and will take appropriate preventive action so that we can avoid another incident like the shooting just four years ago at the Tree of Life Synagogue in Pittsburgh. We need more intelligence, surveillance, officers, patrols, data-driven policing, self-defense and emergency medical training, synagogue protection, community outreach, beefed-up reporting systems, and tougher penalties to start with. We can’t expect the people who hate to stop, but we do need to keep raising the bar on how to keep our communities safe and stop hate crimes.

Laura’s experience is a lesson that we can’t just rely on others to sympathize with us, and even if they do, so what?

Israel has the right idea that “Never Again” requires a strong practical legal response and not just passive complaining about hate.