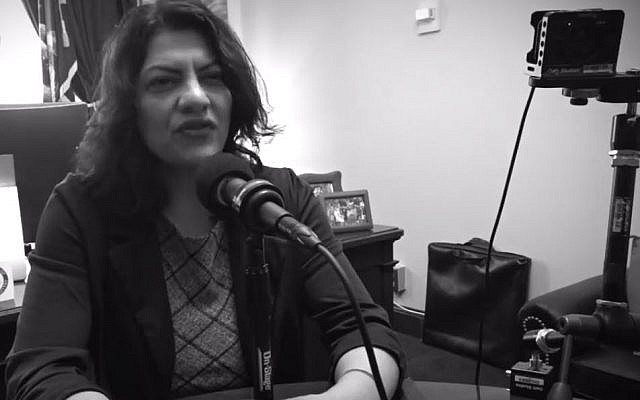 Did you misunderstand Rashida Tlaib when she said she “gets a calming feeling” when thinking about the Holocaust? I did, until I watched her interview.
If she truly meant she gets some ghoulish peace reflecting on the murder of six million Jews and four million non Jews she’d be criminally insane.
That is NOT what she is saying, friends.
She’s playing Palestinian three card Monte and if you don’t get the game, you lose; misconstrue her and you’ve missed the verbal sleight of hand.
You’d miss the mark if you only saw the headline or even read all her remarks, or listened carefully to the audio.
It’s the video that tells the tale. The little smirk at 1:06 of the Yahoo! interview linked here is the knowing wink, the “tell” as card players call it. Palestinians, she opines, lost everything and “it was in the name of [Jews, not Palestinians] trying to create a safe haven for Jews…” So many have responded by reminding us of the historic hostility of the then Mufti of Jerusalem towards Jewish immigrants, which mirrored widespread Arab hostility and mass murder. Palestinians, they point out, never tried to “create a safe haven.”
Friends, there’s no need to re-educate Ms. Tlaib, she isn’t suggesting that. She is saying that Jews were trying to create a safe haven in Israel for themselves and as a result, the Naqba, “the Palestinian Tragedy,” occurred. If you don’t listen to the context of her comments, you’d miss that she couldn’t care one way or the other about the Holocaust, it’s someone else’s story. If you’d like to care deeply about it, I don’t think she would contest your right to your feelings. But as her twisted sister congresswoman Omar said recently about the bombing of the World Trade Center: “some people did something…” which led to discrimination against her people. It isn’t that she justifies it or even minimizes it. Both women only care about their own activism against a perception of victimhood that started, for Omar at 9-11, for Tlaib, after Israeli statehood. That is where life begins for her. History is so 15 minutes ago.
All she knows is she feels empowered by her claim to victimhood, a calming claim to self-righteousness that her ancestors “provided”… (and she clarifies) “AGAINST THEIR WILL.” She isn’t saying anything about their willingness to provide safe haven or not, she is commenting on their victimhood and the context it establishes, in her mind, for ignoring the outcomes of wars of genocide initiated by the Arab nations and their Palestinian enablers against Jews and their nation. Only her perception of victimhood remains, the Holocaust is over. Her manufactured notion of “coming from a place of love” is an incantation in the pursuit of “tearing down the apartheid wall” and, in essence, erasing the Jewish state, a lesson she claims to have learned from the US civil rights movement, that “separate but equal doesn’t work.” She is laying the groundwork for her trip this summer to the West Bank in pursuit of obfuscating history, to ignoring context and create a made-for-US-TV “town hall meeting” in a West Bank where intifadas, stabbings, bombings, rocket attacks, kidnappings, and murders will be whitewashed away.
Let us stipulate that some Palestinians did indeed lose their homes and lands against their will, or fled before and after the State was formed in fear for their families’ safety or as a result of real or perceived Israeli agitators. Yet as many stayed and are now free citizens of the State of Israel, serving in the army, industry, the Supreme Court and the Knesset. Palestinian Israelis make up 21% of the population of Israel proper.
I listened to the whole joyless interview, mostly an anti-Trump rant on the Yahoo Radio show “Skulduggery”, from a media land beyond my ken, peopled with carefully disheveled hosts dressed and drenched in populist hipster-ism. In the portion of the interview preceding her Holocaust “calming feeling” quote, Tlaib hit all the bumper sticker points that rational people could disagree on and would make my left leaning friends feel at home: “big Pharma, Bill Barr, Russian collusion.” Then as smooth as silk, she turns to her newly fashionable point that Jews caused her people’s misery and owe her oft-invoked grandmother restitution: it is both dulcet and dewy eyed. You are missing something if you think she credits her people with helping Jewish refugees to Israel and she’s happy you missed the point. You also missed that she smiles a lot, says “love” a lot. Indeed the title of this post “From Rashida With Love” is actually the title of the Yahoo news article. She’s really happy: victimhood has given her everything, a seat in the most powerful governmental body in the world. The Palestinian people’s misery is her meal ticket.
She doesn’t get a “calming feeling” from the Holocaust; frankly, my dear, she doesn’t give a damn.
About the Author
Steve Brown is a registered architect and has headed an architecture, environmental design, and construction firm in the Philadelphia, PA area since 1985, whose recent work includes several Net Zero Energy projects.
Related Topics
Related Posts
Comments