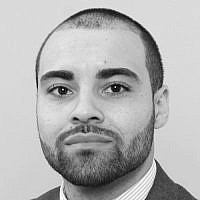 The Blogs
Adriel Kasonta
Tempus fugit, aeternitas manet
Apply for a Blog
Please note that the posts on The Blogs are contributed by third parties. The opinions, facts and any media content in them are presented solely by the authors, and neither The Times of Israel nor its partners assume any responsibility for them. Please contact us in case of abuse. In case of abuse,
Report this post. 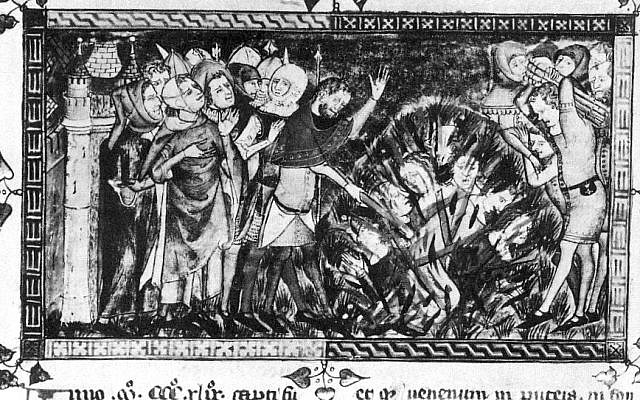 Representation of a massacre of the Jews in 1349. (Wikipedia)

As the great French political philosopher and historian Alexis de Tocqueville famously noticed: “History is a gallery of pictures in which there are few originals and many copies”.

Considering modern man’s zeal for historical knowledge in a rapid consumerist culture is limited or almost non, it is the duty of posterity to capture and evaluate the problems of today into a broad historic context in order to gain insight and understand on many levels.

As a person of Jewish and Tanzanian descent and an aesthetic love of both nature and art, like many, I am naturally concerned with social justice, equality, and the God-given dignity of humanity, the latter somewhat constitutes the (miss)treatment of my Jewish ancestors in the West – which in the times of the COVID-19 pandemic seems to be uncovering a close parallel with the Black Death of mid-14th century Europe.

This devastating plague of the past, as with the voracious one of today, decimated millions during that period and shaped the course of European history. It is clear however, that with the advancement of science and technology that we have a greater understanding of in contrast to the men of the time.

Men of the Middle-Ages were desperate to find yet alone the source of the calamity during that period.

Unfortunately, as with much of human history, it can be argued there was a lack of common sense. It is this lack of rational that led to the scapegoating of the Jews, falsely accused perpetrators who deliberately wanted to poison Christendom.

As it was reported at that time, the Solomon’s ancestors residing in the Jewish metropolis of Toledo, allegedly initiated the anti-Christian plot and dispatched their agents across Europe, with the alleged chief conspirator being Rabbi Peyret in Chambéry, Savoy.

What followed these accusations is what Francis Goya perfectly described, is a situation where ‘the sleep of reason produces monsters’ – monsters, which push people to committee heinous crimes to fellow men that go beyond human comprehension. All of these monsters of ignorance were fostered to satisfy insecurity, were released to exercise the lower nature of human beings, evil.

Many Jews during that time were arrested and tortured in order to force false confessions of guilt. As a result, once Westerners had their scapegoats and confessions which they could foist their anger on, the mass butchering and burnings were to soon follow.

This started with the slaughter of forty Jews in April 1348 in Toulon, Provence. By 1349 the Western madness spread to their part of Europe, where the most significant barbaric acts were committed during the Erfurt massacre, the Basel massacre, Aragon, Flanders, not to mention the Strasbourg massacre of 1349 where 2000 Jews were burnt alive and looted.

In the spring of the same year, the Jewish community in Frankfurt am Main was annihilated and this was followed by atrocities in Mainz and Cologne by August.

By the end of 1349 the worst of the pogroms had ended in Rhineland, and by 1351 there had been 350 incidents of anti-Jewish pogroms, 60 of which were major, and 150 were minor, total of 210 communities completely exterminated.

All of this caused the eastward movement of Western Europe’s Jewry, where King Casimir III of Poland enthusiastically gave them refuge and protection and among many things wanted to tap into their ingenuity and economic potential.

Although many scholars try to solely associate the Black Death horrors with Christian bigotry and fear of the plague, it is crucial to bear in mind the economic factor, where the fear-stricken mob led by the butchers’ and tanners’ guilds, and by the nobles who were determined to do away with the Jews who were notably economic competitors and recipients of huge loans.

Today, when it comes to COVID-19, the present situation bears some resemblance to the one described above. With President Donald Trump not long ago having a nerve to intentionally ‘racialize the Coronavirus’ by calling it the ‘Chinese virus,’ he has been nurturing the very same moods akin to those aimed at Jews in the Middle Ages, where Chinese people fall victim of the rise in Anti-Asian hate crimes around the world.

Bearing in mind the ongoing US-China trade war, and the fact that China owns about $1.1 trillion in U.S. debt, I am afraid that this might be Trump’s strategy to economically contain China in a way that can set some countries on a dangerous path of nationalistic madness in international politics serving his geo-economic agenda, where China will ultimately serve as a convenient scapegoat for his failures as a leader.

In my opinion, there are other ways to economically compete with the Communist Party of China (CCP), but racially charged language aimed at stigmatizing the Chinese people in the U.S. and abroad is not the right way to move forward.

About the Author
Adriel Kasonta is a London-based foreign affairs analyst and commentator. He is the founder of AK Consultancy and editorial board member at the peer-reviewed Central European Journal of International and Security Studies (CEJISS) in Prague. Kasonta is a former chairman of the International Affairs Committee at Bow Group, the oldest conservative think tank in the UK.
Related Topics
Related Posts
Comments