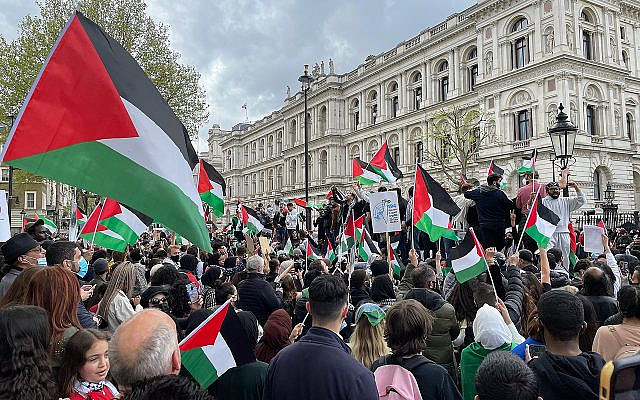 The catchy slogan that is chanted so ardently by supposedly well-intentioned human beings in demonstrations being held around the world, ‘Palestine shall be free, from the river to the sea,’ is in effect a call for the destruction of Israel. And that, of course, is what the terrorist organization of Hamas wants to achieve.

The ability to ignore reality and fabricate theories and fantasies, twisting historical facts and despising actual reality, may bring consolation to a few hot-headed individuals, but will do nothing to solve the problem that lies at the heart of the Israel-Palestinian problem. Until the Palestinians, including Hamas, are prepared to come to the negotiating table there can be no solution to the problem. So I feel it’s time to set the historical record straight.

When the United Nations voted to partition British-mandated Palestine in 1948 the Jews accepted the decision while the Arabs did not. The Arab countries did not hesitate to mobilise armies in order to conquer the country and keep it in Arab hands. The heavily outnumbered Jewish population fought with its back to the wall to retain the land that had been its ancient home, knowing that any defeat would put an end to the dream of a Jewish homeland. Having been all-but annihilated by the Nazis not many years before, the Jewish people knew what defeat would mean for them..

History has had many twists and turns regarding the Jews. They flourished in their homeland two thousand years ago until they were exiled by the Romans. They flourished in the diasporas of Spain, North Africa and Eastern Europe until they were once again persecuted, slaughtered or forcibly exiled. Throughout their history, the Jews have had to get up and leave their homes on numerous occasions until in the nineteenth century they started to make their way back to their ancient homeland in order to rebuild their lives there, establishing towns and settlements, buying land and developing agriculture.

After fighting off superior forces in 1948 the nascent state of Israel was subject to attacks from its Arab neighbours in 1956 and 1967, when it managed to conquer the areas known today as the West Bank, Sinai and the Gaza Strip. The last two were handed back to Arab control in agreements reached with the Arab countries concerned, and much of the West Bank is under the autonomous Palestinian Authority. During the nineteen years that Jordan controlled the West Bank nobody gave a thought to the establishment of an independent Palestine.

At the same time as thousands of Arabs left their homes in Israel as a result of the war of 1948 a similar number of Jews was expelled from the Moslem countries where they had lived for hundreds of years (thousands of years in some cases). While the Arab host countries kept ‘their’ refugees in abject misery in refugee camps, Israel shared what little resources it had with the newcomers, absorbing them and building homes for them as quickly as possible.

The cynical abuse of their brethren by the Arab countries is echoed by the attitude of the Hamas rulers of Gaza towards the population of that unfortunate enclave. When Israel occupied it after 1967 it became the site of flourishing agricultural settlements. These were left in place when Israel pulled out in 2005, in the hope that the local population would make use of them. This did not happen, of course, and Israel’s departure was the signal for a rampage of destruction, pillage and devastation.

There aren’t many Israelis who don’t feel sorry for the impoverished, beleaguered civilian population of Gaza. There can be no forgiveness for their leaders, who use them as human shields and deploy the funds sent to alleviate their distress in order to buy weapons, build attack tunnels, and waste their efforts on the pointless exercise of trying to eliminate Israel.

Israel cannot possibly allow itself to be defeated in any military confrontation with those who seek to destroy it.