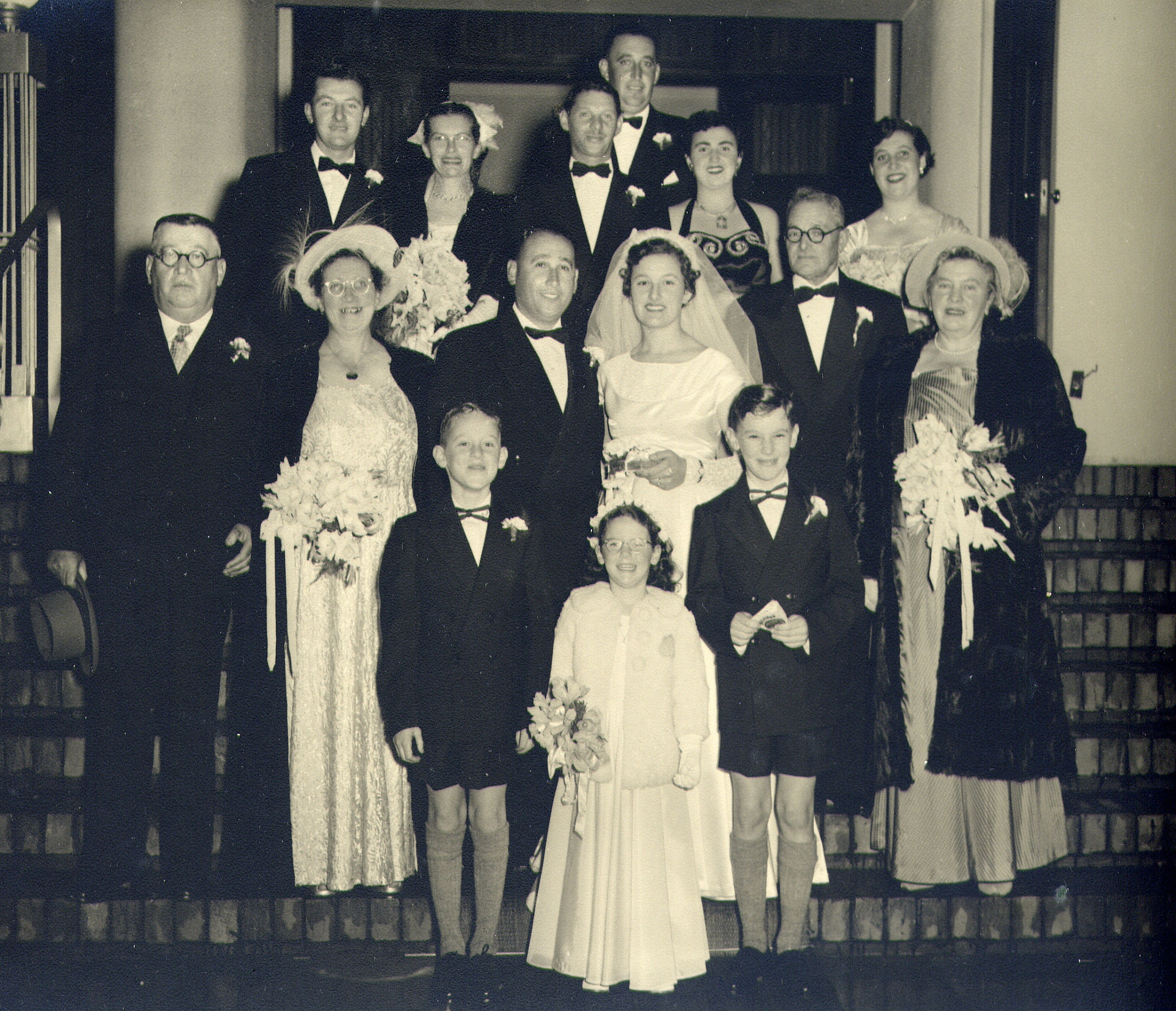 Vicky and Nokkie Scher on their wedding day. Golda Scher next to the groom, Judith Sher, behind the bride with Hanke next to her.

Fifty years have now passed since the fateful day which forever changed the Scher family and the Jewish community of Durbanville in the Cape.

When Vicky Surovsky accepted Nathan (“Nokkie”) Scher’s marriage proposal in 1952, she did so knowing that it would mean changing her way of life.

While Durbanville is just a 30 minute drive from cosmopolitan Cape Town where Vicky had grown up, it may as well have been in a different country.  The “dorp” (little village) serviced surrounding wine, wheat and cattle grazing lands. Phone numbers consisted of 2 digits. Its inhabitants were predominantly Afrikaans speaking farmers and ancillary workers and cultural and commercial opportunities were almost non-existent. Arriving from Lithuania, Nokkie’s father Abie and his three brothers had settled there at the beginning of the 20th Century. Nokkie was the second of four born to Abie and Golda Scher, who, says Vicky, had a heart like her name. Nokkie and his brother Joe managed the family farm while sisters Sarah, (“Sox”) and Hannah (“Hanke”) completed the sibling group.

By the time Vicky joined the family, the large and expanding Scher clan was synonymous with the small, vibrant Jewish community where Nokkie had developed an expertise in reading the weekly Torah portions and led many services. Vicky soon became involved with family and community, becoming an active member in the Durbanville Women’s Zionist Society, organizing social events and raising funds for Israel. They also had a wonderful relationship with their God-fearing Afrikaans neighbors. To this day, there is a Scher Street in the town. Over the course of 8 years, Vicky gave birth to 3 sons and a daughter. Life could not have been more even-keeled.

And then, on a fine, early summer’s Tuesday in late 1970, the family were invited to a Brit celebration in Cape Town. The men could not leave their work, so Vicky, who was the only female driver in the family, picked up her parents-in-law as well as Hanke and Judith, Joe’s wife. They headed out, planning a short stop at the Pinelands Cemetery to visit Vicky’s parents’ graves. As they stood at the traffic light on the approach to the cemetery, a heavy truck coming from behind smashed into the stationary car. The car was thrown into the air, hit a pole and instantly burst into flames. A policemen driving past ran over to the car and pulled Vicky and her father-in-law out of the car. Ironically, the fact that seat belts had not yet become standard car components probably saved them. But the three women in the backseat were killed instantly.  As they stood there, shocked and horrified, Abie Scher uttered a statement that still rings in Vicky’s ears. Through his pain and anguish he said, “It is the will of God,” a lesson in faith she will never forget.

The tragedy shook the entire town and deeply impacted the community. Hanka and Judith left two, and three children, respectively. They ranged from 15 years to 11 months. Vicky’s son Neil remembers attending shul when he and his brother were the only post-bar mitzvah males not saying Kaddish.

To this day Vicky still does not know how she survived emotionally intact, from what was the darkest hour of her life. There was no time for, indeed no awareness of, post trauma psychological counseling. Yet drawing strength from the faith and fortitude instilled  in her by her parents, she and her sister-in-law Sox, immersed themselves in taking care of 3 decimated families. She would visit her father-in-law every day and played a role in bringing up the children, especially until the two widowed brothers-in-law remarried. Vicky was required to drive in order to be of assistance. The first time she got into the car her legs were shaking. But with her inborn resilience she overcame her dread and soon Nokkie bought a bigger car in order to accommodate her orphaned nephews and niece. The measure of their respect and love is that 50 years later, even though they are spread across the world, they are still in constant contact with Vicky. “Thank God I have Whatsapp.” she says. 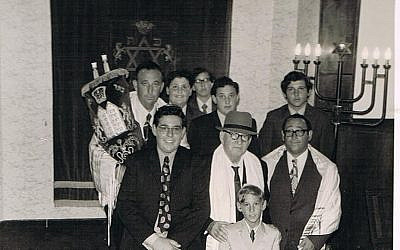 Dedication of Sefer Torah 1971
Abie Scher with sons and grandsons

Despite the tragedy, the focus that Nokkie and Vicky had on Aliya was unmoved. Their Zionist fervor had intensified with trips to Israel and in 1982 they arrived in Jerusalem following three of their children. Vicky found her calling at the Israel Museum, becoming a volunteer guide. For twenty years she expounded on treasures of our Jewish heritage to Jews and gentiles from around the world. 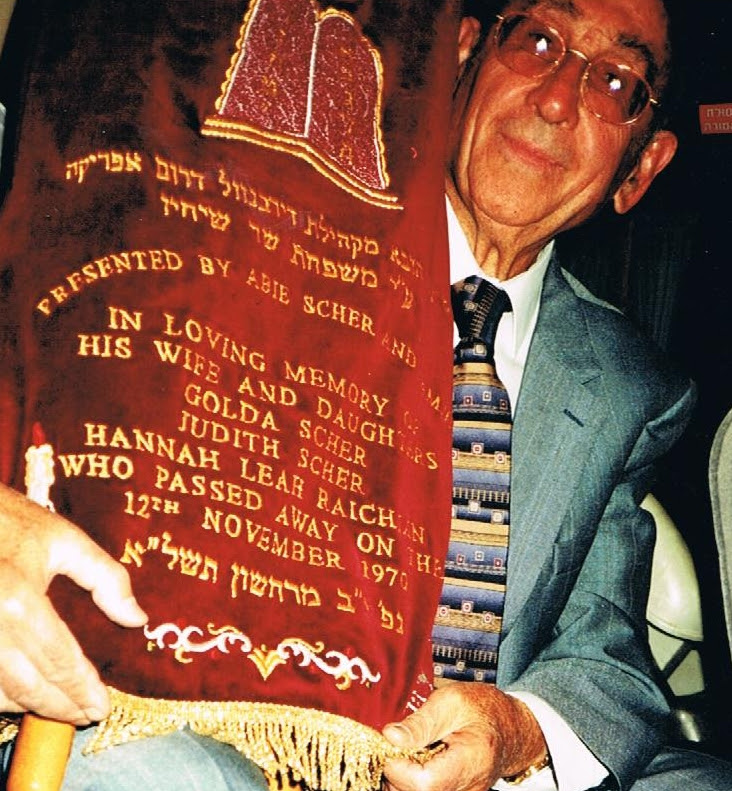 Eleven months after the accident, at the conclusion of the Kaddish period, the family had installed a Torah Scroll in the Synagogue from which Nokkie read many times. Years later when the community dwindled as the Jews moved to the cities and the synagogue ceased to function on a regular basis, the scroll “made Aliya” and fittingly, now serves a community in Ramot, Jerusalem, where Vicky and much of her family resides. A number of her offspring have read from that scroll on their Barmitzvahs.   There are now over one hundred Durbanville Schers and their descendants living in Israel.

Nokkie passed away in 2016. Now aged 88, Vicky is remarkably vibrant. Surrounded by family she says, “I live alone but I am not lonely”. She navigates around her iPad, reads and enjoys her hobbies. 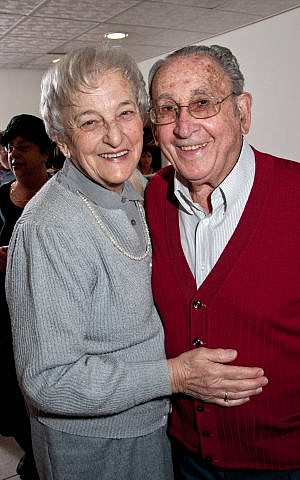 Totally independent, residing in a walk up apartment, Vicky is fully engaged with a broad range of family, including many grandchildren and even more great-grandchildren. Her prodigious memory would be the envy of a 30 year-old. She effortlessly navigates between 4 languages, telling me her story in English, quoting her parents in Yiddish, her neighbors in Afrikaans and throwing in a Hebrew expression here and there.

Hillel the Sage said, “If I am not for myself, who will be for me, and if I am only for myself, what am I?” If anyone embodies that spirit, it is Vicky Scher.

(All images, courtesy of the Scher family.)