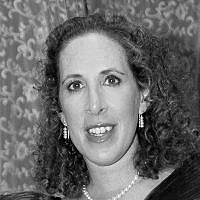 The Blogs
Leora Leeder
Apply for a Blog
Advertisement
Please note that the posts on The Blogs are contributed by third parties. The opinions, facts and any media content in them are presented solely by the authors, and neither The Times of Israel nor its partners assume any responsibility for them. Please contact us in case of abuse. In case of abuse,
Report this post.

My daughter Raphaela attends the Evelyna Elementary School in Rehavia, one of the oldest buildings and academic institutions in Jerusalem. Starting in third grade, they give each girl lessons in a musical instrument, as suits their drive and personality. Tonight, I attended my daughter’s school concert, Part I, featuring grades three through six playing their musical instruments. Part II will take place on Thursday, when there will be a kind of Battle of the Bands, a gathering of the choirs of various schools.

The theme of the instrumental concert tied into the 70th birthday of Israel, and all the songs in the program echoed the creative fruits of the history of the country, our various wars and conflicts, and our achievements.

So much of the last 21 years of my life as an Israeli has come full circle since I gave birth to my daughter almost nine years ago. My daughter, for example, has taken dance classes for the last four years in the same rooms where I studied in ulpan right after I moved to Israel. I sit and wait for her to finish her class, reading my book or chatting to other parents or napping, in the lounge where I met some of my oldest friends.

After this concert on the Hebrew University Givat Ram campus, I especially felt the power of music and memory, with two songs in particular. When I was 5- or 6-years-old, my mother sang in the Zamir Chorale, and I remember a special concert they did at Lincoln Center around the time of the Yom Kippur War. It must have been around Easter time, because I was running around backstage at Lincoln Center and collecting candies in a pastel purple basket someone had given me. Looking back, as an adult and a parent, it becomes obvious that my mother was unable to find a sitter for me; who in their right mind willingly takes a 5-year-old to a rehearsal at Lincoln Center?

After the rehearsal, I sat as an audience member, hearing the new songs coming out of Israel at the time, words that expressed longing for a time to rebuild the country and live in better times. Specifically the song, “Lu Yehi.” I remember as a little girl crying, not so much over the political or historical significance of the song, but because it was so hauntingly beautiful, and that was my mother singing on stage.

As a side note, I tried to join the choir in college but was not accepted because I could not read musical notes well enough. And now I have a daughter in Israel, sabra to the core, who not only can read notes, but is also in her school choir. Full circle.

When I was a student at the Hebrew University, my junior semester abroad from Barnard College, I attended a concert in honor of Yom HaAtzmaut at the stadium at Givat Ram, quite close to where the concert was held this evening. I don’t remember all the Israeli pop stars who played the concert itself, but at the end, they had a sing-along, with a playlist much like the songs the girls played tonight. With fireworks in the air, they sang the song, “Machar” (Tomorrow), and one of the stanzas goes like this: “Tomorrow, each person will build with his own hands all that he has dreamed of today.” And in that moment I chose to make aliyah — it took me seven years and a chiropractic degree before I actually made it, but it was in that moment that I decided I could not be myself, truly myself, anywhere else.

And tonight, as the concluding piece of the concert, all the parents and all the music teachers and all the children joined to sing “Machar,” with the girls singing a stunning harmony that they had previously rehearsed with the choir director. Try to imagine the flutes and the cellos and the violins and the guitars and the trumpets and the recorders and the piano: almost 500 fathers and mothers, grandparents and school children, singing the words of hope and inspiration, “All of this is not allegory or a dream, it is as true and as right as the sun light. All of this will come tomorrow, and if not tomorrow, then the day next.”

Everyone was crying so hard, that we barely got through the national anthem of HaTikvah.

So here I am, watching my daughter and her classmates bring the defining music of our Israeli history alive. Myself, a single mother by choice from New York, with a daughter born in Jerusalem, the first child on my mother’s side in four generations born here since my grandmother, Rebecca Danzig Keller, was born in Mea Shearim in 1922. Full circle.

About the Author
Dr. Leora Leeder: mother, doctor, photographer, runner. She tries to see the beauty in those small moments every day. And she tries to get some sleep every once in a while.
Related Topics
Related Posts
Leora Leeder
Comments