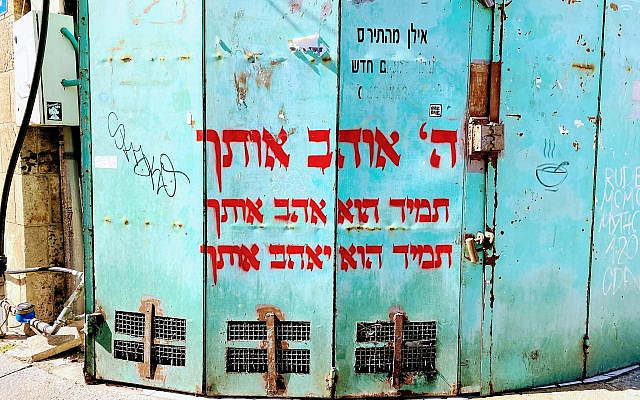 The Jewish people’s exile was only temporary and that is what G-d promised us. But the anti-Semites of the world somehow want to make us believe that G-d has forsaken the Jew permanently, and thus they chant “Free, Free Palestine!” and call the Jews occupiers.

True nobody is perfect, and the Jewish people have known a long and painful 2,000 years of exile, but thank G-d, now we are able to experience a miraculous and please G-d, an eternal redemption in the land of our forefathers, the Land of Israel. However, it’s fascinating that from the very first sin in the Torah and forward in our history, exile is a frequent and most devastating punishment for wrongdoing, but also one that bridges us to repentance and ultimate redemption.

In the beginning of the Torah, Adam and Eve ate from the forbidden fruit of the Tree of Knowledge and were exiled from the Garden of Eden and forced to labor and suffer for both their food and offspring. Next Cain kills his brother Abel, and he too was banished, cursed from the land, becoming a wanderer on earth. Subsequently, in the Tower of Babel, G-d dispersed the people across entire earth and changed their speech so they could no longer understand each other. Then after Joseph’s brothers plotted to kill him and sold him into Egypt, all of Jacob’s family were brought down, exiled and enslaved there for hundreds of years. And even Moses himself, when instead of speaking to the rock as G-d instructed, strikes it to bring forth water for the Israelites, was punished, prohibited from entering the land of Israel. Similarly, G-d warns against performing various abominations and says in Leviticus (18:28):

Lest the land vomit you out when you make it unclean as it vomited out the nations that were before you.

Moreover, while exile is a severe loss and opens us to the deeply painful consequences of homelessness and helplessness, it also provides a venue for eventual repentance and recovery. This unlike the ultimate punishment of “Karet” (being “cut off,” premature death) which is the opposite of exile in that it is a final ending and consequence for a person’s sins.

Why is exile the punishment frequently used by G-d to punish us? Rabbi Jonathan Sacks in his book, To Heal a Fractured World explains:

…Sin involves crossing a boundary, entering forbidden territory, failing to respect the separation between different spaces and different times…The punishment or consequence of sin is exile.

I remember as a teenager learning from Rabbi Abner Weiss that G-d doesn’t actually punish us for evil, but rather He distances or removes himself, His dwelling or Shechinah from among us, and without G-d’s heavenly presence and light, we suffer in spiritual darkness, unprotected amidst the potential dangers and cruelties of the world about.

However, our faith and history teach us that even from the longest and darkest of exiles and persecution comes the redemption of the L-rd.  G-d promised to redeem us from Egyptian slavery (Genesis 46:4):

I will go down with you to Egypt, and I will also take you up again…

And similarly, with the long exile after the destruction of our second Temple, G-d promises the ingathering of the exiles to the Promised Land (Ezekiel 11:18):

…I will even gather you from the people and assemble you out of the countries where you have been scattered, and I will give you the land of Israel.

Rabbi Jonathan Sacks explains that our exile, although painful in the loss and persecution that we must endure, is also the cure for our souls by being an opportunity for us to experience the wrongs we did and to do teshuva for them:

By suffering the wrong he inflicted on others, the wrongdoer comes to feel remorse. He or she repairs the damage they have done. Exile ends in homecoming, and something of the lost harmony of the world is restored.

When after the horrendous suffering of the Holocaust at the end of our 2,000-year exile, we were once again brought home and established the modern State of Israel and experience the ingathering of our people from countries all around the world, we are so privileged to be able to witness the greatest redemption of them all and all foretold by the Prophets thousands of years ago.

In short, the worst punishment is not just being hurt, but also feeling exiled, abandoned, and hopeless. This is where we must look up to the Heavens for G-d’s salvation, and work to merit His bringing us back towards His divine presence. As with anyone who has experienced personal “exile” and suffering in life, we know those are the darkest of days when G-d’s face is hidden from us, and we may feel alone and abandoned. But G-d is always there, waiting for us to seek Him out and return to Him, and that is when we can finally not only see the light at the end of the darkest of tunnels, but also when we can feel G-d reach out to us and bring us back home again to Him.

G-d loves the Jewish people as He does all people, and He is faithful to His word to return them to Israel. Those who bless Israel, will be blessed!