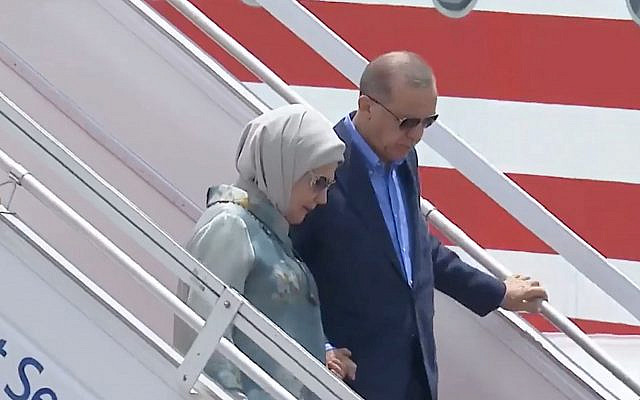 Turkish President Erdogan arriving in Bali for the g20 summit. Source Twitter @G20org screenshot https://twitter.com/g20org/status/1592464271287681024?s=20&t=S3LISHSNUAqp1wrndpA4rA (used in accordance with Clause 27a of the Copyright Law)

The G20 head of state summit that has kicked off this morning in Bali, gathers some of the most powerful leaders on earth under the aegis of the Group of 20 (G20). The countries are the top 20 economies of the globe so naturally poorer countries are excluded. G20 will continuously be held in Asia for two years, this year in Indonesia and 2023 in India. As of late, G20 has become the go-to forum for global leaders to coordinate responses from global emergencies such as COVID, global warming , supply chain resilience, to this years hot topic, Russia.

While this years G20 villain is undisputedly Russian President Vladimir Putin, last years villain, Chinese President (and now possibly dictator for life) Xi Jinping seems to have used the platform to kickstart the “benevolent Xi” campaign. The change in the Chinese leaders attitude is remarked. He missed last years summit in Rome due to the pandemic. Chinese diplomats, foreign ministry and the people’s republic’s air force blew hot and cold at US Speaker Nancy Pelosi’s visit to Taiwan. And here is Biden’s basketball buddy Xi, condemning nuclear weapons, selling out his all weather friend Putin with whom he had declared “no limit” friendship just in February and ready to assume global leadership with the US.

The question begs asking, what changed? Is it that Xi does not need to grandstand anymore now that the 20th Congress of the Chinese Communist Party (CCP) in October has crowned him leader for life? Or has the Chinese economy taken a larger than expected hit that requires Xi to meld his approach to the international community? Or is it some good old taqiyya, adopted communist style?

The three hour dialogue between the Chinese leader and the US president at the margins of the Bali G20 summit produced a “breakthrough” some analysts said, though the US president who is a habitual off-the-cuff speaker, read his notes in a focused manner during statements to the press and used the pacifying term “One China” twice.

“The world is big enough for the two countries to develop themselves and prosper together,” tweeted Hua Chunying, a foreign ministry spokesperson who accompanied Xi in his meeting with Biden echoing Kissinger’s policy which has shaped relations with the people’s republic since the thaw in relations under Nixon and Mao. While the new bonhomie between the two arch-rivals may calm nerves in Beijing and Washington DC, “the new and peaceful Xi” is an untested commodity and good until the next time China feels insecure about Taiwan or its role in the world. The worse may be still to come….

The most opportunistic leader at this G20 is not Putin, who in his absence may try and send feelers for peace to the international community, but Turkish President Erdogan. Erdogan’s game is anything but straight. He is certain he can get away with almost anything on the international stage. While after a long period of tensions, he has managed to restart peaceful relationships with Israel, the jury is still out on Turkey’s role in the civil strife in certain mixed cities. It is well known that Turkey supports Hamas and other Islamic brotherhood organizations that fiercely oppose Israel’s existence. It is also a fact that Turkey is holding NATO hostage with its veto for the Swedes and Finns joining the transatlantic alliance. But the Director of the CIA and his Russian counterpart meet in Ankara and Erdogan’s role in keeping migrants at bay in Europe earns him the kudos and funds of the EU despite his blatant regard for human rights and journalistic freedom which the EU treasures.

What is worrying is Erdogan’s use of false flag operations to manipulate international opinion and allow him carte blanche when it comes to dealing with the Kurds in Turkey and especially in Syria. First it was the “coup”, which allowed him to purge the rank and file of the government, army and all forces of people he considered disloyal to his cause. The recent explosion in Istanbul in the fashionable Taksim square area, site of the protests in 2013 has convenient timing. In record time Turkey’s Interior Minister Suleyman Soylu said the government believed Kurdish separatists from the Kurdistan Worker’s Party (PKK) and the Democratic Union Party (PYD) were most likely responsible for the assault, a claim denied by the PKK’s armed wing.

“It is PKK/PYD terrorist organization according to our preliminary findings,” Soylu said in a press conference at the scene of the attack on Istiklal Avenue. He did not elaborate or provide details of how investigators had reached this conclusion.

The police added: “In her interrogation, the person stated that she was trained as a special intelligence officer by the PKK/PYD/YPG terrorist organization and that she entered our country illegally through Afrin (North East Syria) for this attack.” The People’s Defense Units (YPG), also called People’s Protection Units, is a mainly-Kurdish militia in Syria and the primary component of the Syrian Democratic Forces (SDF) which was key in the global war against the ISIS. Without the YPG, any success of the international community against the ISIS would have likely not been possible. The YPG are US allies and the US tries to protect the YPG from attacks by Turkish army and Turkey supported Islamic extremists.

On Jan. 20, 2021, groups affiliated with ISIS attacked al-Sina Prison in the southern part of the city of al-Hasakah, in Syria’s far northeast. The attack, which lasted for nearly nine days, ended with the killing of dozens of ISIS fighters and detainees inside the prison, in addition to approximately 140 members of the Syrian Democratic Forces (SDF) and its prison guards.

The US and international community has been concerned that any further push into Northern Syria by Turkish forces with the excuse of implementing a “buffer zone” will endanger Al-Hol and Azraq camps. Together the camps hold approximately 60,000 vulnerable, displaced people, and serve as prisons for around 10,000 alleged ISIS militants, who taking advantage of the SDF/YPF being engaged in combating the Turks, will definitely attempt a jailbreak putting the world at risk.

While the Kurds, Syrian and Turkish, deny any involvement in the Istanbul explosion, there are other theories to its origin. One such thesis is that Erdogan wants to abandon his coalition ally, the right wing secular nationalist party MHP, and therefore he has been in discussion lately with the Kurds, more specifically with the leader of the People’s Democratic Party (HDP), Mr Selahattin Demirtaş, in his prison, to form an alliance between the AKP and HDP in the next general election in Turkey in mid 2023.

Some Kurdish analysts say that Sunday’s terrorist attack was carried out by the deep state in Turkey, controlled by the nationalists, and was a message to Erdogan about his potential alliance with the Kurds. Thus, Erdogan was reluctant to name the PKK as the perpetrator of the attack. It also turned the Turkish public’s attention from a disastrous economy and skyrocketing inflation. It’s only time that Turkey “identifies” targets in North East Syria and uses this attack as an excuse for a “special military operation”, emulating Russia in Ukraine, plunging the region into a security nightmare. One of the reasons the Turkish Ministry of Foreign Affairs rejected the US embassy’s condolences.

Of all the leaders present in Bali, Erdogan is the one to look out for. He feels he is invincible and he is desperate, a dangerous combination in an absolute ruler. With Xi and Putin the world must worry about Erdogan, his desperation is the reason why the middle east and the world may plunge into another security crisis soon.