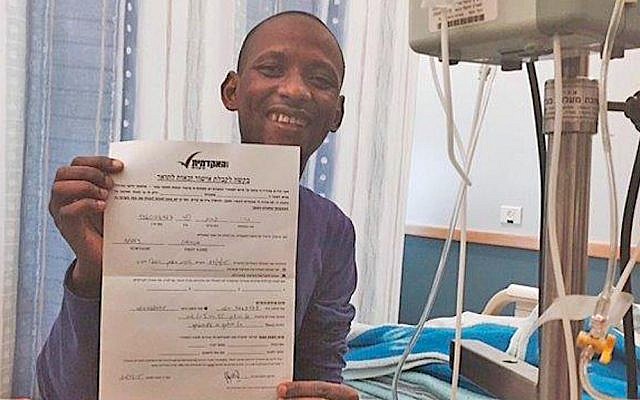 Gassim Barry, who lived in Israel for the last 13 of his brief 25 years, died a month ago in Tel Aviv without ever realizing his greatest wish: to be granted resident status in the country. He passed away surrounded by people he loved and who cared deeply for him: friends, adoptive parents, guardians, teachers, classmates, doctors, mentors, voluntary care-givers and fellow refugees. An asylum seeker until his very last day, Gassim was laid to rest in Jaffa; in the only place he called home.

Gassim Barry was an Israeli in every sense of the term — except in name. His odyssey is that of many of his community: helped by so many magnificent Israelis and shunned by its establishment. Isn’t it time — especially on this very day — that Israel, constructed on the ashes of those who could not flee, as a refuge for their survivors, finally find a way to welcome those who have nowhere else to go?

Gassim’s personal journey and his struggle for formal recognition in Israel were detailed in this column two years ago. Born in Guinea, he was the sole survivor of a massacre that obliterated his entire family, leaving him an orphan at the age of 10. He was captured — along with others — by human traffickers who moved him overland to Egypt and ultimately to the border with Israel, where he was picked up by Israeli troops. Together with Jean, another Guinean child who had suffered a similar fate, at the age of 12 he was fortunately deposited into the warm embrace of Yemin Orde, the haven of disadvantaged children headed then by Dr. Haim Peri, an educator who became their surrogate father and continues to be the guardian angel of so many abandoned youth.

Gassim and Jean grew up in the nurturing environment of this wonderful boarding school in the north. With the help of their adoptive parents and newfound brothers and sisters, they quickly came to resemble Israeli teenagers — babbling away in Hebrew, cramming for matriculation exams, volunteering in the community, developing active social lives. For this brief, four-year period, they lived in a loving (yet virtual) Israeli paradise, protected by their minority status from action by the authorities.

And then Gassim and Jean graduated from high school. They began the lengthy process of requesting asylum in Israel on humanitarian grounds — one whose resolution Gassim will never see. With the help of their guardians — and the sponsors they found — they were admitted on full scholarships to the Academic College of Tel Aviv-Yafo and received permission to stay in the country while their applications were being processed (only in their final year of studies did they actually receive student visas). Each in his own way, Gassim and Jean flourished at the college, making friends, exploring new horizons, quickly absorbed into campus life and successful in their studies. They were enveloped in an additional support network including top administrators, lecturers and student assistants who worked together with their adoptive families to ensure their wellbeing. Their involvement in Israeli life deepened — even as efforts to formalize their status dragged on.

During Gassim’s last semester, he began to complain of constant discomfort while eating. Intensive tests (covered by medical insurance funded by Yemin Orde donors) came back with the dire verdict: cancer of the thorax. Gassim began chemotherapy and the college rallied by providing graduate students in medical psychology to accompany him to his treatments and to help him navigate Israel’s health bureaucracy. Administrators, faculty and students visited him regularly. Haim Peri and his aide, Tali Ritz, mobilized yet again; Jean was with him at all times. Everyone clung to the hope that he would beat the odds and recover.

In these circumstances, having completed four years of academic studies, Gassim and Jean’s lawyers at the Hotline for Refugees and Foreign Workers stepped up their appeals for permanent status in Israel on humanitarian grounds, arguing that, in the case of Gassim, these considerations were compounded by medical concerns. In an emotionally charged appeal to the appellate court in the summer of 2015, not an eye remained dry as Jean and the Gassim recounted their stories and their Israeli families and friends expounded on the many ways they had become an integral part not only of their own lives, but of Israel today.

After repeated postponements, the court instructed the Ministry of Interior to take Gassim’s condition into account (although it did not refute the state’s claim that “cancer is a chronic disease and not grounds for special humanitarian consideration”). It also ordered the Ministry of Interior to review the applications submitted by Jean and Gassim and to grant them both student visas in the interim, should they continue their studies (Jean is now doing a master’s degree in business administration; Gassim registered for a graduate program in organizational behavior, but was too weak to commence his course). Since then no further ruling has been handed down.

This is hardly surprising. At the moment, more than 22,000 requests for refugee status (there are approximately 42,000 asylum-seekers currently in Israel) remain unprocessed. Reports released this week reveal that the Ministry of Interior has not accepted any new application for over three months. More than one thousand people — mostly from Eritrea and Sudan who cannot be repatriated — are incarcerated at the moment in the Holot detention center. Many of them are under undue pressure to relocate to Rwanda and Uganda — where according to latest reports they have been subjected to multiple indignities and live in unspeakable poverty. Those asylum-seekers not imprisoned are subsisting in limbo. Undocumented, unrecognized and unprotected, they cannot seek legal employment and are bereft of basic social and medical rights so essential for the pursuit of life with a modicum of human dignity.

Gassim was just one – extreme — victim of Israel’s inability to design a policy for the protection of those seeking a haven from persecution in its midst (although it excels in berating other countries for their inaction in this regard). Gassim was also the proud beneficiary of the best that Israel has to offer: education, healthcare and services rendered with warmth, love and all the support that Israel’s citizens have to offer.

All these marvelous people couldn’t save Gassim — although they know that they did everything possible and more to do so until the very end. Even after he returned his soul to his creator in the early hours of March 21, 2017, they successfully fought his last battle for him: to prevent the transfer of his body back to Guinea where no one would mourn him and ensure that he be buried here amongst his friends.

Gassim Barry was never expelled from Israel and never welcomed by its authorities. But he profoundly touched almost every Israeli who came to know him. Through him, those who nursed him day and night during his last two years — both in and out of hospital — are better people. They could not, either individually or collectively, surmount the obstacles posed by an official Israel that has too often strayed from its moral and historical obligations to the displaced and the downtrodden. But by demonstrating humanity at work, they have not turned their backs on the duties of this legacy and therefore continue to give hope for a better and truly just Israel. These Israelis, who instinctively always try to be and do better, are what the Israel that Gassim loved is all about.

May he finally rest in peace. 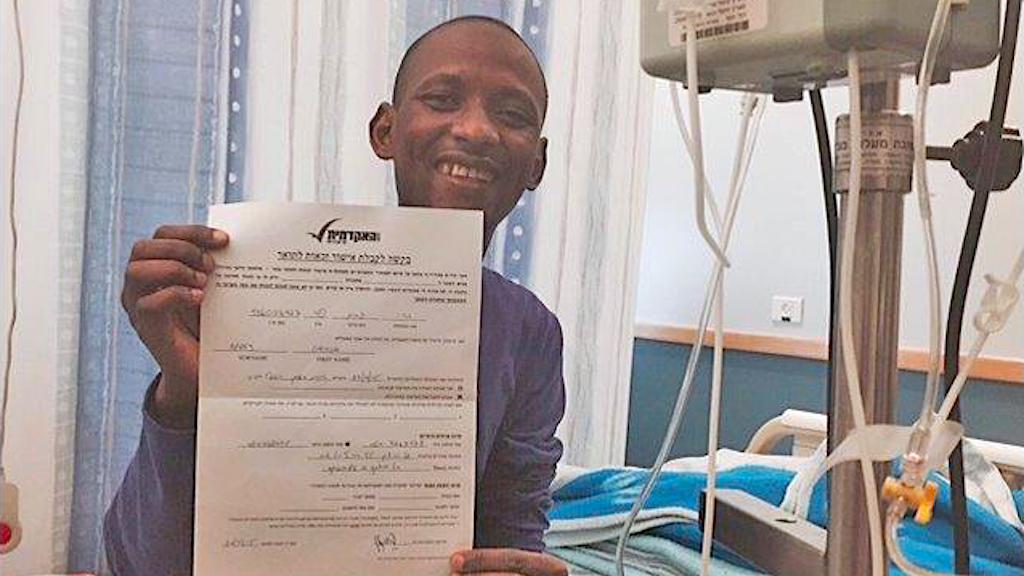 Gassim Barry receives news of his eligibility for BA certification while hospitalized for cancer treatment (courtesy)
About the Author
Naomi Chazan is professor (emerita) of political science at the Hebrew University of Jerusalem. A former Member of the Knesset and Deputy Speaker of the Knesset, she currently serves as a senior research fellow at the Truman Research Institute at the Hebrew University and the Van Leer Jerusalem Institute.
Related Topics
Related Posts
Comments