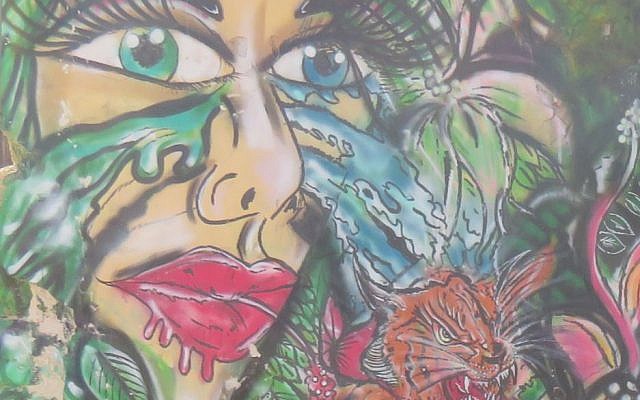 Mural in Tel Aviv that could very well be depicting the horror of war.

Another war between Israel and Hamas will happen, perhaps in 2019. It is not a matter of “if” but a matter of “when”. When it happens, the accusations against Israel will grow louder and more aggressive than ever, just as they did in the wars of 2008, 2012, and 2014. And the same lies will be recycled.

Israel took Gaza from Egypt in June 1967 in a war of self-defense, and it established small Jewish communities in parts of Gaza, but in September 2005, Israel withdrew its troops and all Jewish communities, leaving Gaza completely in Palestinian hands. Within less than two years, in June 2007, Hamas took control of Gaza after a violent battle with Fatah.

As a result of terrorist attacks from Gaza, Israel imposed a blockade with the cooperation of Egypt which, like Israel, has some common borders with Gaza. Israel and Egypt have similar responsibilities for Gaza. Both countries once controlled it, and both countries have a blockade on it at present. But neither country occupies Gaza. Gaza is in fact under the tyrannical regime of Hamas, a terrorist organization that is allied with the Iranian regime. If any country can be said to occupy Gaza, it is Iran.

Lie #2: Gaza is under siege

Israel voluntarily left Gaza in 2005 and evacuated all Israeli settlements. It imposed no blockade. The blockade, which is an arms blockade, not a general blockade, was imposed by Israel and Egypt only after Hamas took control of Gaza and continued encouraging and participating in attacks on Israel, rather than trying to stop them. The only purpose of the arms blockade is to stop the attacks. Even the anti-Israel Al Jazeera admits that the blockade “has been in place since Hamas violently took over power from Fatah in 2007”. The arms blockade was even recognized by the United Nations, as legitimate.

An Israeli government website lists the items for which entry to Gaza is controlled. Some items are banned while others have their quantities limited. The items on that list are arms, munitions, and dual-use goods that can be used for civilian purposes but can also be used for terrorist activities. Examples of such goods are concrete, steel cables, and some types of vehicles.

Gaza is not under siege. A siege consists of surrounding a place and trying to starve its residents in order to capture it. Israel has not starved the residents of Gaza nor has it tried to capture it. Israel provides regular transfers of humanitarian aid, even when Israel is under attack from Gaza. Every day, “an average of 800 trucks enter the Gaza Strip carrying food, medical equipment, fuel, building materials, agricultural inputs, textile products and more”.

Residents of Gaza can even travel to Israel for medical treatment. Israel is not trying to harm them, it is simply protecting itself. If Gaza authorities prevented terrorism rather than initiated it, there is absolutely no doubt that the arms blockade would be lifted. Those who are concerned about the effects of the arms blockade should blame Hamas, not Israel.

Lie #3: Gaza is too densely populated

This lie claims that Gaza cannot be successful because it is too small.

Israel, which by the way has been a strong ally of Singapore since 1965, has even offered to help Gaza develop its economy, but predictably, Hamas rejected the offer because it would mean having to end the attacks on Israel.

This lie is also cited in response to Israel’s accusation against terrorists that they place their military facilities in the most populated areas in order to increase the number of civilian casualties and gain media sympathy. The lie claims that attacks on Israel occur from densely populated areas because Gaza has no areas that are not densely populated.

This is of course untrue. The Gaza strip has many open spaces that are very sparsely populated, including forest areas and farming areas. Only cities are densely populated, but the cities are where terrorists choose to place their military facilities in the hope that Israeli strikes on those facilities will cause civilian casualties.

Lie #4: Both sides must show restraint

Rocket attacks from Gaza against Israel intensified after the Hamas takeover in 2007. The attacks have continued since then, except for the occasional ceasefires. In a period of two days alone, 460 rockets were launched towards Israel causing one death and 108 wounded. Israel cannot allow this violence to continue without defending itself.

If terrorists stopped attacking Israel, there would be peace between Gaza and Israel, but the terrorists will not stop voluntarily. Hamas has made its objective very clear. It wants all Palestinian refugees and their millions of descendants to enter Israel and transform it into an Arab state. This is the only outcome that Hamas would accept as a permanent solution.

When someone demands “restraint on both sides”, something that United Nations officials often do, it is hypocritical and does not recognize the reality of the conflict. One side, Israel, wants peace, and the other side, Hamas, does not. This is why there is a conflict. No amount of restraint from Israel would bring peace.

Lie #5: Gaza residents are desperate because of Israel

Gaza residents have been engaged in riots at the border with Israel since March 2018. The lie is that these riots are due to Gaza residents feeling powerless in the face the blockade, and that they are involved in riots only because they see no other way to improve their situation.

There is no doubt that Gaza residents feel desperate, but that desperation was not caused by Israel.

Those who want to live in peace with Israel feel desperate that they live under a regime that spends all its energy trying to destroy Israel rather than building an economy that provides jobs and social services. And those who share Hamas’ obsession with destroying Israel feel desperate that 70 years after Israel gained its independence, there is no sign that Israel will be defeated anytime soon.

In either case, blaming Israel for their desperation it is not a rational response. Gaza residents should protest against Hamas, not against Israel, but there are three reasons why they do not.

The first reason is that protesting against Hamas is very dangerous.  Hamas does not tolerate dissent, and it uses torture, unlawful confinement, and murder to suppress opposition.

The second reason is that Gaza protesters know that violence against Israel makes them heroes in the eyes of Hamas, and they are rewarded financially and through public recognition.

The third reason is that many Gaza residents agree with Hamas’ objectives. A poll conducted by the Palestinian Center for Policy and Survey Research in September 2017 shows that in Gaza, the Hamas leader Ismail Haniyeh had 62% support.

Regardless of whether Gaza residents are Hamas’ victims, Hamas’ puppets, or Hamas’ accomplices, they need to face the reality that Hamas and its ideology are their problem, not Israel.

If Israel was targeting civilians, there would be thousands of deaths every time that Gaza residents engage in riots at the border with Israel. The IDF certainly has the equipment to achieve such results if it so wished, but in fact, what we see is a minuscule proportion of deaths, even among terrorists. In one instance, for example, on May 11, 2018, 15,000 Gaza residents rioted and only one was killed. In another instance, on August 24, 2018, 5,000 Gaza residents rioted and no one was killed. These are typical numbers. And even among those killed, Hamas itself admitted that 50 out of 62 Gaza residents killed in border violence were Hamas members, not civilians.

When people look fairly at the situation, they see how far this lie is from reality. As an example, Raf Sanchez, Middle East correspondent for The Telegraph, wrote, “We got a sense of how careful Israel was to avoid civilian casualties during the airstrikes in #Gaza. The Israeli army called one guy we met and spent 45 mins on the phone with him, getting him to evacuate his neighbours, before they blew up a Hamas media building next to his.”

It is very obvious that Israel uses extensive restraint and that its objective is to stop the attacks against its citizens and against the integrity of its borders, not to cause civilian casualties.

The truth: No solution in sight

Israel has been trying since 2005 to contain the Gaza terrorists, but without success.

Some critics argue that what is missing is effective deterrence. Even though Israel fought three wars with the Gaza terrorists, these critics claim that in each case, Israel did not decisively beat Hamas, leaving Hamas with the hope that it can still defeat Israel.

The counter-argument is that for Hamas, the welfare of the Palestinians and even the lives of its own members are not the top priority, but rather that the top priority is the destruction of Israel. Consequently, it is argued that there is no amount of intimidation that can deter Hamas, short of a hugely devastating attack that Israel is too ethical to consider.

This sometimes then leads to the counter-counter-argument that for Israel to neutralize the terrorists, it may have to take control of Gaza again. But this too has its obvious flaws, including the likelihood of a high number of casualties among Israeli soldiers.

A potential solution that has been suggested is that Egypt could annex Gaza, but there is no sign that Egypt is interested in adding this on top of its other problems. As reported in Haaretz, Egypt has refused to annex Gaza in the past, and has treated its residents with contempt. It is not likely that Egypt has changed its mind.

The United Nations and world leaders have not advanced any solutions either, and they demonstrate hypocrisy when they lecture Israel while taking no responsibility in trying to resolve the conflict.

This is the truth about Gaza. 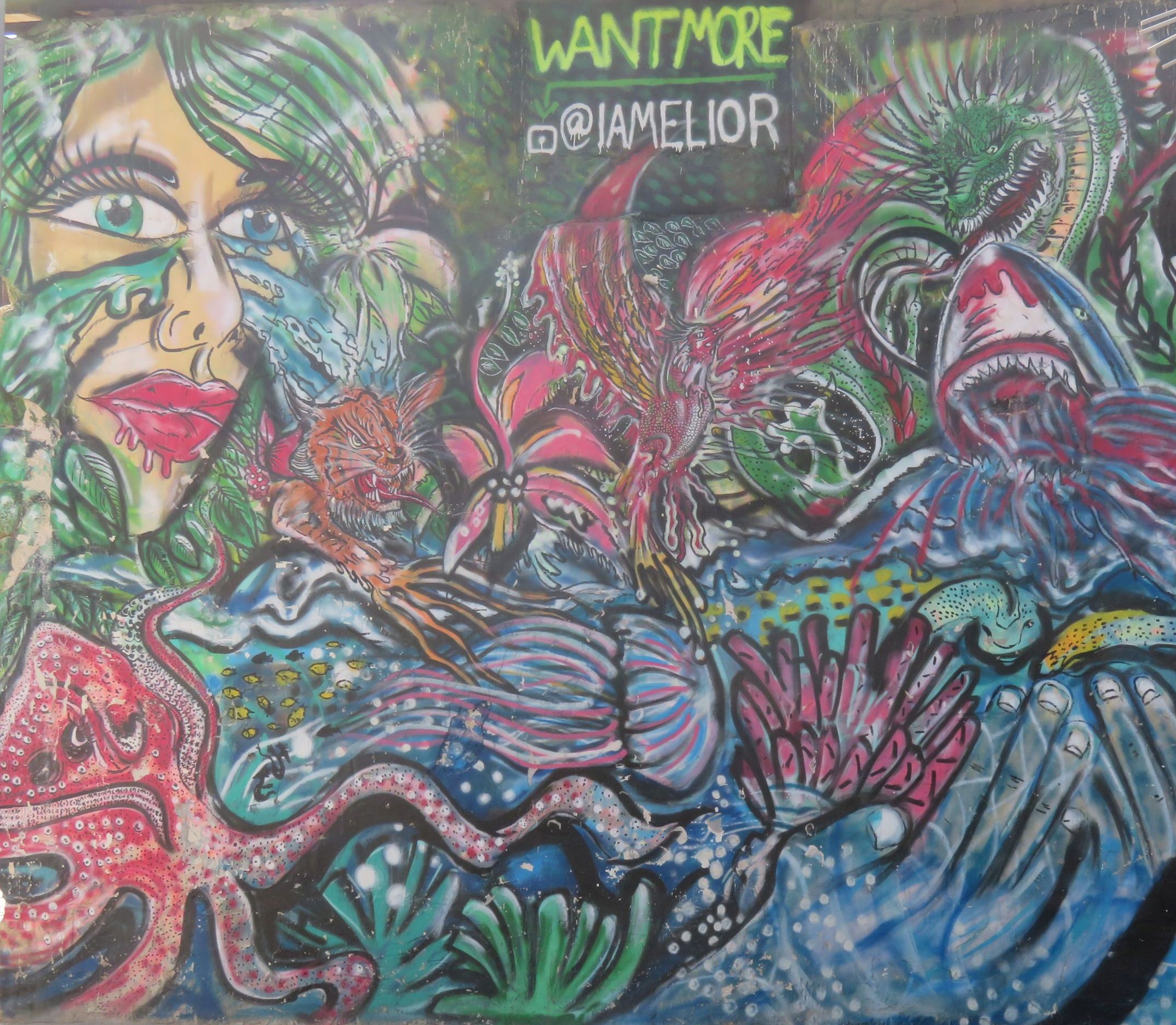 Mural in Tel Aviv that could very well be depicting the horror of war.
About the Author
Fred Maroun is a Canadian of Arab origin who lived in Lebanon until 1984, including during 10 years of civil war. Fred supports Israel's right to exist as a Jewish state, and he supports the Palestinians' right to self-determination in their own state. Fred supports a liberal and democratic Middle East where all religions and nationalities, including Palestinians, can co-exist in peace with each other and with Israel, and where human rights are respected. Fred is an atheist, a social liberal, and an advocate of equal rights for LGBT people everywhere.
Related Topics
Related Posts
Comments