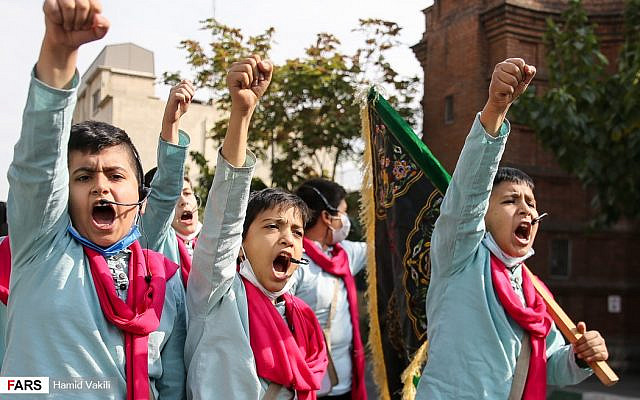 From Wikimedia Commons, the free media repository - Children of Iran

“We are not afraid of economic sanctions or military intervention. What we are afraid of is western Universities” — Ruhollah Khomeini

There lies an interesting reasoning; one which we, in our folly, completely failed to address, or at least not with the focus it warrants. As we continue to ponder over the threat posed by radicals – religious or otherwise, we may have omitted to recognise the traction ideologues have gained over the decades by targeting young minds, moulding future generations to espouse their warped worldview, in complete antagonism to the West, playing education and indoctrination as weapons of war.

As it were the battlefield was moved a long time ago … if only we had paid attention!

From the streets of war-torn Ukraine, to that of Iran or Gaza (to name but a few) radicals are hell bent on buying more minds to their nihilisms, the younger, the better – never mind the trauma such agendas ultimately translate into. And though the narratives employed may differ slightly depending on its agents’ politics, the similarities in methods are frightening; especially if we consider that such efforts of re-education have long breached our borders. Through their respective networks of NGOs and other so-called charitable organizations, these new modern-day fascists have made a home in our homes, spewing their messages of hate whilst hiding behind the great banner of free speech – but more on that some other time.

From UNRWA’s distribution of antisemitic materials to Palestinian school-children to Iran’s constant clamors of Jihad against the Great Satan that is the United States of America and President Putin’s ‘Summer Camps’ for Ukrainian children, it is our future which ideologues ambition to re-write.

The threat posed today to Western values, such as democratic advancement, free speech and human rights,  is immense, so much so in fact that asserting their worth has often been labelled under the much despised title of neo-colonialism and white privileges. If only we had had the foresight to stand up to such manipulation and assert our belief system – even if that meant offending a few well-to-do demagogues … actually especially if it meant upsetting a few well-to-do demagogues. After all, isn’t it true that offence is the ultimate form of narcissist entitlement? To imagine walking through life without ever being offended denotes of a particular arrogance.

Unfortunately for us, and much to our undoing, before the verbal assaults of radicals we have opted for appeasement and offered no meaningful rebuttal. Much of radicalism’ s advances today have been  tied to its henchmen’s abilities to project their narrative outward onto the world – often piggy-backing on our Western institutions, to capture the youth. Education is as much our first line of defence as it can be our downfall.

Indoctrination, whether religious or political, whether from the lips of the Islamic Republic or that of the Kremlin sits a cancer eating away at our democracies. It may be high time we put a pin in it as the alternative would be simply too unpalatable.

With Russia, as with the radical Islamic states of the middle east, we are faced with future generations who are pre-programmed to not only despise western values, but raised in the belief that only through absolute annihilation could the ills of the West be set right – before such nihilism one can only shudder in disgust, but then again the argument that the West is evil is not exactly new. It is rather the systematic intent behind the undermining of our institutions which is cause for concern – that and the fact that we are profoundly failing in our duty of care for the young.

Like Iran, Russia has turned increasingly aggressive with its propaganda, resorting to methods which speak of a history we would all rather not see repeated. Parents in Ukraine have been forced by the Russian occupying forces to enroll their children to re-education centers, and if not face the possibility of having their sons and daughters taken to the nearest Russian-run orphanage.

Just as the 1979 Islamic Revolution in Iran put an instant stop to the nation’s democratic advancement, making room instead for the rise of the ayatollahs and their very particular brand of theo-fascism, Russia has witnessed too a dramatic shift towards ideological authoritarianism over the past 20 years. On both accounts we collectively failed to make adequate provisions to counteract their advances rather we have maintained an increasingly irritating reactive stance.

A case can be made here for education and the protection it can offer against indoctrination, radicalization, and ultimately the rise of cult-minded communities. Of course such efforts would require resources to be made available and policies to be drafted. A good place to start would be to offer access to television programs which do not cater to any propaganda but instead would offer children respite from the nauseating malicious lies they are being subjected to.

To sit on the side-line while children are made to suffer such abuses would be a grave mistake, one which we will pay for for decades to come as they reach adulthood to pick up the guns left by their handlers.