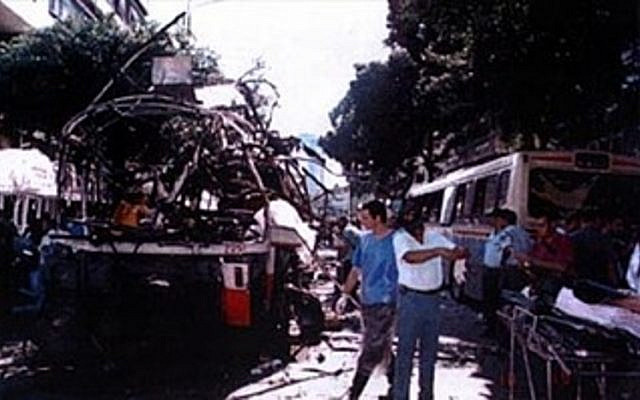 The suicide bomber that sent hundreds of pieces of shrapnel tearing into Gila Weiss’s body when she blew herself up at a bus stop next to Mahane Yehuda market in Jerusalem in 2002 was a 21-year-old Palestinian woman disguised to look pregnant.

The bomber, Andaleeb Taqataqah, was recruited by Aksa Martyrs Brigade – controlled by Fatah, which, at the time, was controlled by Yassir Arafat.

Weiss, then 31, was so badly burned and disfigured by the blast that her roommate was able to identify her only by the nail varnish on her toenails – her feet protected, she later noted, by the “brown leather Naot brand mini-boots that covered my feet up to right below my ankles”.

Nearly every part of Weiss’s body was pierced by shrapnel – bits and pieces of metal, glass, wood, pebbles, and plastic from objects damaged or destroyed by the blast, as well as, more than likely, pieces of the suicide bomber herself. Despite the many surgeries she had to endure, the doctors weren’t able to locate or remove every last piece, and, to this day, projectiles from that horrible day remain in her body.

The bomb which tore through Weiss was manufactured from three tubes of plastic explosives and a battery, which were placed in a black purse to camouflage it.

On the day of the attack, the terrorist was driven to Abu Dis and from there she took a taxi to Jerusalem and made her way to the Shuk. When the terrorist realized that everyone was being checked at the entrances to the market, she turned around and walked towards the nearby bus stop, opposite Hava Bakery. There, she waited a short while, until a bus arrived. When the driver opened the door, and the passengers began getting on and off the bus, she blew herself up – killing 6 people, and injuring a total of 105 (including Weiss).

A number of days prior to the attack Taqataqah was videotaped dressed in black and holding a Koran.

In the introductory post for her blog (called, My Shrapnel) – which she launched shortly after the attack – Weiss speaks of the powerlessness she felt:

“But this is too terrifying and you cannot accept it. You want to believe that, when this happens to you, you will be on notice. You will be able to fight for your life. If you see the terrorist, you can dodge. If you feel the heat of the explosion you can turn away.”

“If you feel the shrapnel entering me, you can declare to yourself: “I will not die” and force the breath in and out of your body. Knowledge is power.”

“How can you possibly accept a vision of yourself as without power, as powerless? How can you accept a picture of yourself knowing nothing, and having absolutely no option or opportunity to fight? How can you just die, without even realizing that anything hit you. One moment you exist. The next you do not. This shakes you to the soul.”

The two hours I spent with Gila in 2010, on an organized bike tour near Mesilat Zion – 7 years after the attack – through often hilly and challenging terrain that afternoon suggested that she had largely recovered from her injuries and that the reconstructive facial surgeries were clearly successful.

What most struck me when reading Gila’s blog posts following the attack was that the thing which shocked her the most, the element of the assault that she simply couldn’t accept, was her complete powerlessness in the face of an enemy who strikes at civilians arbitrarily, wherever the ”opportunity” presents itself, and without warning – without even a second to fight back.

From 2000 until the end of 2005, there were over 1,100 innocent Israeli men, women, and children killed in such attacks and more than 7,000 wounded – many of whom suffered catastrophic injuries (such as severe burns, amputated limbs, paralysis, etc.) that they are forced to deal with for the rest of their lives – a constant reminder of the brutal attack which changed them forever, and one which, like Weiss, they were powerless to resist.

(Tomorrow will mark the 20th anniversary of the start of the 2nd Intifada. Like most Israelis, I know one of the victims of the five year reign of Palestinian terror.  This essay, previously published at CAMERA UK, is an attempt to briefly tell her story.)