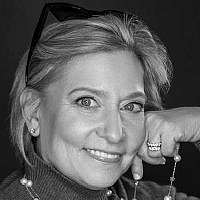 The Blogs
Nina L. Kampler
Apply for a Blog
Advertisement
Please note that the posts on The Blogs are contributed by third parties. The opinions, facts and any media content in them are presented solely by the authors, and neither The Times of Israel nor its partners assume any responsibility for them. Please contact us in case of abuse. In case of abuse,
Report this post.

Growing up in the simple Philadelphia of the 1960’s, without as much as an encyclopedia for reference and just a single television console broadcasting a total of three black-and-white channels, I relied on my imagination to illustrate the stories my Holocaust surviving family exchanged. The portrait of Germany I envisioned was drawn from the raw material of my father’s experience: born in Frankfurt in 1920, his happy childhood years skidded to a hard stop when he was boxed off to Sachsenhausen where he would somehow survive an entire six-year incarceration. In the Germany of my mind, the air was colorless, the buildings uni-dimensional and fabricated from mud and rocks, dogs were barking in Teutonic tones, and a slush of watery turnip soup ladled into a tin cup in the bitter cold.

When I finally left the US for the first time, I was a teenager in college, so typical of the era then when travel was a commodity for the wealthy and leisure class, and Holocaust survivors were allergic to wanderlust. Squirreling away funds so that I could backpack through Europe on the return from my junior year in Israel, I planned to visit Dachau in Munich, go on to Frankfurt, and then to Berlin to see Sachsenhausen. I never made it beyond Munich. I still recall laying awake in that youth hostel, after visiting Dachau, imagining the pounding of the storm troopers’ boots as I heard the uniquely European sirens screaming through the night. By the next morning I was headed to another country, one that had not killed my grandparents or tortured my father. It was not until many decades later, when my husband and I visited our own son who was spending his junior year abroad in 2008, that I possessed the emotional strength to venture back to Germany to step inside the miasma my father had called home for six unfathomable years.

It is an understatement to say that I was anxious about this visit. The day before we were to go to Sachsenhausen, we were walking through the Jewish Museum in Berlin when I was approached by a security guard who politely reminded me that the rules required me to check my coat. It was a chilly March day, and I definitely was cold, but what I really felt was explosive rage at the German nation. I screamed at the guard, wrapping my arms tightly around my coat as if it were armor assuring my survival. “My father froze for six long winters a few kilometers from here. How can you ask me to surrender my coat and relinquish my right to be warm?”.

And then the following morning, sitting in the reserved hotel dining room having breakfast before we were to take the commuter train to the nearby suburb of Sachsenhausen and its eponymous concentration camp, I performed my typical mommy-in-the-morning-on-a-trip routine, smearing apricot jelly on bread and stuffing it into my purse for later. My husband looked at me quizzically as if I were preparing for a daylong alpine hike, and I yelled out in a decibel not often heard in quiet German restaurants: “How can I go to a concentration camp without taking a suitcase of sandwiches? I am afraid to be hungry for even a nanosecond”.

A Sachsenhausen Memorial public relations official accompanied us on our visit that day, treating us like royalty. We entered the barracks that my father had described to me so many times. The Jewish barracks, number 36, that was standing, meticulously restored with Germanic perfection to historical accuracy. There were the rows of bunk beds and paper-thin straw mats where my father had slept head to toe, bodies pressed for warmth, usually discovering that someone had died overnight. And there was the latrine where he had just seconds to urinate on command. And there was the isolated broken water tap that served all purposes. And then I saw the benches that were not part of his story, because they did not exist before 1945, and were added in to suggest that the inmates may have had a chance to sit, may have had a book to read, may have had energy to socialize, may have had food to eat. But I saw those benches that suggested a better day, and disregarding the “please do not eat in these buildings” signage, I opened my bag and spread a picnic of jam and rolls that could have sustained a person for a week. Again my husband looked at me, but this time I cut him off: “Daddy starved here for six years, how can we NOT eat?! We must eat, to pay tribute and honor to his survival.” And our official guide understood and joined us, acknowledging that eating today meant that we would never be hungry here again.

And then, as we stood together at the crematorium, my husband and son pulled their tefillin from their backpacks,and wrapped themselves in the ancient straps binding them to the memory of my father and the grandfather I never knew. With each word of the Kaddish they recited, I felt an unleashing, a literal melting of the storehouse of anger that I had been harboring since my childhood. My father’s grandson had come back to bear witness to his survival, the camp was a mere monument and the Nazis no longer in charge. He had lived, we were thriving, and this was the victory lap in our family’s German story.

I grew up understanding that my father’s plans to become a lawyer were thwarted by Hitler. He never went on to college, yet alone law school, and I somehow always knew it was my destiny to pursue his goals as his eldest child. So, when I was invited to speak at a European Law Forum this fall, as the only American lawyer bringing my viewpoint to a gathering of retail real estate and legal professionals in Berlin, I was granted the chance to come full circle. And with the ability to freely fly back to the very city in which his dream of becoming a lawyer was extinguished, I will proudly represent the family he created, wear the banner of a very proud American Jew, carry the flag of an ardent Zionist and bear witness that he not only survived but that we had won.

So as our world again turns upside down, as evil spreads its poisonous roots threatening the stability of our western civilization, and as terrorist incidents are escalating worldwide, I am electing to leave the comforts of my home and my family for this Thanksgiving weekend and travel back to Germany. The joy of gathering around my dining room table with the people I love most on this planet will be postponed until next month. Instead I will stand tall as my father’s daughter the lawyer, as I fulfill his aspirations and honor his memory in Germany this Thanksgiving. And for that opportunity I am deeply grateful and very blessed.

About the Author
Nina Kampler is a lawyer and a retail real estate strategist living in Teaneck, New Jersey. She is married to Zvi Marans, and the mother of four children.
Related Topics
Related Posts
Nina L. Kampler
Comments