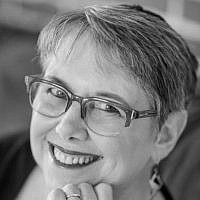 The Blogs
Dayle A. Friedman
Wisdom + Spirit Beyond midlife
Apply for a Blog
Advertisement
Please note that the posts on The Blogs are contributed by third parties. The opinions, facts and any media content in them are presented solely by the authors, and neither The Times of Israel nor its partners assume any responsibility for them. Please contact us in case of abuse. In case of abuse,
Report this post.

I have been saying Kaddish with a daily minyan since my Dad died this past August. Saying Kaddish has brought me to morning services at my home synagogue, as well as to numerous others in congregations in places I have worked or visited.

The requirement of saying Kaddish in a minyan forced me to be with others at precisely the moment that I felt like crawling up into a ball and hiding at home. As the months have marched on, I have appreciated this daily space in which I have no other role than to be a mourner. I have been buoyed by the kindness of total strangers. I have been glad to be able to reach out to the newer members of the club, those who have joined in the minyan after more recent losses. Davening in a minyan feels like being surrounded in a warm, consoling embrace.

Upon learning that the Israeli musician, Arik Einstein, had suddenly died last month, I found myself participating in a different kind of minyan—a virtual community of mourners—thanks to social networking and digital technology.

I was stunned by how hard I was hit by the loss of the artist called Israel’s “national singer.” I just couldn’t stop crying. It was Arik’s music I heard when I was 17 and falling in love with Israel. It was his songs that accompanied me through two stints of living and studying in Israel. And it was his piercing voice that has always immediately transported me to that heady and hopeful time in my life, and in the life of the Jewish state.

Initially, I was alone with my grief. No one in my house knew Arik’s music, and I could not explain why I felt so sad at the loss of a person I had never met. Then my Facebook feed filled up with postings about the death. Close and virtual friends––people both a generation older and younger than me, who represent many points on the Jewish religious and political spectrum––reported what Arik’s music had meant to them. I was captivated by heartfelt reminiscences, as well as by listings (with video links) of favorite songs. I watched the shock with which the news of Arik’s death was greeted at a concert of his friend, musician Shlomo Artzi, and saw the crowd spontaneously belt out Artzi’s –song, “Where are the people like that man?” as Artzi sat, frozen, and disconsolate.

Through Israeli and American Jewish news sites, I stood in Rabin Square with the thousands of mourners who gathered to pay their respects. I read President Peres’ tribute: “Einstein’s songs are the soundtrack of an entire nation.” And I heard the eulogy tearfully delivered by Arik’s dear mehuten  (father-in-law of his two daughters), Rabbi Uri Zohar: “One small flame of oil – that was you. We know that you did so much good for so many people – not because you were a singer or an actor, but because you were a person.”

We often criticize digital and social media as diversions from real connection. But this week, it was these electronic links that drew me closer to friends and strangers, to my own feelings, and to Israel. Just as davening with a minyan has given me solace in grieving for my father, so, too, has the virtual community soothed and inspired me at a time of loss. Martin Buber taught, “All real living is meeting.” Little did he know that a click of a key or a swipe on a screen could bring sacred connection and comfort.

About the Author
Rabbi Dayle A. Friedman is a spiritual leader, scholar and spiritual caregiver. She offers education and spiritual guidance on the journey of aging through Growing Older, her Philadelphia-based, national practice (www.growingolder.net). She serves as interim rabbi at Congregation Leyv Ha-Ir~Heart of the City in Philadelphia. Her most recent book, Growing Older: Finding Your Grit and Grace Beyond Midlife (Jewish Lights Publishing, 2015).
Related Topics
Related Posts
Dayle A. Friedman
Comments